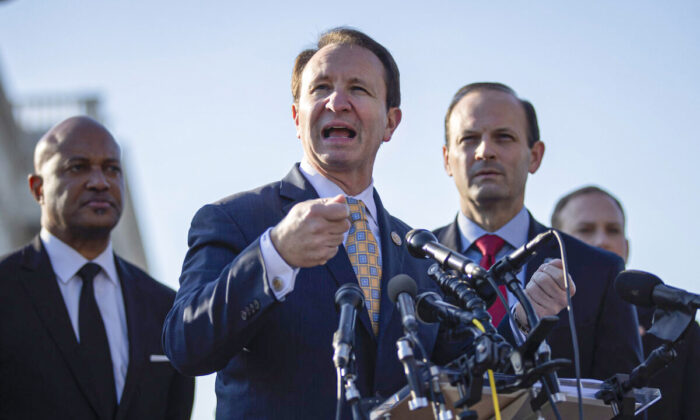 Louisiana Attorney General Jeff Landry is vowing to ask the U.S. Supreme Court to prevent the Biden administration from recalculating and using the “social cost” of carbon emissions, a metric used in climate regulation that critics say needlessly drives up operating costs for businesses and prices for consumers.

Critics have long said that the classification of carbon dioxide, the gas humans expel from their lungs when breathing, as a pollutant makes no sense. Carbon dioxide is essential to life on the planet and is used in the process of photosynthesis, which spurs plant growth. But environmentalists claim that human-created carbon dioxide contributes to climate change.

The social cost of carbon, a measurement in dollars of the damages supposedly caused by releasing a metric ton of greenhouse gases, is used by policymakers to provide cost-benefit analyses and to write regulations. Placing a monetary value on the effect of the gases gives federal regulators ammunition to justify tougher environmental regulations.

In February, U.S. District Judge James D. Cain Jr. of the Western District of Louisiana, agreed with Louisiana and nine other states, issuing an order blocking the use of the interim metric. The states told Cain, who was appointed by Trump, that the metric was arbitrary and would boost the cost of producing energy and hike regulatory costs for states.

At the time, Max Sarinsky, an attorney at the Institute for Policy Integrity at NYU Law School, said Cain’s injunction might not survive.

“This injunction is extraordinarily broad,” Sarinsky told Axios. “I think it will receive very, very close scrutiny on appeal.”

In mid-March, the U.S. Court of Appeals for the 5th Circuit stayed Cain’s injunction at the request of the Biden administration in an emergency application. The appeals court held that Louisiana and the other states challenging the metric had raised “merely hypothetical” claims of harm and that they probably didn’t have legal standing to take action in court.

Greenwire reported that days later, the states asked the 5th Circuit to hear the case, arguing that allowing the use of the social cost metric “lets one of the most consequential regulations in history remain in effect … despite the irreparable harm it’s causing the states.” The appeals court denied the rehearing.

“We are disappointed in the 5th Circuit’s decision, and we will appeal to the Supreme Court,” Landry’s office told E&E News, a trade publication. “Attorney General Landry will continue fighting the Biden administration’s attempts to inject the government into the everyday lives of Americans.”

Landry’s comments come as the Supreme Court is considering West Virginia v. EPA, which the court heard on Feb. 28.

West Virginia Attorney General Patrick Morrisey previously told The Epoch Times that he hopes the Supreme Court will use the case to rein in the far-reaching powers of the U.S. Environmental Protection Agency (EPA) to shut down carbon dioxide-generating industries without regard to the economic well-being of those affected.

The problem is that the EPA is trying to transform itself from “an environmental regulator into a central energy planning authority,” according to Morrisey, a Republican.

West Virginia is a major producer of coal, natural gas, and crude oil. West Virginia and 18 other states are challenging the authority that the Clean Air Act provides to the EPA. The challengers hope the high court will resolve whether the U.S. Constitution gives Congress the power to delegate regulatory authority to the EPA to limit so-called greenhouse gas emissions.

The challenge comes years after the Supreme Court ruled 5–4 in Massachusetts v. EPA (2007) that the agency can regulate greenhouse gas emissions such as carbon dioxide as “air pollutants” under the act. In the decision, the court called climate change “the most pressing environmental challenge of our time.”