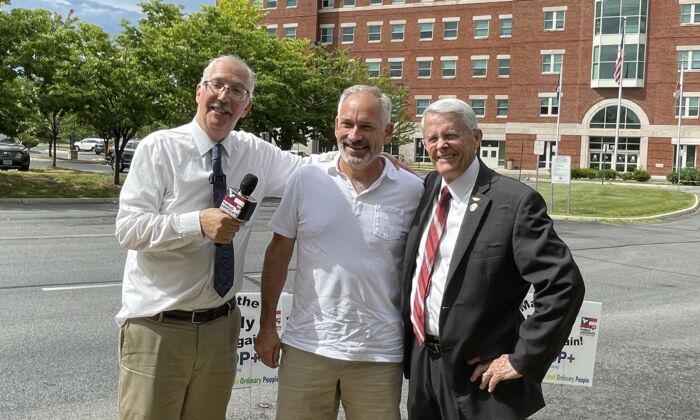 Jon Tigges, a parent who was arrested at a Loudoun County School Board meeting in Virginia on June 22, said he received “outpouring” support from across the country. In addition to receiving phone calls, texts, and tweets, Tigges picked up snail mail the day before upon returning from camping. “It resonates with so many people just how close we are to collapse as a country. They are cheering for us,” he told The Epoch Times on July 1.

“One of the blessings and unexpected secondary consequences of censorship has been that people only feel comfortable sharing face to face because they don’t want to get doxed or they don’t want to lose their job,” said Tigges. So he started “Patriot Pub,” a weekly in-person gathering in mid-April. At these meetings, people dined, discussed, and cussed together. “And the stuff we cuss about, we decide we’re going to do something about it, and that’s begun in the room.”

Six of the Loudoun County Public Schools board members allegedly infiltrated a private Facebook group to collect a target list of parents opposed to critical race theory and dox them. Some parents obtained screenshots and reported them to the county sheriff’s office. The case is currently under investigation.

Former state senator Dick Black, dubbed by his constituents in the board room as “the man who brought down the house,” was the last speaker from the public at the June 22 school board meeting. The school board ended public comment and retreated from the board room immediately after Black’s speech.

Speakers self-organized lines on both sides of the aisle and carried on making comments as scheduled, without the school board present. People who couldn’t speak as scheduled needed to stay and talk to “let it out of their system,” according to Tigges.

Both Tigges and Black returned to the Loudoun County Public School Administration building on July 1 as a part of the live streaming event with Eugene Delgaudio, president of Public Advocates, a conservative activist group. Both recalled that the school meeting began with a dozen speakers lauding the school board and supporting the transgender policy 8040 (pdf), an item on the agenda. Then the rest of the speakers, one after another, criticized the school board or urged the board members to resign before the recall effort collected enough signatures.

Black scolded the school board for developing an enemies list and called the board members’ behavior disgusting. His criticism led to rounds of loud applause from the crowd. More and more people stood up to show their support.

Black explained how he decided to attend the Jun 22 meeting: he had been following the news that more and more people have been participating in county school board meetings. In addition, transgender policy 8040 guides teachers to address students in their preferred pronouns. As a result, a boy can go to the girls’ bathroom if he self-identifies as a girl. “At this point, I felt like it was necessary for me to get out, to get involved, and just to lend my weight to what was going on,” he told The Epoch Times.

Tigges got involved through a different journey: he sued Virginia Governor Ralph Northam in 2020 for extending COVID-19 lockdown, which he described as what “activated” him to be more involved in local policies. He shared that after 20 years of serving in the military, he managed to get out of the government and live on his farm in Loudoun County. Then COVID-19 came, and Northam’s order forced him to keep his business closed.

He added, “I realized the government could unilaterally seize my property by shutting it down and discriminate against me, in terms of my business being somehow different than a large corporate business.”