Loudoun County Parents Press On With Calls for School Board Resignation 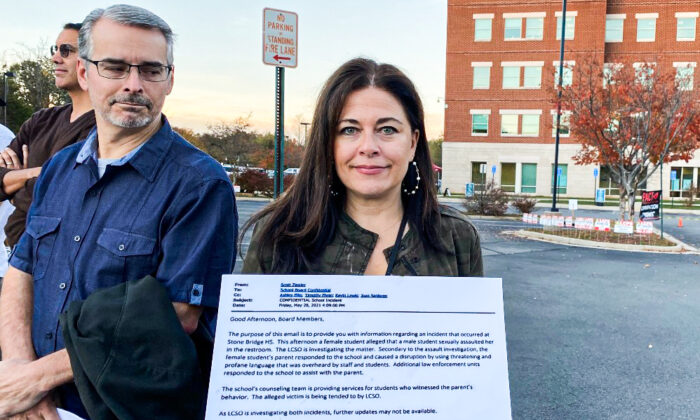 A Loudoun County resident holds a sign of Loudoun County Public Schools (LCPS) Superintendent Scott Ziegler’s email on May 28, 2021—notifying the school board of a sexual assault case in a high school bathroom—outside the LCPS administration building in Ashburn, Va., on Nov. 9, 2021. During a June 22 school board meeting discussion on LCPS pro-transgender policy, Ziegler said he wasn’t aware of sexual assaults in school bathrooms. (Terri Wu/The Epoch Times)
By Terri Wu

While the Virginia gubernatorial election last week saw a win for conservative candidate Glenn Youngkin, parents told the school board that their fight wasn’t over yet.

“We are still here,” repeated residents in their public remarks.

“This has always been about our children, not an election,” said one mother. “Never underestimate the determination of a mama bear when her cubs are under attack.”

About 100 people signed up to speak in person at the school board meeting on Tuesday evening. Many criticized the Loudoun County Public Schools (LCPS) Superintendent Scott Ziegler and the school board for allegedly covering up a sexual assault case in a high school bathroom. He later passed a pro-transgender policy that allows students to go to the bathroom of their self-identified gender.

Speakers also questioned whether the law firm Ziegler hired could truly conduct an independent investigation on his handling of sexual assaults in LCPS.

Ziegler had emailed Loudoun County School Board (LCSB) about a sexual assault case in Stone Bridge High School on May 28. Yet, at the June 22 LCSB meeting, the superintendent said, “To my knowledge, we don’t have any records of assaults occurring in our restrooms.” Ziegler acknowledged on Oct. 15 his statement was false, but said he misunderstood the question.

Public viewing of the parents’ comment session was not allowed, so county residents held a rally outside and watched the live broadcast of the meeting together.

Ian Prior, executive director of local advocacy group Fight for Schools, said at the rally that Virginia gubernatorial election was not his organization’s main objective. It is “to have a school board that doesn’t put politics into education, that focuses on the basics.”

“The bottom line is we came out here to hold this school board accountable,” said Prior. He announced that his organization had collected enough signatures—25,000 over the past six months—to initiate the recall process for targeted board members.

“The first day that we got signatures was on May 8, and it hailed. It was windy; it was rainy, and then it was sunny and warm, and then the cycle would repeat itself,” Prior said, recalling the dedication of local volunteers. “The last day we got signatures was on election day, and it was nasty out—it was raining, freezing, but people stayed out there from 6 a.m. to 7 p.m.”

Prior added that people signed to recall LCSB members for many reasons, including pro-transgender policies and Critical Race Theory (CRT).

“What’s someone really like? Observe what they love and who they love. My observation is that you love CRT,” a county resident said to the school board.

CRT advocates for critiquing social problems through the lens of racial struggle and argues that racism is inherent in the foundational values of Western societies. As such, it seeks to fundamentally transform social institutions to end racial oppression. LCPS has repeatedly said that it doesn’t teach CRT in classrooms, and that it teaches a standard curriculum designated by the Virginia Department of Education.

Scott Mineo, founder of local advocacy group Parents Against Critical Theory (PACT), told The Epoch Times that parents might read some lesson plans or paragraphs and walk away thinking “that wasn’t too bad,” “but the trick is being able to read critically” and identify CRT terminologies such as “transform,” “transformation,” “transformative group,” “grouping,” and so on.

In response to such changes of terminologies, Mineo said PACT would help teach parents to identify different portrayals of the theory. He added the current CRT manifestation was “Social Emotional Learning” (SEL). Loudoun County uses programs provided by Second Step in elementary and middle schools for SEL.

“Critical Race Theory is not a part of the LCPS curriculum,” LCPS Public Information Officer Wayde Byard said in an email responding to Epoch Times’ inquiry about SEL and Second Step programs.

Former Virginia State Senator Richard Black, who spoke at the rally on Nov. 9, called out mainstream media outlets for repeating a “lie” that CRT is only taught in universities, but not in public schools.

“Critical Race Theory is as prominent as it is clear as the nose on your face,” Black said.

National Education Association’s (NEA) annual meeting in 2021 decided NEA would “fight back against anti-CRT rhetoric.” “It is reasonable and appropriate for curriculum to be informed by academic frameworks for understanding and interpreting the impact of the past on current society, including critical race theory,” NEA’s document (pdf) reads.

Mineo said that part of PACT’s education campaign included countering the labels placed on parents who object to CRT, such as that they are involved in “white race politics” or were responding to “dog whistle” politics.

Loudoun County resident Michael Rivera, who is running for the LCSB seat vacated on Nov. 2, such labels are “irrelevant and inaccurate.”

Rivera said he made the decision to run, with his wife.

“We talked about the commitment. It’s going to take away from my family life. But we both feel strongly enough because we have a child that’s in middle school, that one of us needs to step up and do something,” he told The Epoch Times.

‘We Are Going to Loudounize This Country”

“We are going to Loudounize this country because it doesn’t stop here,” declared Tiffany Polifko, PACT’s vice president of education and outreach, to the Loudoun school board members.

To Mineo, “Loudounize” means “what we have all done to really blow up this county, figuratively.”

These people needed to be exposed with facts, Mineo added.

He said that other counties in Virginia and the rest of America have contacted him for help addressing this issue in their own communities.

Work is already underway to expand this movement across the country.

According to founder and CEO Jon Tigges, Patriot Pub Alliance, a platform for secure collaboration and communication, has drafted a business plan to replicate what Loudoun residents have done in other counties. “We’re encouraging local communities to start meeting together face-to-face, grow in trust, and form a coalition united in purpose,” he told The Epoch Times.

Prior of Fight for Schools told The Epoch Times, “The work of the Loudoun County parents to hold their school board and their schools accountable was an inspiration throughout the state.”

“We have shown the ability to execute strategy and tactics at a high level,” he said, adding that Fight for Schools would be happy to support other counties, especially for local school board races.

Locally, the group’s focus will be the two special LCSB elections next year, and the board general election in 2023, Prior said.