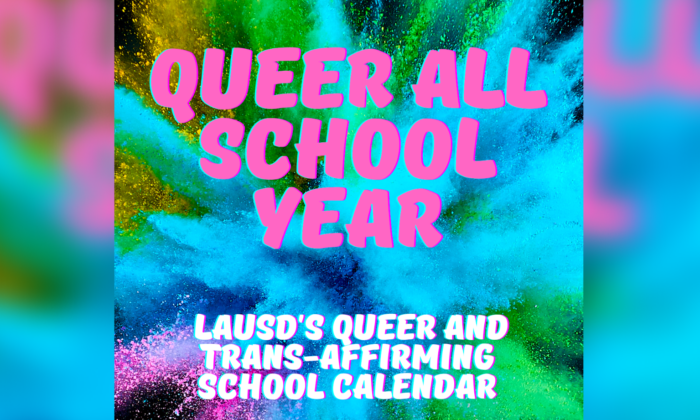 First introduced during the 2020–2021 school year, the “Queer All School Year” calendar (pdf) lists monthly activities instructors can use in their classrooms to show that “LAUSD’s got pride all year long.”

The publicly accessible document recently gained media attention after being reported June 30 by Parents Defending Education—a national nonprofit aimed at “empowering parents to advocate for classrooms that educate—not indoctrinate,” according to its website.

Start the Year With a ‘Rainbow Club’

The calendar suggests teachers kick off the school year in August by creating a genders-sexualities alliance (GSA) or a “rainbow club” on campus and provides links to a 10-step guide by the national GSA Network on how to form a club and register it with the larger network.

The network changed its acronym’s meaning in 2016 from “gay-straight alliance” to “genders-sexualities alliance” in order to “moved beyond the labels of gay and straight, and the limits of a binary gender system,” according to a statement.

The district’s 10-week virtual “rainbow club” for K–5 students this year started on Sept. 7 (pdf), meeting on Wednesdays in the afternoon.

However, there’s a disclaimer under the district’s workshop and event listing page, which includes LGBT club meetings and consultation groups.

“Organizations, references, links, products or services that appear on this site do not constitute an endorsement of the Los Angeles Unified School District (LAUSD),” the statement read in part.

Brenda Lebsack, a teacher of 30 years and a former school board member for Orange Unified School District, told The Epoch Times that the student-led approach to defining and affirming gender and sexuality is “like giving schools a blank check to affirm any identity based on a child’s whim.”

September is all about getting educators ready to “teach LGBT-inclusive curriculum all year long” by reminding them about the 2012 FAIR Education Act, a California law that requires history and social studies classes to include the contributions of people with disabilities and those who are lesbian, gay, bisexual, and transgender.

Also, teachers are asked to prepare for October’s “Solidarity Week,” for which the calendar links to a webpage by GLSEN (Gay, Lesbian & Straight Education Network), an organization that has been “championing LGBTQ issues in K-12 education since 1990,” according to its website.

GLSEN defines the week-long activity as “a student-led program where LGBTQ+ students and educators in K-12 schools lead the conversation on how non LGBTQ+ people can be in solidarity with them and also how they can show solidarity with others in their community.”

According to an analysis by Parents Defending Education, GLSEN systematically advances its transgender agenda among children by providing free resources to schools nationwide for teacher training, school policy guides, curriculum, and GSA clubs.

GLSEN has been promoting “LGBTQ-visibility and integration in elementary schools,” according to an educator guide on its website.

“While many LGBTQ+ inclusive school supports begin in middle or high school, it is critical for elementary schools to establish a foundation of respect and understanding for all people,” the guide reads.

October is declared “LGBT History Month,” and educators are called to attend the district’s “Standing with LGBTQ+ Students Conference,” which was held in 2021. It is unclear whether the conference will come back this year.

In November, teachers are encouraged to obtain badges, “pronoun pins,” and LGBT history posters from the district’s Human Relations, Diversity & Equity office, according to a guideline (pdf) provided on the calendar.

Under the district’s current policy, there are three ways to “support gender diverse students”—informal, unofficial, and official/legal, according to its “Gender Identity Support Discussion Guide” (pdf) released in August. If schools become aware that a student would like to go by a different name or pronoun, teachers are instructed to explain the three options to the student.

At the informal stage, teachers must address students by their preferred name and gender identity in interpersonal interactions, without requiring parental notification or permission.

Though no changes are made to school or legal records at this stage, students already have “the right to access the facilities and activities that affirm their gender identity, regardless of legal name or sex assigned at birth,” according to the guide.

At the unofficial stage, students can have their name and gender changed in most district-generated documents with a parent or guardian’s signature, and the final official or legal changes across the student’s records can be triggered by a court order showing the changes are permanently recognized.

In December, the calendar suggests teachers post “LGBTQ-affirming signs” in their offices, classrooms, and around campus, with a link to a “Safe Space Kit” from GLSEN.

The kit includes posters and a booklet with “concrete strategies that will help you support LGBTQ students, educate about anti-LGBTQ bias and advocate for changes in your school.”

For January, the calendar suggests “[reading] inclusive books in every grade.”

Each classroom is encouraged to host a reading session at a school, library, or community center featuring transgender-promoting books such as “I Am Jazz” – a semi-autobiographical story by Jazz Jennings, a television personality who began a transition from male to female at the age of six.

The event would be a part of the annual “Jazz & Friends National Day of School and Community Readings” promoted by the Human Rights Campaign, the largest LGBT political lobbying organization in the country.

Other options on the event book list are “Julián Is a Mermaid,” which tells the story of a young boy who wants to dress as a mermaid and participate in a parade, and “They She He Me: Free to Be!” which teaches children about gender pronouns.

In February, students are invited to participate in the “Black Lives Matter in Schools Week of Action,” linking to the “13 Guiding Principles” created by Black Lives Matter at School—”a national coalition organizing for racial justice in education,” its website states.

Two of the principles are “queer-affirming” and “trans-affirming.”

“When we gather, we do so with the intention of freeing ourselves from the tight grip of heteronormative thinking or, rather, the belief that all in the world are heterosexual unless s/he or they disclose otherwise,” the rules state. “We are committed to … doing the work required to dismantle cis-gender privilege and uplift Black trans folk, especially Black trans women who continue to be disproportionately impacted by trans-antagonistic violence.”

In the spring, educators are tasked with reviewing LGBT affirming practices with their schools, parents, and students to “ensure everyone’s name and gender pronouns are affirmed” and to “address any gender or sexuality-based teasing, bullying, and conflict restoratively.”

Finally, in June, teachers are asked to share LGBT literature, art, music, and posters with students.

Books on the list (pdf) include “Wandering Son, Vol. 2,” by Shimura Takako,” a manga comic for children featuring two transgender protagonists in the sixth grade, and “This Book is Gay” by Juno Dawson and David Levithan, an information guide for youth on “[the LGBT] experience, including terms, religious issues, coming out, and sex acts,” according to the book’s description.

When asked about the calendar, an LAUSD spokesperson told The Epoch Times in an emailed statement that the district seeks to provide “safe and affirming learning environments” to “support and respect the diversity of our students and families.”

However, some education leaders expressed concern with the lack of “viewpoint diversity” within the calendar’s resources.

Erika Sanzi, mother of three children and the outreach director of Parents Defending Education, said “[e]ducation should be presented in a way that’s apolitical, so that there isn’t one ideology or one belief system that’s presented to kids exclusively.”

“With this curriculum, they’re not even exposed to the other arguments. Kids should be able to hear the best, most compelling arguments on both sides of an issue,” she told The Epoch Times.

She said teaching topics like gender identity and sexual orientation are “completely developmentally inappropriate,” especially for those as young as kindergarten, and unfairly removed parents’ involvement in their children’s development.

“[The district] is almost cutting parents out of the equation of deciding when their children are ready to learn about certain subjects and how you’re going to present them,” she said. “Families will have different values around certain topics and the school system is basically bulldozing right over those and deciding that they’re going to teach kids the things when they want, how they want.”

Sanzi said the district should focus on boosting academic performance in reading and mathematics.

For the 2021–2022 school year, the percent of LAUSD students meeting or exceeding state standards in English dropped by about two percentage points compared to the pre-pandemic 2018–19 year—falling from 43.9 percent to 41.7 percent. In math, the drop was steeper, falling by five percentage points from 33.5 percent to 28.5 percent, according to the district’s data released on Sept. 9.

Only half of kindergarteners and over 60 percent of first and second graders in the district met the early literacy benchmarks for the 2020–21 school year—according to the LAUSD’s Open Data Portal—the same year when the “queer and trans-affirming” calendar was first introduced.

This comes as the state’s largest school district—with more than 115 schools and campuses—faces a looming enrollment crisis. In the 2021–2022 school year, the district has about 437,000 students.