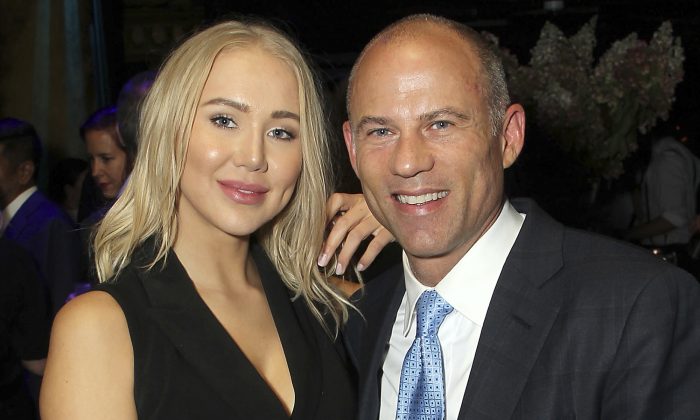 Attorney Michael Avenatti poses with Mareli Miniutti for a photo at a party in New York in September 2018. (Marion Curtis/StarPix via AP)
Crime and Incidents

The Los Angeles County District Attorney’s Office did not offer a reason for the decision, which was announced in a brief written statement.

Avenatti, who thrust himself into the public eye as the outspoken attorney for Daniels in her legal battles against U.S. President Donald Trump, was arrested in Los Angeles last week on suspicion of domestic violence.

Actress Mareli Miniutti who says she had a relationship with Michael Avenatti alleges that he dragged her across the floor of his Los Angeles apartment after an argument over money, according to court documents obtained Tuesday by The Associated Press.

Miniutti wrote in a sworn statement that during the argument, Avenatti shouted expletives at her and told her she was “ungrateful” before he hit her in the face with pillows. She said Avenatti attempted to pull her out of a bed in his guest bedroom and snatched her phone away before she screamed for help.

Avenatti, who has hinted that he might run for president in 2020 as a Democrat, denied wrongdoing to reporters waiting for him outside the police station where he was released and in a statement issued through his law firm.

The Los Angeles City Attorney’s Office typically handles criminal prosecutions that do not rise to the level of a felony. A spokesman for that office could not be reached for comment on Nov. 21.

That lawsuit was dismissed by a federal judge last month. Daniels has filed a separate lawsuit over a $130,000 hush-money agreement stemming from the alleged encounter.

Avenatti’s clients have also included Julie Swetnick, who accused Brett Kavanaugh of aggressive sexual behavior before his confirmation to the U.S. Supreme Court.