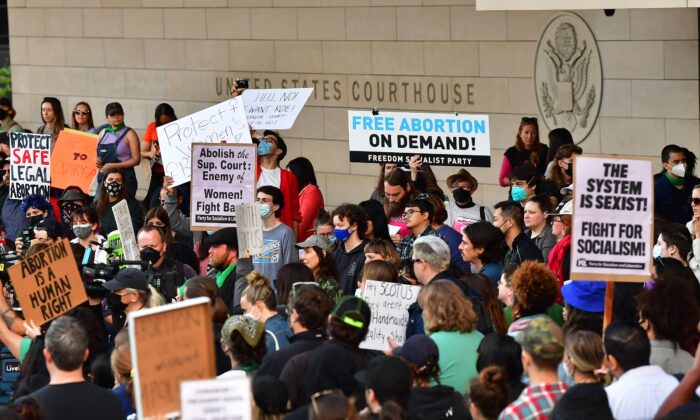 Activists gather outside the U.S. Courthouse to demonstrate in support of abortion, in downtown Los Angeles on May 3, 2022. (Frederic J. Brown/AFP via Getty Images)
Southern California

LOS ANGELES—The Los Angeles County Board of Supervisors this week moved to urge state leaders to “enshrine the fundamental rights of privacy essential to personal liberty” in the state Constitution in terms of access to abortion and contraceptives.

After a leaked draft of a U.S. Supreme Court opinion earlier this month that could potentially overturn the landmark 1973 decision in Roe v. Wade, county officials are sounding the alarm with the governor and lawmakers.

If Roe v. Wade is overturned, it would return lawmaking decisions on abortion access to each individual state.

“By explicitly enumerating and guaranteeing each of these individual privacy rights in the state Constitution via the amendment process, the Legislature can ensure they remain protected beyond the power of judges or lawmakers to abrogate any one of them,” the motion reads.

“The Supreme Court is on a path to take away a woman’s right to privacy. Make no mistake about it. This is an assault on all of us,” Supervisor Hilda Solis, one of the co-authors of the motion, said during the May 17 board meeting. “These rights are all intertwined and hinged on the right to privacy.”

Supervisor Sheila Kuehl, who also co-authored the motion, said that local Planned Parenthood clinics “are really upping its work in this county and in the state, including providing transportation and overnight or longer stays for women coming to the county.”

“But make no mistake. This is also about women in our county, women who live here and their families and the men who support them,” Kuehl said.

California state lawmakers previously passed a law ensuring “a woman’s right to choose or obtain an abortion prior to viability of the fetus, or when the abortion is necessary to protect the life or health of the woman” in 2002.

At least 15 other states and the District of Columbia have also written explicit protection for abortion into their state codes, including Colorado, Oregon, Washington, and others.

Meanwhile, several state pro-life organizations have been vocal against California’s strategy of focusing on abortion access while denying much-needed funding to childbirth services and expecting mothers.

“There is no greater power than the power of the purse. We should never make a woman choose between paying rent and having a baby. Let’s fund childbirth and education and child care and adoption services so that low-income minorities have the same option as women of privilege and wealth to have their babies and afford them,” said Susan Darnell, vice president of legal affairs of the Right to Life League, a nonprofit advocacy group connecting pregnant women to pro-life resources during a senate committee hearing on May 9.