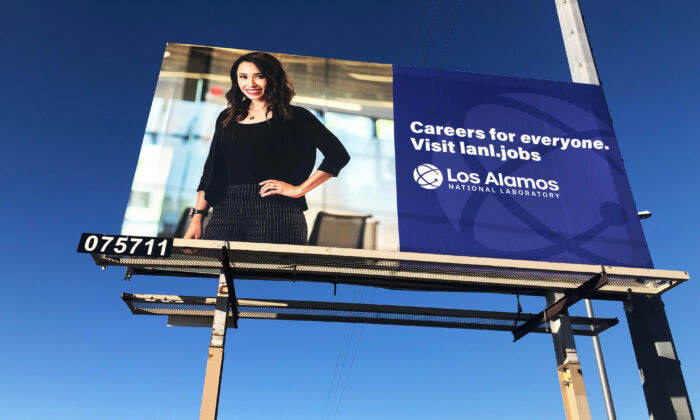 The New Mexico research lab that over seven decades ago created the atomic bomb listed 580 job openings on its website after nearly 200 employees separated from the company due to its CCP virus vaccine mandate.

“Careers for everyone,” reads a highway billboard in Los Alamos, New Mexico.

The Los Alamos National Laboratory (LANL) had 580 job openings on its jobs board on Oct. 28. Many of the jobs are skilled, technical, or scientific positions, including “proton radiology postdoctoral research associate” and “causal analyst tech project manager,” among others.

“I wish I had an actual figure for what was normal but, generally, when I would look at listings, it was only in the engineering and science disciplines,” said Anthony Sterling Butters, a former systems engineer at LANL who lost his job over the facility’s COVID-19 vaccine mandate.

Butters said he was denied a medical exemption, even though his condition puts him at high risk of inflammatory response after taking a vaccine.

Regarding the large number of job postings, “My speculation, however, would be that that number is definitely not normal,” Butters told The Epoch Times.

LANL announced the vaccine mandate in late August. It went into effect on Oct. 15.

Last week, the nuclear research-and-development facility had separated from 185 employees who declined to take the vaccine, while another 153 are on indefinite leave without pay.

The facility currently employs around 14,000 people—many of whom worked remotely during the pandemic.

Stephen Crampton, senior counsel at the Thomas More Society in Chicago, said he thought the job openings “most definitely” include those of terminated employees. His firm is representing eight LANL employees who filed legal action regarding religious exemptions over the vaccine mandate.

“They [LANL] told us in their response they’re shifting people around,” Crampton told The Epoch Times. “They’ve got to fill those slots. Hundreds of those [vacancies] are our people.

“These are really trusted people … front-line people with regard to defending the nation.”

On Sept. 27, Butters and a number of employees filed a complaint in the New Mexico district court alleging LANL had violated their right to refuse the vaccine.

A motion for a preliminary injunction to block the mandate was filed two days later. It was denied by a state district court judge on Oct. 5.

“I just feel he passed the buck. In my view, he didn’t make a decision based on our particular case, but on using other cases to decide,” said Jonathan Diener, an attorney representing the employees in the case.

On Oct. 18, the plaintiffs voluntarily dismissed their complaint “without prejudice,” meaning they can refile in another court at a later date.

Butters said that in August 2018, he was diagnosed with neuromyelitis optica spectrum disorder, a rare inflammatory disease of the central nervous system that can worsen after taking a vaccine.

On Sept. 7, he requested a medical exemption, which LANL denied “in spite of a number of referenced studies suggesting the risk of relapse associated with immunizations.”

As a systems engineer, Butters questioned the science behind the safety and effectiveness of the COVID-19 vaccines.

“In short, I think there has been a gross manipulation of founded scientific methodologies—even violative of principles dating all the way back to junior high curriculums,” he said.

“I also find it ironic that when the science is followed, you are led away from the narrative.

“Yet once you follow the science, as you were told, you are labeled as a ‘conspiracy theorist’ … such that all questions you posed, or will pose, whose answers might suggest [or] reveal something contrary to the mainstream narrative, are immediately suppressed or censored. This is opposite of science.”

“Any position requiring clearance means anywhere between six and 18 months before the hire can become productive in the capacity for which they were hired. This is arguably the most important element and does not consider training, experience, and other qualification deficits.”

“Will timelines match up with the obligations of the laboratory? I hope for the sake of the laboratory, and our national security mission in general, that they are prepared to realize worst-case scenarios,” Butters said.

A LANL scientist with a doctorate in chemistry, who spoke on condition of anonymity, said being fired has been personally devastating.

“My family and I are being forced to leave our friends, our home, and our family. We cannot afford to live here without a paycheck. We had really put down roots here, intending to stay forever, and it is very trying to suddenly be forced out.”

The former employee said it will take many years for LANL to recover from the loss of so many skilled employees.

“The lab is already facing a crisis as the older generation, who actually performed real underground tests, retires. This loss of talent and experience is very poorly timed and will, at best, set back our nation by many years.”

Another terminated employee who refused the vaccine worked in program management and had sought a religious exemption as a Buddhist.

“I believe in the sanctity of life,” the employee told The Epoch Times on condition of anonymity.

“Because I see my body as the physical manifestation of my soul, I have not had a flu vaccine in 10 years.”