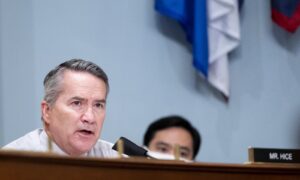 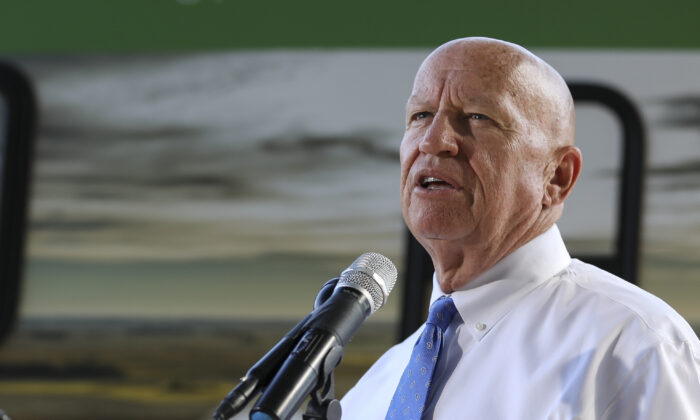 Rep. Kevin Brady (R-Texas) joins Members of Congress and farmers from across the country to rally for the United States-Mexico-Canada Agreement (USMCA) on the National Mall in Washington on Sept. 12, 2019. (Samira Bouaou/The Epoch Times)
2022 Election

“I am retiring as your congressman. This term, my 13th, will be the last,” Brady, the top Republican on the House Ways and Means Committee, told the Woodlands Area Chamber of Commerce in Houston.

“I set out to give my constituents the representation you deserve, the eﬀectiveness you want, and the economic freedom you need. I hope I delivered. It’s a remarkable privilege to work for you in the U.S. House of Representatives.”

Brady, 66, represents the state’s 8th Congressional District, which includes Houston and some nearby areas. He remains enormously popular, winning 72.5 percent of the vote in 2020.

He said people would be eager to assign a motive to his upcoming retirement, and assured listeners he hadn’t lost faith in Congress or the political system.

“I work with some of the most dedicated people in the nation—talented, hardworking, and serious about their responsibilities—in both parties,” he said. ”And after 25 years in the nation’s capital, I haven’t yet seen a problem we can’t solve or move past. Not one. Especially when we put our best ideas and intentions together.

“Given the times, I’m sure some will say ‘It’s Trump’s fault.’ Nonsense.”

Brady, the fourth House member who will be retiring after the current term, said he sees term limits on committee leaders as making sure “lawmakers who work hard and eﬀectively have the opportunity to lead, to bring fresh ideas to our committee work.”

Because of GOP limits, Brady could no longer continue as the ranking Republican on the tax-writing panel.

Brady championed the 2017 tax bill that he helped craft, and that former President Donald Trump signed into law, as well as the revamped U.S.–Mexico–Canada trade agreement and the ending of the Affordable Care Act’s individual mandate, which forced people to pay if they didn’t have health insurance.

“The tax cuts lifted millions of Americans out of poverty, and gave hope to so many the old tax code had left behind. America recaptured the title as the most competitive economy in the world, bringing manufacturing jobs and investment back home to America from overseas,” he said.

Brady says said he feels the portrayal of America by some in the media is not true.

“We remain the most charitable nation on the planet. We are a nation so valued that a million military men and women have sacriﬁced their lives for our freedoms and opportunity. And look at yourself, look around at your friends and our community: We come together every day voluntarily to feed the hungry, house the homeless, rescue our veterans, race to help our neighbors in a natural disaster … and more. We do this without a single thought about the color of our anyone’s skin, their religious beliefs, or the circumstances of their birth. We volunteer, we give from our pockets and our hearts, we care for each other,” he said.

“Because that is who America is. Are we a work in progress? Absolutely, and there’s plenty of work yet to be done. But that’s what makes America so special.”