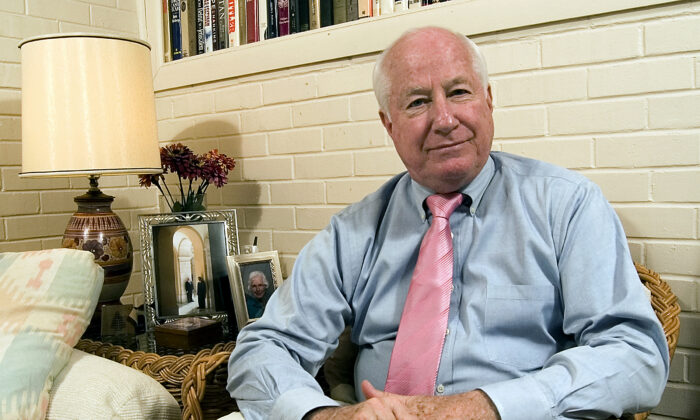 Former Arizona Rep. Jim Kolbe sits for a photo in the living room of his house in Tucson, Ariz., on Jan. 15, 2007. (John Miller/AP Photo)
By The Associated Press

PHOENIX—Jim Kolbe, a Republican congressman who represented a heavily Democratic region of Arizona for more than two decades, has died. He was 80.

Kolbe served in the Arizona Legislature before being elected in 1984 to Congress, where he often was at odds with other Republicans over his support for free trade and an immigrant guest worker program.

Kolbe retired from Congress when his 11th term ended in 2006.

Kolbe started his political career at 15 as a page for the late U.S Sen. Barry Goldwater in Washington and later served on the board that oversees the page program. He attended Northwestern University and then Stanford, earning a master’s degree in economics.

From 1965 to 1969, he served in the Navy. He was deployed to Vietnam, where he was awarded a congressional medal for valor.

After stints working in the Illinois governor’s office and in real estate, he entered Arizona politics. Kolbe was elected in 1976 to the state Senate and served until 1982. He was sworn in to the U.S. House of Representatives in 1985, the first Republican since Arizona statehood to represent a majority-Democratic district in the southern part of the state.

Kolbe was known in Congress for his advocacy for free trade, international development, immigration and Social Security reform. He also waged an unsuccessful campaign to eliminate the penny due to production costs.