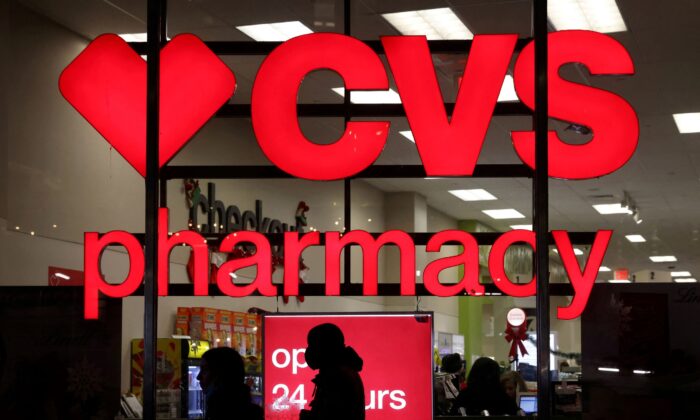 People walk by a CVS pharmacy store in Manhattan, New York, on Nov. 17, 2021. Some over-the-counter antihistamines have been shown to be effective against long COVID symptoms. (Andrew Kelly/Reuters)
By Naveen Athrappully

Two people experiencing the symptoms of COVID-19 long after the typical time frame of the disease have reported an almost full recovery after taking daily doses of over-the-counter antihistamines.

Antihistamines, drugs commonly used to treat allergies, influenza, and the common cold were taken by the individuals to treat “long COVID,” also known as post-acute sequelae SARS-CoV-2 infection (PASC), a condition that affects millions of people worldwide and has no established treatment protocol.

“PASC is an emerging global health crisis, with an estimated prevalence of 30 percent. PASC is often painful, debilitating, and impairs daily functioning. The [U.S.] Centers for Disease Control and Prevention (CDC) reports that two-thirds of patients hospitalized with SARS-CoV-2 develop PASC within 6 months after infection,” according to a study (pdf) published by ScienceDirect.

In June, Patient One ate cheese, which triggered an allergy. As a result, she took 50 milligrams (mg) of diphenhydramine Hcl, an over-the-counter oral histamine antagonist.

“The following morning, she noted considerable relief of fatigue and improved ability to concentrate. She did not take additional histamine antagonists for the next 72 hours, during which time she experienced a recurrence of the fatigue and cognitive symptoms,” the report reads.

Six months later, she began taking 25 mg of hydroxyzine pamoate, another antihistamine, on a daily basis. Patient One experienced partial symptom resolution. When the dosage was raised to 50 mg, she saw an almost complete resolution of symptoms, such as brain fog, fatigue, and chest pain.

She has remained on this regime for more than nine months, reporting significant decreases in bruises, rashes, and headaches. Patient One has now returned to work, does moderate exercise, and reports achieving roughly 90 percent of her pre-PASC functioning.

Patient Two, another white woman employed as a teacher, developed body aches and a cough 48 hours after being exposed to the virus. She experienced chills, inspiratory chest pain, joint pain, shortness of breath, insomnia, dysgeusia, abdominal pain, and bilateral acrocyanosis in her hands through the next few months. She began taking baby aspirin and saw a decrease in some symptoms after nine months.

“The following morning, she noted resolution of brain fog and fatigue,” the report reads. “She therefore continued the diphenhydramine daily, whereupon she noted marked improvement in brain fog, fatigue, and abdominal pain, and abatement of anosmia and dysgeusia.”

At the time that the report was published, the patient was still taking antihistamines and had reached 95 percent pre-COVID-19 function.

The paper was authored by two nursing scholars at the University of California–Irvine (UCI). Most patients who were approached by the two researchers told them that health care providers usually never recommended anything that helped them deal with their condition, Melissa Pinto, one of the authors of the study, told UCI.

“Currently, there is no cure for PASC, only symptom management. A number of options are being tried, with antihistamines being one of them. The possibility that an easy-to-access, over-the-counter medication could ease some of the PASC symptoms should offer hope to the estimated 54 million people worldwide who have been in distress for months or even years,” Pinto said.