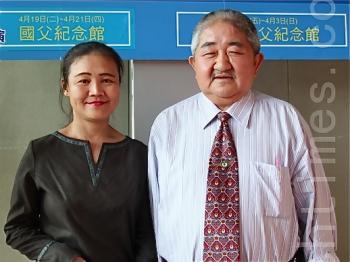 Among the audience were Mr. Chen Dongrong and Ms. Luo Yuezhen, a couple in charge of the LOHAS Humanities Center.

Of retirement age, the couple resonated with China's true divinely-bestowed heritage portrayed by the New York-based company in classical Chinese dance and music.

The couple were pleasantly surprised to find the Shen Yun performance not only a feast of beauty for the eyes, but also for the mind, same as the Shen Yun show they experienced earlier in Hsinchu.

Remarking on her second time seeing Shen Yun, Ms. Luo said, “Every attendance at a performance brings me something refreshing, feeling as if there is a different appeal each time.”

Mr. Chen was impressed with the dancers who displayed with ease, the mastery of classical Chinese dance. He felt their devotion to dance. “That is never so easy!”

His wife ageed, “It takes ten years of effort and practice to achieve that [standard]. It’s never something easy! Very devoted!”

She said the dancers were full of vitality, "as if their whole soul is devoted to their movements, particularly, the dance Ladies Of The Tang Palace. Wow! That’s really … very moving. I sense their devotion, effort and time, very remarkable.”

“A very clear, distinctive theme, the whole dance is presented wonderfully, with great excellence, for instance the dance The Opening Of Heaven’s Gates. Also the dances depicting the persecution of Falun Gong left us with very deep impressions—a sincere feeling.”

Ms. Luo praised the Shen Yun Orchestra for bringing together instruments from the ancient East and modern West, a masterful fusion and one of the unique trademarks of Shen Yun.

“Very gentle, capable of calming our minds. I enjoy music played by the pipa, very soothing, and relaxing … ."

She felt as if "being carried into the realms of their dances, seemingly I had been transported there. I felt as if I had already entered the heavenly realms.”

Mr. Chen said, “It’s well worth our coming from Hsinchu for the performance. Particularly, prior to our retirement, such an excellent feast greatly benefits our minds. We have been pursuing spiritual inspiration, and Shen Yun deeply impressed us. Very remarkable to reach such an achievement!”

“We should recommend Shen Yun to our offspring," a statement that gleaned his wife’s approval. “Shen Yun helps guide people toward good, toward a better direction,” Ms. Luo said.

In concluding, she said, “Very enjoyable, able to give me brain food. The Shen Yun performance is both educational and entertaining!”