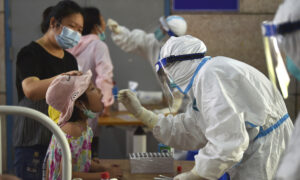 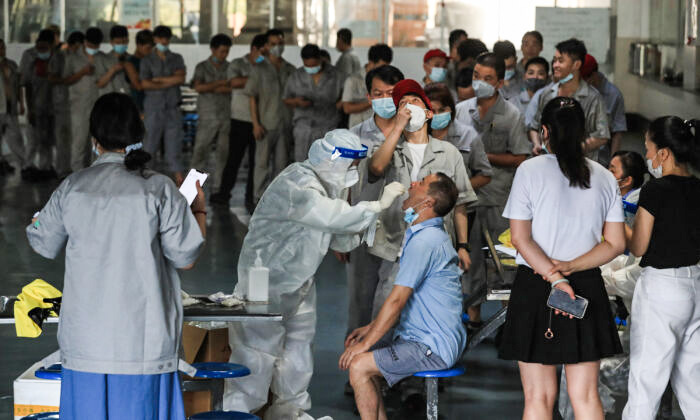 A worker receives a COVID-19 test at the dining hall of a car parts factory in Wuhan, Hubei Province, on Aug. 4, 2021. (STR/AFP via Getty Images)
INSIDE CHINA

People in many Chinese cities, under heavy lockdown due to COVID-19 outbreaks, are concerned that infection numbers are being underreported.

Mi Feng, a spokesperson for the Chinese National Health Commission, said at an Aug. 13 press conference, “As of now, the diagnosed local [COVID-19] cases have risen for 19 consecutive days, and involved 16 provinces.”

On Aug. 14 and Aug. 15, the regime announced more infections, but many people interviewed by the Chinese-language Epoch Times said they didn’t believe the numbers because of the regime’s past underreporting on COVID-19.

The regime has reported relatively small-scale local outbreaks this year until July 20, when Nanjing in eastern Jiangsu Province announced that airport workers were diagnosed with COVID-19. Since then, the CCP (Chinese Communist Party) virus, known as novel coronavirus, has spread to dozens of cities across the country.

In its counting of COVID-19 cases, the Chinese regime doesn’t include infected people not showing obvious symptoms. The regime also claims that anyone found to have COVID-19 who traveled overseas in the past month must have contracted the CCP virus when they were out of China, and count them as imported cases.

In Zhengyang County in central Henan Province, the regime only announced one person diagnosed with COVID-19 in recent weeks but has locked down residential compounds and villages.

The regime even planned to test all residents in the county again on Aug. 13, although it didn’t report any infections in the first round of tests carried out two days earlier.

Around midday local time on Aug. 16, the Zhengyang County government announced that it had only found one case that tested positive on Aug. 9. However, the county has strictly controlled people’s movements.

On Aug. 14, local residents in the county said lockdown measures meant they couldn’t leave home, and many believed the real infection figure must be higher than authorities were admitting.

“All of us have been fully vaccinated [with two doses],” Wang, a staff member of Zhengyang train station, said on Aug. 14.

“All of us have been tested for COVID this week. And all of us have to take the second test tomorrow or the day after tomorrow,” Wang said. “The outbreak is very severe here.”

Wang said he didn’t know the true scale of the outbreak, but he didn’t believe the government’s announcements.

A Zhengyang farmer told the Chinese-language Epoch Times on Aug. 14 that even farmers aren’t allowed to leave their homes or work their fields.

“If there’s only one infection, the regime shouldn’t be so nervous, and shouldn’t ask us to test at night. They said we will be tested again,” the farmer said.

In Yucheng County—some 200 miles northeast of Zhengyang—local authorities were criticized by state-run Beijing Daily on Aug. 14 because the county announced four diagnosed cases in a news release. The state-run media questioned the county government why it only announced four diagnosed cases when the total infections should have been five, while the provincial government reported two.

Following the report, the Shangqiu city government increased its lockdown measures by closing all highways and clinics and launching a third round of large-scale COVID-19 testing of all residents.

One Yucheng resident named Zhao told the Chinese-language Epoch Times that officials had given them little information.

“From Friday, all stores and shops were closed in Yucheng County and Shangqiu City. It’s very scary,” Zhao said on Aug. 14. “Even hospitals [in Yucheng] stopped receiving any patients, and nobody is allowed to leave the county.”

Wen, a staff member at a Yucheng bus station, said by phone on Aug. 14 that the whole county had halted all public transportation on that day. Even hospitals were closed due to the outbreak and the lockdown policy.

“We have no idea about the true situation. [The officials] didn’t say when [the county] will be unlocked,” Wen said.