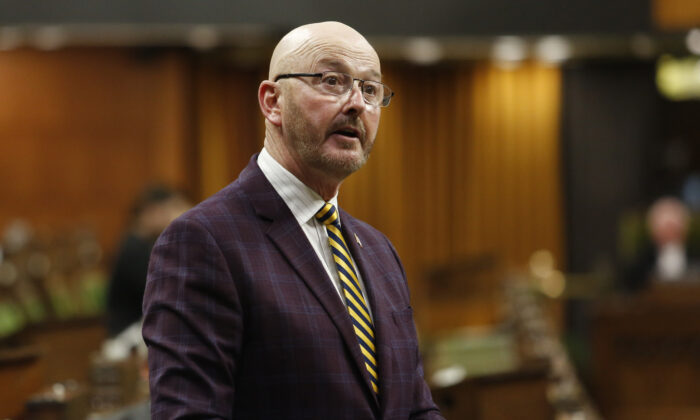 Conservative MP David Sweet delivers a farewell speech in the House of Commons in Ottawa on June 15, 2021. (The Canadian Press/ Patrick Doyle)
Canada

Canada’s COVID-19 lockdown measures are one of the key human rights issues facing the country, says departing Conservative MP David Sweet, who has been an outspoken rights advocate during the 15 years he’s been in office.

In his farewell speech in Parliament on June 15, Sweet said he decided not to run in the next election because he is struggling with what he called “mental health jaundice,” which he attributed to traumatizing experiences he has had in his life and to years of hearing the “worst stories of human suffering” while serving on the parliamentary human rights committee.

He also noted that “draconian lockdowns” aimed at curbing the spread of the virus have had a damaging effect on Canadians’ mental health, including possibly his own.

“There were other tools they could have used rather than broad, sweeping lockdowns,” Sweet said in an interview.

“I don’t speak with only my voice, I simply echo PhDs, doctors, health-care professionals, clinicians, and researchers,” he said, noting the Great Barrington Declaration signed by tens of thousands of scientists and medical practitioners from around the world stating that lockdowns do more harm than good.

“Unfortunately, the provincial governments and federal government did not listen to them, and preferred to use broad, sweeping lockdowns which caused profound mental health consequences for people … [and] caused delayed surgeries in the hundreds of thousands.”

Sweet said one of the missteps the federal government made at the beginning of the pandemic was to “shut down the operations that were inside of federal institutions to respond to a pandemic.”

“So we did not have the usual storehouse of PPE (personal protective equipment) etc., so we had to rely on defective PPE coming from the People’s Republic of China,” he said.

“One of the biggest, most troubling things about this pandemic is so much has been politicized and so many mistakes were made,” he said.

As for the origin of the outbreak, the claim that the novel coronavirus may have leaked from China’s Wuhan Institute of Virology has been gaining traction, as opposed to the theory that the virus originated from a wet market in Wuhan.

Sweet says a lack of co-operation from the Chinese Communist Party as well as pressure to stick with the current narrative and even accusations of racism are some of the challenges to discovering the true source of the outbreak.

“I don’t even know if we’ll get to the bottom of it because so many people have tried to pull the racism card when we try to investigate exactly what happened in Wuhan, and that’s problematic.”

Regarding international human rights work, Sweet had two suggestions for his colleagues on the House of Commons Subcommittee on International Human Rights. One is to seek good sources in their investigations of rights abuses so as to ensure that “oppressors cannot bring into question their evidence,” and the other is to refrain from politicizing human rights.

“There’s always partisan arguments, there’s always debate about policy … but seldom did we ever disagree in a partisan fashion because we understood that people’s lives were at stake,” he said of his colleagues on the committee.

In his farewell speech, Sweet urged MPs to constantly bear in mind their responsibility to protect Canada’s democratic institutions as elected officials.

“We are blessed to live in a country where voters determine the outcome of an election and not individual political parties with the right to establish lists for voters or a regime of evil elites who tell voters how they should vote. This is a rich gift that has been carefully protected by past generations. It has been fought for with Canadian blood in past conflicts,” he said.

Sweet also urged MPs to look after their mental health.

“All of us need to be conscious of what our limit is and ensure that we get relief and help when needed well before it becomes crippling,” he said. “This is what I am doing, and I encourage all those who can hear my voice and need help to seek it and be relentless to get what they need. They need not feel any shame. We all need help sometimes.”