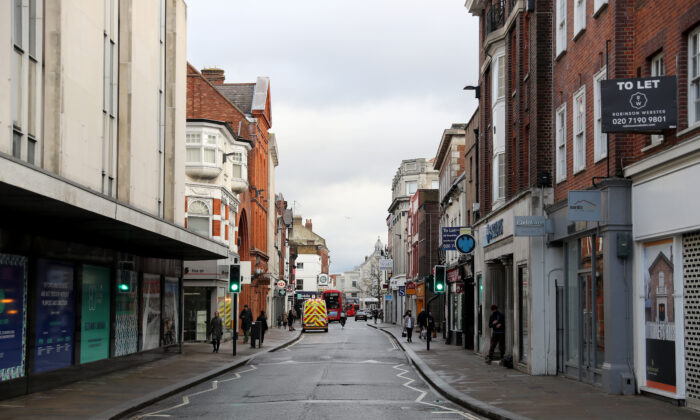 Lockdown ‘A Massive Failed Experiment and an Incredibly Expensive One’: UK Microbiologist

The lockdown in England should’ve been lifted weeks ago, a medical microbiology professor said on Wednesday.

David Livermore, a medical microbiology professor at the University of East Anglia and a member of the Health Advisory & Recovery Team, said the CCP (Chinese Communist Party) virus vaccination programme in the UK seems to have broken the link between infections and severe COVID-19, however, the lockdowns have been costly and haven’t been proven effective.

The comments come amidst speculations on whether the restrictions will be extended beyond June 21, the penciled-in date in the government’s roadmap to exiting the lockdown.

Ministers are due to make their final decision by Monday, and they’ve refused to rule out the possibility that the so-called “freedom day” will be delayed.

Lockdown ‘A Massive Failed Experiment and an Incredibly Expensive One’

He said that we should just accept the fact that COVID-19, like other respiratory diseases, is here to stay.

Apart from the cost of lockdowns, Livermore argued that the data suggest the method is hardly effective.

“I think that lockdowns are a massive failed experiment and an incredibly expensive one,” he said, citing comparisons between Sweden, which had much less restriction, and UK, Spain, and France; and between the U.S. State of Florida, which fully reopened in September last year, and California, which still has many restrictions in place. Livermore said deaths per million population are broadly similar between countries and cities that imposed strict lockdown and those that didn’t.

Asked about his thoughts on the CCP virus vaccines, Livermore lauded their quick development as an “astonishing achievement,” but said it would be “morally quite dubious” to vaccinate children.

“I think the pharmaceutical industry is to be congratulated for its successes in developing them so swiftly,” he told NTD.

Livermore said that according to current data, it’s a “no-brainer” for people over 50 to get vaccinated against COVID-19.

“Indeed, if you’re over about 50, I don’t think there’s any doubt that the risks from COVID are greater than any risk from the vaccine,” he said, adding that it should be a matter of “honour and decency” for healthcare workers to get vaccinated.

But for younger age groups, for whom the risk of COVID-19 is smaller, Livermore said they shouldn’t be pushed to take the vaccines.

Adults under 50 years old “might think it is altruistic to get vaccinated,” he said.

“That’s a very honourable point of view because you’re adding to herd immunity, you’re preventing [the] spread of infection in the community. On the other hand, you might wish to wait a little bit and watch, and I certainly would not condemn you for that,” he said.

When it comes to children, who have very little risk of suffering from severe COVID-19 and can’t make their own decision, “there’s little justification for asking children to face even that very, very small hazard when they have no direct benefit,” he said, adding that he’s “very cautious and sceptical about early vaccination of children.”

Official COVID-19 death figures in the UK have largely remained in the single digits in the past month. Although daily case numbers have been increasing exponentially in the last few days—attributed to the easing of restrictions and the emergence of a more infectious Indian (Delta) variant—most new cases are seen in younger age groups, and deaths and hospitalisation numbers remain low.

“The number one symptom is headache … followed by sore throat, runny nose, and fever. So all those are not the old classic symptoms [of COVID-19]. And number five is cough, it’s rarer. And we don’t even see [the] loss of smell coming into the top 10 anymore,” Spector said in his update video on Youtube, adding that it may have contributed to the growth rate because people may have thought they had a common cold and continued to socialise.