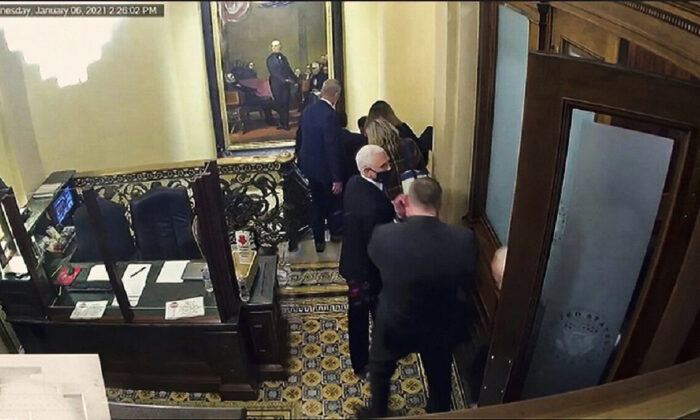 Pinpointing the whereabouts of Vice President Kamala Harris and former Vice President Mike Pence have become a key part of efforts by multiple Jan. 6 defendants in fighting against prosecution.

Harris was the vice president elect and Pence still the vice president when rioters entered the U.S. Capitol on Jan. 6, 2021. Many charges say both Harris and Pence were inside the building when a defendant went into the Capitol or was on Capitol grounds. But the government is now admitting Harris left before the clock struck noon, well before the Capitol was breached. And fresh questions are being raised about where Pence went when Congress split up to consider objections to electoral votes before the breach.

Prosecutors have leveled the charge of entering or remaining in a restricted building or grounds against over 200 defendants, asserting the charge was warranted because people “did unlawfully and knowingly enter and remain in a restricted building and founds … where the vice president and vice president-elect were temporarily visiting, without lawful authority to do so.”

Many defendants have pleaded guilty to the charge in exchange for others being dropped, with a subset being sentenced to time in prison.

In recent months, though, prosecutors have said they learned Harris was not actually inside. The reference to her has quietly disappeared in some superseding indictments, but not all.

When prosecutors left the reference in an indictment against defendant Nicholas Rodean, it drew a harsh response from the federal judge overseeing the matter. He asserted it “suggests a certain lack of attention and care in the prosecution of this case.”

On Feb. 17, for the first time, prosecutors went into more detail about the whereabouts of Harris on the fateful day.

A U.S. Secret Service (USSS) agent named Jason Jolly told the court in a sworn declaration that he was helping protect Harris and that she not only wasn’t at the Capitol when it was breached, but she left in the morning.

Harris was planning to return in the afternoon but “her travel to the Capitol was delayed when the Joint Session was interrupted by the riot,” Jolly wrote. The joint session was not in place when people entered the building, having broken up for each chamber to vote on objections to Arizona’s electoral votes.

Harris did not end up arriving back at the Capitol until approximately 7 p.m., according to Jolly.

Prosecutors included the declaration in a joint filing with lawyers for Guy Reffitt, who is scheduled to go on trial soon on multiple charges from Jan. 6.

Based on the declaration, the government moved to strike mention of Harris from the charge of entering or remaining in a restricted building or grounds. But even without Harris, “the indictment continues to state a viable offense that has been in the charging document since the date of its return by the grand jury,” they wrote. That’s because the reference to Pence would remain.

Pence, though, may not have been inside the Capitol when certain defendants entered, lawyers for another defendant said in a separate filing.

Couy Griffin, who has also pleaded not guilty to all charges against him and is due to go on trial in March, through his counsel recently asked the government whether it would make available to him a Secret Service agent with knowledge of Pence’s whereabouts on Jan. 6. Even if the government won’t call such a witness, the defense will require their testimony, Griffin’s lawyers said.

In lieu of an agent testifying, the government was asked if it would confirm Pence was not inside the Capitol after 2:28 p.m. on the day of the breach.

“The government would not agree to provide identification for a USSS witness with the relevant knowledge and would not agree” to confirm Pence wasn’t in the Capitol at that time, the filing stated.

After a block of redacted text, Griffin asked the court to order a subpoena to compel testimony from a witness.

The request came after prosecutors in the same case introduced a declaration from Sgt. Stephen James, a U.S. Capitol Police officer. James was not helping guard Pence but said he viewed surveillance footage from inside the Capitol and watched as Pence was ushered to “a secure location within the Capitol complex,” which includes both the Capitol building and the Capitol visitor center.

Pence arrived at the location at 2:28 p.m., about two minutes after leaving the Senate chamber, according to James. Pence left the secure location at about 6:29 p.m. to return to the chamber.

James said he spoke with colleagues who were with Pence who said the official, besides using a nearby restroom twice, stayed in the location the entire time.

Griffin’s lawyers said the declaration appears to bolster their case because Griffin didn’t enter the building until at least three minutes after Pence arrived at the secure location. They said the declaration contained ambiguities, including not listing every building or location that is considered part of the complex.

“To establish whether the government has proven its charge, the court must be permitted to hear testimony on whether the vice president was temporarily visiting the ‘restricted building or grounds’ when Griffin allegedly entered either,” they wrote.

Joseph McBride, an attorney representing some of the Jan. 6 defendants, told The Epoch Times that the “entering or remaining” charge was already dubious, and would collapse if neither Harris nor Pence were in the Capitol.

“If it turns out that Pence wasn’t even there that day, or was not there at the relevant time, then the whole thing truly falls apart,” McBride said. “Pay attention to it, because if it turns out that they lied about that, then it could be in fact the case that we have a whole bunch of people languishing in prison for over a year that should not have been there to begin with.”