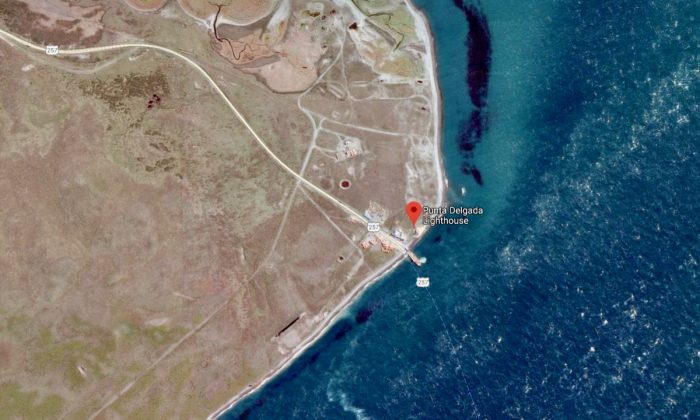 Punta Delgada, Chile, on the banks of the Strait of Magellan. (Screenshot via Google Maps)
Americas

After a dead blue whale washed up on the shores of Chile, surprised locals took selfies with it, wrote graffiti on it, and engaged in other questionable behaviors.

The whale washed up on the beach of Punta Delgada, in the south of Chile. La Nacion published a photo of five guys taking a selfie with the animal in the background, floating dead in the water. Another photo shows two girls sitting atop the carcass, smiling.

Photos posted on Twitter show “ANA TE AMO” etched into the whale’s tail with a rock. In English it means “Ana, I love you.” People also walked all over the animal, leaving footprints on its body.

“I was shocked to see that out of control situation,” said Gabriela Garrido, a researcher with the Natural History Museum of Río Seco, via La Nacion. “because how do you tell people not to touch it, to keep their distance. I had a lot of anger, and felt powerless.”

Garrido explained that whales have a fine outer layer of skin which is easily marked. He said that a whale’s skin gives scientists a view of its life history. That is why someone was easily able to carve into its tail with a rock.

“I think it’s a sign of ignorance and lack of respect for marine life, especially for an animal as emblematic as the blue whale,” said Patricio Díaz, regional director for the Magellan Strait of Chile’s National Fishing Service, via La Nacion.

La Nacion reported that the whale selfie photos posted to social media drew rejection from all who viewed them.

Anelio Aguayo, from the Chilean Antarctic Institute thinks the whale’s cause of death is starvation, since it doesn’t have any impact markings from collisions with sea vessels, according to La Nacion.

Aguayo told La Nacion the whale is a youth less than two years old and that there is “no doubt it is from the South Atlantic, it went through the eastern mouth of the strait and fell into its narrows. It was very thin, it must have been lost a long time, the thickness of its blubber was not more than six, eight centimeters, which indicates he had lost half his weight. He had a soup of green seaweed inside, and these animals feed on plankton.”

According to Newsweek blue whales are the largest known mammals, though because of their size it is difficult to get an exact measurement. The biggest one ever studied was 110 feet.

The Chilean navy has since erected a perimeter around the carcass, to keep people back.