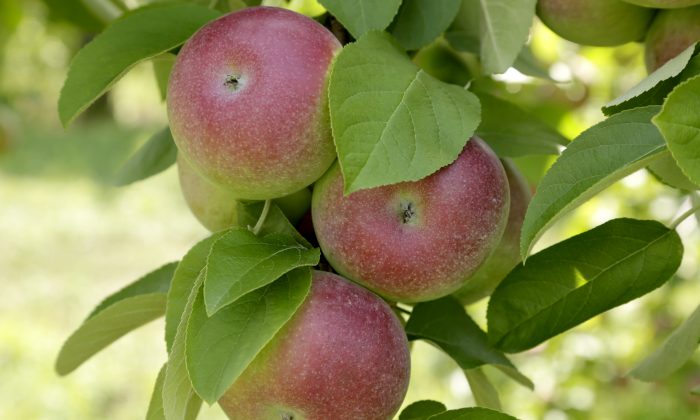 McIntosh apples hang on a tree, Sunday, Aug. 30, 2015 at Carlson Orchards, in Harvard, Mass. As summer winds down in New England, apple-picking season is gearing up with growers forecasting a bumper crop. According to the U.S. Apple Association, the six-state harvest is expected to be about 14 percent higher than last year. (AP Photo/Steven Senne)
New York

MIDDLETOWN—E.P. Fisher got a hint from the moon and made a poem. “Hints from the Moon (Monday)” is one in a series for each day of the week. “It was a challenge that I made myself.”

Three of his poems were published on Dec. 21 on The Society of Classical Poets website, a recognition that his poems were considered “exemplary” by the Society. The Epoch Times recently spoke with the poet about his work and poetry more generally.

Poetry is one percent inspiration and 99 percent perspiration.

Formerly a resident of Pine Bush who now resides in Sullivan County, Fisher thinks a poem’s meaning comes from “the rhythm and the music.” He says meaning is at one end of a spectrum and music is on the other end. “In a really good poem you find a happy medium between those two.”

It’s required to have a definite structure, that is, a certain rhythm, to be eligible for the Society. Fisher prefers to write in dactyls, a poetic phrase or foot with one stressed syllable followed by two unstressed syllables.

He does use rhyming, but because it is not looked upon favorably by Americans today, Fisher mixes it up. “If you want to hold your audience, you have to build in some internal rhymes and do acrobatic things if you are into rhymes.”

But he says you don’t think about the form when you’re writing a poem. Poetic techniques are just “tools in the toolbox.” He uses those tools to keep it interesting. “If it’s too rigid, it gets to be oppressive and then the reader will just get turned off.”

He said, like Edison’s formula for invention, poetry is one percent inspiration and 99 percent perspiration. The poems published online were begun more than 30 years ago.

“You may get an inspiration that will give you a line or even a whole stanza. It exercises enough of a powerful grip on your imagination that you want to come back to it and elaborate on it and build on it and modify it.”

Once I plugged that word in, it was like you turned the switch on.
— E.P. Fisher

His poem “Touching Bottom” began that way. When his children were small, the family lived in a farmhouse surrounded by an old apple orchard. “I just heard an apple fall in the darkness in my office and the one little phrase with ‘autumn’ and ‘bottom’ got the poem going.” [read the poem below]

Sometimes he’s never satisfied so he will put it away and come back to it with fresh eyes. Then he sees the flaws and works it over again.

Fisher did not finish a poem because “the whole thing turned on just one word—I couldn’t get one word in it right.” Then one day a word came that was part of a rhyme. “Once I plugged that word in, it was like you turned the switch on.”

He takes a walk every day and senses poetic rhythms with every step. “Maybe there is a connection between poems being written in feet because there is a certain rhythm to feet and the connections between the earth and the rhythms of the body with poetry.” Today everyone gets around by driving and Fisher says “It lost that grounding, that connection of your foot to the earth.”

Fisher likes the poetry of Dylan Thomas. On Christmas eve he traditionally reads “A Child’s Christmas in Wales” to his daughters. Another poetic work of the Welsh poet, “Do not go gently into the good night,” is the most read poem at funerals. His personal Dylan Thomas favorite is “If I Were Tickled by the Rub of Love.”

Americans have taken a wrong turn in poetic expression.

He said Americans have taken a wrong turn in poetic expression. “Because we are free, we are a free society, and free verse is the only way that a good American poet can write.” This is unfortunate, he said, because we have cut ourselves off from the very best—Emily Dickinson and Robert Frost.

President of the Society of Classical Poets Evan Mantyk agreed. “Modern poetry is usually free verse, meaning you can write just about anything and call it poetry. You could even take one of your emails and say that’s poetry.”

Our society is a culture that favors prose. “Americans have decided that they are just going to write prose,” Fisher said. “They don’t even do that well.”

Fisher said that poetry “has always been at the bottom of the totem pole.” He hopes that will change so society can mine 500 years of wisdom that has been crystallized in great poetic expression.

Hints from the Moon

Beginning with zero, hints from the moon
Going through phases, ripe in the womb;
Time out of nothing, pared in the night,
Planet of sorrow tilting to light;
Retrograde motion, surf pushed & pulled,
Full moon to crescent, new moon to full…

Lifting & lowering tides in the dark,
Waxing & waning waves in the heart
Breaking & whispering, rhymed in a dream,
Mouth like a river, scenes from the sea;
Emptiness mints its circumference in space,
Coin of the realm, stamped with love’s face…

Mirror of madness, omen of blood,
Cycle of heroes, moods of the gods;
Ides interregnum, isle of dead kings,
Midwife to poetry, horses with wings;
Woman of mystery’s embryo curled,
Unconscious, cosmic egg of the world.

Just heard an apple
In the half dark
Go thump for autumn:
Plump the sound
Of ground and round fruit
Touching bottom

The falling planet
Tumbling down
Eavesdrops on Eden,
As insect legions
Drum the ear, and deer
Invade my garden.

Just heard the wind blow
Through the rain
And gain momentum;
One grief to go,
One leaf remains,
One frantic pattern.