Liz Cheney Will Campaign for Democrats, Leave Republican Party If Trump Is 2024 Nominee 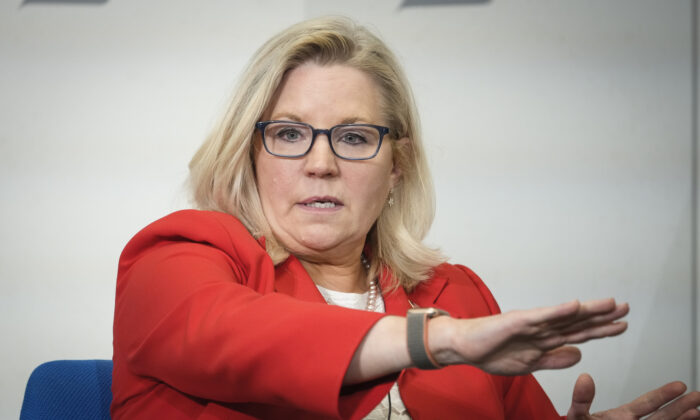 Rep. Liz Cheney (R-Wyo.) said on Saturday that she will not remain a Republican if former President Donald Trump is the GOP presidential nominee in the 2024 elections, and that she would also be willing to campaign for Democrats to stop GOP nominee Kari Lake from being elected in the Arizona gubernatorial race.

Cheney, who has been called a “Republican in name only” by others in her party and lost the Republican primary to Trump-backed challenger Harriet Hageman in August, made the comments at The Texas Tribune festival in Austin.

“I’m going to do everything I can to make sure Kari Lake is not elected,” Cheney said.

Former television anchor Lake, who is endorsed by Trump, won the Republican nomination in the Arizona primary election in August. Lake has been vocal in contending fraud in the 2020 election and has pledged to improve election security if she wins the gubernatorial race.

When asked by Texas Tribune CEO Evan Smith whether doing everything she can to ensure Lake is not elected included campaigning for Democrats, Cheney simply stated: “Yes.”

Cheney, who has become one of the most vocal voices in the Republican Party against former President Donald Trump, later added that she would not remain a Republican if he were to gain the party’s nomination in 2024.

Cheney also mentioned Virginia Gov. Glenn Youngkin, who has said he will campaign for Lake.

“He’s demonstrated that he’s somebody who has not bought into the toxin of Donald Trump—but he campaigned recently for Kari Lake, who’s an election denier, who is dangerous,” Cheney said.

“That’s the kind of thing we cannot see in our party; we cannot see an accommodation like that, and I think it’s very important that we be clear about that,” Cheney added.

Youngkin defended campaigning for Lake at the Texas Tribune Festival on Friday, noting that while he is “comfortable supporting Republican candidates,” they do not agree on everything.

“I have said that I firmly believe that Joe Biden was elected president,” Youngkin said.

Elsewhere on Saturday, Cheney acknowledged that there are a lot of “bad policies” in the Biden administration but added, “I think it’s really important though, as voters are going to vote, that they recognize and understand what the Republican Conference consists of in the House of Representatives today.”

Asked whether she herself would run for president in 2024, Cheney did not provide a decisive answer.

“It’s not about me or making a decision about what I’m going to do,” she said. “I certainly will do whatever it takes to make sure Donald Trump isn’t anywhere close to the Oval Office.”

Cheney announced in August that she’s considering running for president in 2024 but has not yet made a decision on the potential run.

“That’s a decision that I’m going to make in the coming months,” she said on Aug. 17 in an interview on NBC’s “Today” show, despite having just lost in the Republican primary for the seat she now holds.

Cheney was one of 10 House Republicans to vote to impeach Trump. She is also one of two Republican members sitting on the Democrat-led House panel investigating the Jan. 6, 2021, breach of the U.S. Capitol.

The House committee is set to return on Wednesday for its next public hearing.

Cheney on Saturday said that Democrats and the two Republicans on the panel would need to vote unanimously to move to criminally prosecute Trump, who has accused the panel’s hearings of being a distraction for Americans from the economic and social issues that are worsening under the Biden administration.