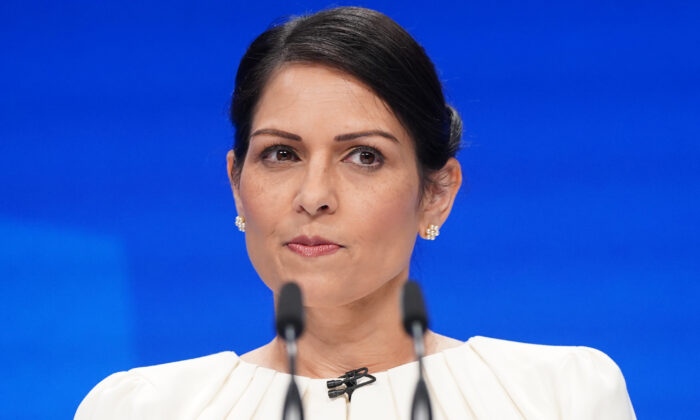 The terror suspect who died in the Remembrance Sunday bomb blast in Liverpool had been able to stay in the UK by exploiting the country’s “dysfunctional” immigration system, Home Secretary Priti Patel has said.

Emad Al Swealmeen, 32, died in the blast in a taxi outside Liverpool Women’s Hospital shortly before 11 a.m. on Remembrance Sunday. The incident has been declared a terrorist attack and the UK terror threat level has since been raised from substantial to severe, meaning an attack is “highly likely” rather than “likely.”

Assistant Chief Constable Russ Jackson said on Wednesday that Al Swealmeen, who was born in Iraq, had rented a property in Liverpool seven months ago and had started making “relevant purchases” for his homemade bomb “at least” since that time.

Al Swealmeen reportedly arrived in the UK in 2014 and had an application for asylum rejected the following year, but had remained in the country.

Patel, who is currently on a three-day visit to Washington, D.C., said the UK’s asylum system was a “complete merry-go-round” with a “whole industry” devoted to defending the rights of individuals intent on causing harm.

“The case in Liverpool was a complete reflection of how dysfunctional, how broken, the system has been in the past, and why I want to bring changes forward,” she told reporters on her flight to the U.S. capital.

“It’s a complete merry-go-round and it has been exploited. A whole sort of professional legal services industry has based itself on rights of appeal, going to the courts day-in day-out at the expense of the taxpayers through legal aid. That is effectively what we need to change.”

She added: “These people have come to our country and abused British values, abused the values of the fabric of our country and our society. And as a result of that, there’s a whole industry that thinks it’s right to defend these individuals that cause the most appalling crimes against British citizens, devastating their lives, blighting communities—and that is completely wrong.”

Al Swealmeen has been referred to as a “Christian convert” in some UK media reports, as he was baptised at Liverpool Cathedral in 2015 and confirmed in 2017.

Now concerns have been raised that some asylum seekers may have pretended to convert to Christianity in order to bolster their cases for refugee status.

A spokesman for Liverpool Cathedral said the church had “has developed robust processes for discerning whether someone might be expressing a genuine commitment to faith.”

“These include requirements for regular attendance alongside taking part in a recognised Christian basics course. We would expect someone to be closely connected with the community for at least two years before we would consider supporting an application,” said the spokesman.