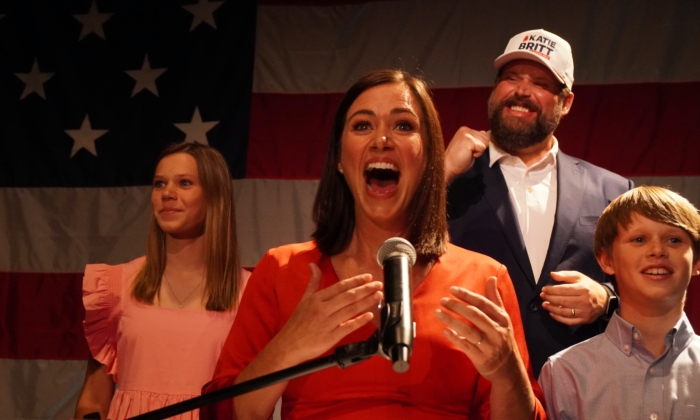 The latest on the June 21 primaries in Alabama, Georgia, Virginia, and Washington, D.C.

Gonsalves will face Rep. Lucy McBath (D-Ga.) in the general election on Nov. 8.

In the Republican primary on May 24, Corbin led a five-candidate field with 41.2 percent of the vote. Gonsalves finished second at 27.3 percent.

In the general election, West will oppose Rep. Sanford Bishop (D-Ga.), who received 93 percent of the vote in the May 24 primary and has held office since 1993,

In the May 24 Republican primary, Hunt tallied 37 percent of the ballots with West in second place at 30 percent.

Heading into the runoff, Hunt outspent West 6-to-1 and received $300,000 from the American Values First PAC following the May 24 primary. He was endorsed by Rep. Elise Stefanik (R–N.Y.).

Britt received a late endorsement from former President Donald Trump, who had months ago withdrew his endorsement of Brooks.

Brooks then missed an endorsement from primary candidate Mike Durant, who had finished in third place in the primary.

According to Alabama voters interviewed by The Epoch Times, Trump’s last-minute endorsement flips had little impact on their votes.

All 11 Virginia congressional incumbents—seven Democrats and four Republicans—will be defending their seats in November against a slate of challengers who earned their ballot berths in conventions or by defeating party rivals in the commonwealth’s June 21 primaries.

That roster includes Republican primary winners in two “tossup” congressional districts where incumbents are regarded among the most likely sitting Democrats to be unseated this fall.

In the other closely-watched GOP primary, Prince William Board Supervisor Yesli I. Vega and “outsider” Derrick Anderson were neck-and-neck in a six-candidate pack in a CD 7 race too close to call in the hours after voting ended.

Kiggans said she campaigned for 14 months and found voters of all political persuasions responsive to her conservative message. She said she will hammer Democrats on the economy.

With 32 percent of the ballots reported at 8:26 p.m. on June 21, McCormick received 71 percent of the vote followed by Evans at 28 percent, according to The Associated Press.

In the May 24 primary, Evans received 23 percent to McCormick’s 43 percent.

In a debate earlier this month, Evans said that Georgia should switch to closed primaries so Democrats cannot pull Republican ballots.

“What I’m now for is ensuring Republicans elect Republicans that will represent them, that Democrats don’t infiltrate, manipulate, influence our elections, which is what happened two Tuesdays ago,” Evans said.

If elected to be Georgia’s secretary of state, state Rep. Bee Nguyen has said she’ll create a government agency to address “rampant” disinformation “caused by Republicans.”

She may get that chance.

Now, Nguyen will take on incumbent Republican Secretary of State Brad Raffensperger in the general election on Nov. 8.

Not many secretary of state races gain the attention of the entire nation. Georgia’s race defied the trend because Georgia elections have been the topic of water-cooler conversations for nearly two years.

Some of the events of the 2020 election in Georgia fueled the controversy over the legitimacy of the outcome, culminating in the breach of the U.S. Capitol in Washington on Jan. 6, 2021, amid mostly peaceful protests.

That event happened the day after Georgia Republicans lost two U.S. Senate seats in runoff elections, turning control of Congress over to Democrats. Those results came on the heels of the hotly contested presidential election results that put Joe Biden in the White House.

Ever since, former President Donald Trump has questioned the veracity of Georgia’s election outcome, and has castigated Raffensperger for failing to show fraud.

Collins will face Tabitha Johnson-Green or Jessica Fore, the candidates in the Democratic primary runoff. Green and Fore remained in the race after a recount requested by third-place finisher Phyllis Hatcher did not change the results.

Georgia Voters Head to Polls for 4 US House Primary Runoffs

Considered one of the pivotal U.S. House races, the contest has been marked by attack ads from both sides, and opinions about who is the “Trumpiest” candidate.

The winner will face Tabitha Johnson-Green or Jessica Fore, the candidates in the Democratic primary runoff. Green and Fore remained in the race after a recount requested by third-place finisher Phyllis Hatcher did not change the results.

Since the 10th district is heavily Republican, Jones or Collins will likely occupy the seat in January 2023.

The pair face off in a Republican primary runoff election for Alabama’s U.S. Senate seat. The winner of the race between the two will likely win the general election in the deep-red state.

“I’m not a fan of Katie Britt,” said Montgomery voter Shirley Krothapalli. “I want someone who’s actually going to work.”

Krothapalli added that she planned to vote for Brooks.

Another voter, Cindy DeLongchamp, said she planned to vote for Britt because she knew her personally and knew she had a strong work ethic.

“She is a fellow parent at Montgomery Academy, and I’ve seen her work very, very hard during her campaign,” she said.

Although Britt received an endorsement from former president Donald Trump, DeLongchamp said the endorsement made no difference for her.

“No, I decided a long time ago to vote for Katie,” she said.

Britt’s last-minute Trump endorsement was the last in a long line of endorsement disappointments for Brooks.

Brooks started the race with a Trump endorsement, which Trump revoked after Brooks made a speech asking voters to focus on the next election instead of continuing to debate the 2020 election.

Then, Brooks missed an endorsement from primary candidate Mike Durant. If Durant’s voters had all swung to Brooks, it would have given him a significant advantage in the run-off.

But according to Alabama voters interviewed by The Epoch Times, Trump’s last-minute endorsement flips had little impact on their votes.

“It’s been a bunch of noise,” said Britt voter Mose Stuart. The whole issue with Donald Trump endorsement, I think he himself has rendered it a little bit meaningless.”

“I’m not even sure that it would have mattered in this election,” he said.

Voter Vanessa Askren said she was voting for Brooks because he impressed her in an interview on Glenn Beck’s show.

“He sounded very intelligent, very savvy on the economics of everything,” she said.

Several voters mentioned concerns over the rising cost of energy, the lack of border security, a bad economy, the ongoing Russian invasion of Ukraine, and the increasing power of China.

Askren said she believed the next few elections were very important.

“I think this election and 2024 are for the survival of this country,” she said. “Our liberty is going away, and I don’t think people realize it.”