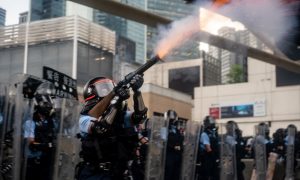 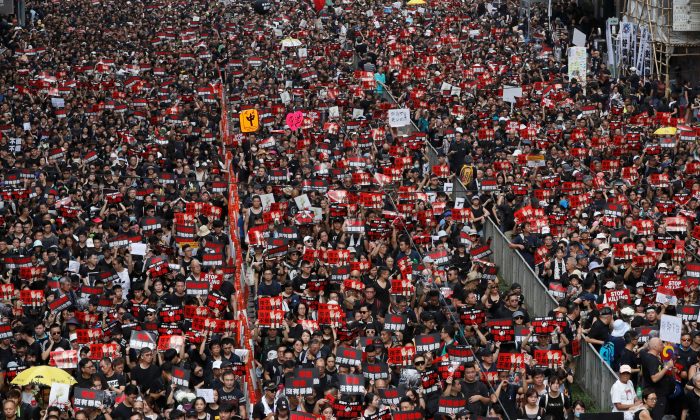 Organizers of the protest said that nearly 2 million Hong Kongers turned out for the protest on June 16.

The Civil Human Rights Front said the march has come to an end, and urged Hong Kongers to strike on June 17 if the government did not heed protesters’ demands to scrap the bill and for Hong Kong Leader Carrie Lam to step down.
_

Hong Kong Chief Executive Carrie Lam has apologized, saying she will accept criticism for the controversial extradition bill that has drawn another mass protest on June 16.

“The chief executive admits that large-scale confrontation and conflict took place in Hong Kong society due to the inadequacy of the government’s work, causing many residents to be disappointed and saddened,” the government said in a statement on June 16.

“The chief executive apologises to the public, and promises that [she] will accept criticism in the most sincere and humble way.”

The statement comes as hundreds of thousands of Hong Kongers took to the streets to demand the government to scrap the bill. On June 15, Lam announced the bill would be suspended indefinitely, but not withdrawn entirely. She did not then apologize for the government’s actions.

The government’s statement did not respond to protesters’ demands that Lam resign or the bill be withdrawn.

At nightfall, protesters filled the roads outside of the government headquarters and legislature.

At 6:30 p.m. local time, the Hong Kong bureau of the Epoch Times reported that protesters had filled the Hong Kong’s Legislative Council’s demonstration zone. Demonstrators also amassed in Tamar Park, which is next to the council.

At close to 7 p.m. local time, protesters took up all six lanes of Harcourt Road, which is where clashes broke out between demonstrators and local police on June 12, according to the Hong Kong bureau.

Some operators of the Hong Kong metro have been sharing encouraging words with protesters over the metro intercom system, reported RTHK, with some saying if they weren’t driving the protesters, they would be out joining them.

Similarly, some bus drivers have shared words of support over their bus’s intercom, asking protesters to be careful during the march.

At around 5 p.m. local time, the Hong Kong bureau of The Epoch Times reported that some protesters were on their way to areas near the Hong Kong’s Legislative Council (LegCo) building, including Tamar Park.

March To Continue On Into the Evening Due to Massive Turnout

At 5 p.m. local time, Hong Kong media RTHK reported that the last contingent of the march had still not left Victoria Park—the starting location for the “Withdraw Evil Extradition Bill” march—more than two hours after the march began.

Cardinal Joseph Zen, the former archbishop of Hong Kong, said “There is hope. There is hope,” when asked by the Hong Kong bureau of the Epoch Times about the large turnout.

Hong Kong media RTHK reported that the first contingent of the march has arrived at Tim Mei Avenue in Admiralty, the march’s destination, at around 4 p.m. local time.

The streets along the route of the rally are brimming with people chanting in unison “retract,” as they called for Hong Kong leader Carrie Lam to scrap the government’s extradition bill.

The slogans “Carrie Lam step down,” “No riot, only depotism,” and “We have not rioted. Release injured students” were also heard as hundreds of thousands of Hong Kongers peacefully marched side by side through their city streets.

Hong Kong media RTHK reported that local police have become more lenient this time, by allowing people to join the march from anywhere. Last Sunday, the police demanded that people should not cut in line.

According to an update from Civil Human Rights Front, the first contingent of the march arrived near the police station at Wan Chai around 3:30 p.m. local time.

It started 15 minutes earlier than the original schedule due to the large crowd size.

Singers Denise Ho and Anthony Wong Yiu Ming were among those spotted at the march which starts at Victoria Park.

Protesters, most of them dressed in black, are flooding into Victoria Park and the city’s metro stations ahead of the march that is set to begin at 3 p.m. local time.

Hong Kong media RTHK reported that crowd control is in place at local metro stations, and some of the metro trains might not stop at Tin Hau Station, which is about 6-minutes walking distance from Victoria Park.

Many protesters also stopped by Pacific Place Mall where earlier, a 35-year-old man wearing a yellow raincoat, dubbed “Raincoat boy,” fell off the scaffolding from which he had unfurled a banner calling for the complete withdrawal of the extradition bill and for Hong Kong Leader Carrie Lam to step down.

A symbolic image reminiscent of the days during the 2014 Umbrella Movement is making a reappearance in Hong Kong.

A long yellow banner with the words “Defend Hong Kong” in Chinese and “Fight for HK” in English was hung from Lion Rock in Kowloon, Hong Kong, on the morning on June 16.

Lion Rock, standing at 495 meters above Kowloon, has the shape of a crouching tiger. It is the most iconic peak in Hong Kong.

It is not known who is responsible for putting up the yellow banner, but it is to show support for the ongoing protests in Hong Kong against an extradition bill introduced by the legislature’s pro-Beijing leader Carrie Lam.

In 2014, protesters calling for universal suffrage for Hong Kongers camped out on the streets of the city’s main business district in Central for almost 3 months. At that time, yellow banners with the words “I want real universal suffrage” in Chinese were also hung from Lion Rock.

Hong Kong media reported that local firefighters were called to remove the yellow banner from Lion Rock at around noon on June 16.

Public broadcaster RTHK also reported that a smaller “Defend Hong Kong” banner had been hung from a hillside in Quarry Bay.

March in Hong Kong To Begin at 2:30 PM Local Time

Civil Human Rights Front (CHRF), the organizer of the June 9 march that drew 1.03 million people, is set to hold another march in protest against the Hong Kong government’s extradition bill on March 16, despite debate on the bill being “indefinitely” suspended.

Hong Kong leader Carrie Lam made the announcement to suspend the bill in a press conference on June 15. However, CHRF said on its Facebook page that its demand has long been for Lam to withdraw the bill—not just suspend it.

CHRF also condemned Lam’s failure to address police violence against protesters who had gathered around government buildings in Admiralty on June 12 during the press conference.

The government bill was scheduled to enter the pro-Beijing majority legislative council for debate on June 12, without wider consultations.

According to the CHRF’s Facebook page, the June 16 march will begin at 2:30 p.m. local time, starting from Victoria Park and ending at Tim Mei Avenue in Admiralty.

Jimmy Sham, a CHRF convenor, said it had received a “letter of no objection” from police regarding the March, according to Hong Kong public radio broadcaster RTHK.

However, Sham added that the police rejected CHRF’s proposals for two additional routes for the march. It is not known where these routes were planned to begin and end.

The march will be broadcasted live by the Hong Kong bureau of The Epoch Times and its sister media New Tang Dynasty Television (NTD).

Hong Kong Protester Dies After Unfurling Banner on Side of Building

A man has died after unfurling a banner protesting the proposed extradition laws from the side of a shopping mall, local media reports.

According to Hong Kong media Apple Daily, on the afternoon of June 14, a 35-year-old man wearing a yellow raincoat climbed up the scaffolding at Pacific Place mall and unfurled a banner calling for the complete withdrawal of the extradition bill and for Hong Kong Leader Carrie Lam to step down. Written on the back of his raincoat was “Carrie Lam Kills Hong Kong.”

Less than an hour earlier, Lam announced that she was suspended the bill indefinitely, but refused to completely withdraw the controversial legislation. Critics, however, have called for her to scrap the legislation entirely and resign.

The extradition bill, which would allow people in Hong Kong to be transferred to mainland China for trial, has sparked mass protests over the last week, with opponents saying the measure would further erode the city’s autonomy and jeopardize its status as a leading financial hub.

Meanwhile, lawmaker Roy Kwong and other protesters had gathered on the street below, out of concern that the man was going to jump, Hong Kong Free Press reported, with some singing “Sing Hallelujah To The Lord” and shouting “Go back inside, keep holding on.”

According to Apple Daily, the man refused to engage with police negotiators.

At around 9:00 p.m., the man suddenly climbed over the scaffolding and fell about 65 feet onto the sidewalk after firefighters failed to hold him, Apple Daily reported. He died after being rushed to hospital.

Flowers and mourning notes are left where a man in yellow raincoat fell to death after putting on #AntiExtraditionBill banners atop Pacific Place Mall in Admiralty on Sat nite. Reverend Chu Yiu-ming arrived after midnight to lay a flower. pic.twitter.com/LFvaqbNpuc

Mourners have since laid flowers and notes at the scene in remembrance of the man.