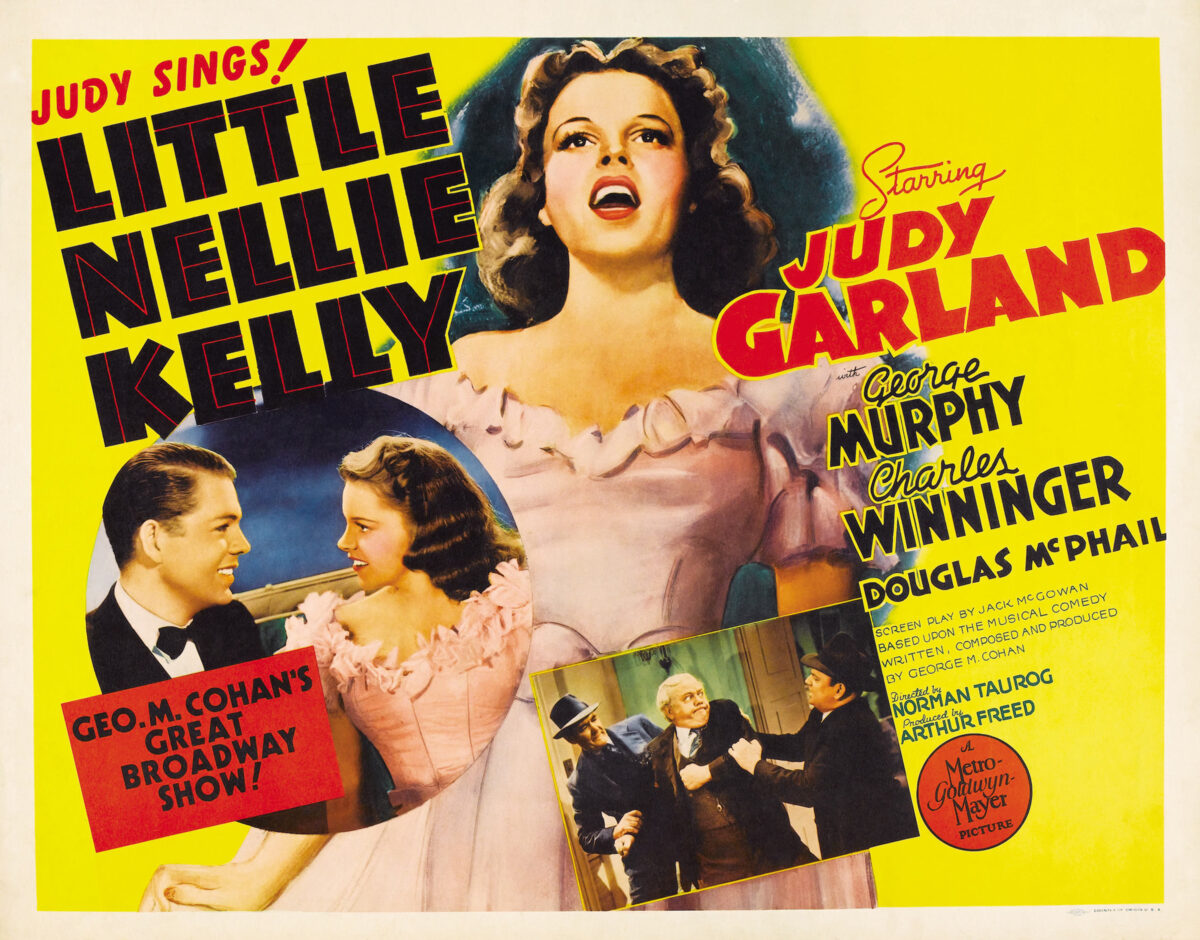 "Little Nellie Kelly" was not only a vehicle for Judy Garland but for the Irish. (Public Domain)
Film & TV

‘Little Nellie Kelly’: A Great Day for the Irish

St. Patrick’s Day, and the whole month of March by extension, is dedicated to celebrating all things Irish. However, many complain that American celebrations of “St. Paddy’s” Day are primarily cheap commercialism, ignoring Ireland’s traditional, genuine culture. Even “Plastic Paddy” celebrations, though, are few in 2021. After claiming St. Patrick’s Day as its first canceled event, the ongoing pandemic is dampening the popular March holiday for the second year. New York City’s famous St. Patrick’s Day parade was canceled in 2020, and the 260th year will be virtual on this 17th.

Whether you normally celebrate at home or in public, St. Patrick’s Day is about much more than drinking green beer. It’s an opportunity to appreciate the influence that Irish immigrants have had on America’s history, especially in the late 19th and early 20th centuries. You can celebrate by watching a movie from the era when Hibernians, the traditional Latin name for the Irish, reigned supreme in Hollywood: the 1930s–1950s. For this St. Patrick’s Day, we recommend MGM’s charming Irish-American musical from 1940, “Little Nellie Kelly.”

Stubborn Irishman Michael Noonan (Charles Winninger) dearly loves his young daughter, Nellie (Judy Garland), but hates working almost more. He is furious when she decides to marry local boy Jerry Kelly (George Murphy). When the couple emigrate to America soon after the wedding, he grudgingly accompanies them, still refusing to speak to his son-in-law.

In New York City, Jerry studies to become a policeman, but Mike refuses to seek employment. When the couple’s first baby is born, Nellie dies in labor. Jerry and Mike must raise little Nellie together, but the father-in-law remains hostile.

Years later, Nellie (again Judy Garland) is a grown-up girl, the image of her mother. She gains the admiration of young Dennis Fogarty (Douglas McPhail), the son of Mike’s friend Timothy (Arthur Shields). Although her father is delighted, her grandfather is just as disagreeable about her romance as he was about her mother’s. Little Nellie loves her father, her grandfather, and possibly Dennis, so she determines to bring them all together.

This movie is appropriate for St. Patrick’s Day from start to finish. The opening credits roll to standard Irish tunes with shamrocks and Celtic harps as background art. The first scenes take place in Ireland, and even after the story moves to New York, all the main characters are Irish and played by Irish actors, often with noticeable brogues.

Irish folk songs play a key part in this musical’s score. Nellie Noonan often sings “St. Patrick Was a Gentle Man,” a traditional folk song about Ireland’s patron saint, both before and after leaving the Emerald Isle. She also sings Roger Edens’s arrangement of the traditional “A Pretty Girl Milking Her Cow.” Later, her daughter sings a swing rendition of the song.

“Little Nellie Kelly” was originally a 1922 Broadway musical written by George M. Cohan. In typical Hollywood fashion, the movie adaption featured a significantly altered story and retained little of the original music. Only two songs from the original score, “Nellie Is a Darling” and “Nellie Kelly I Love You,” appear in this movie. “Singin’ in the Rain” was added as another solo for Garland.

The Irish celebration reaches its pinnacle with New York City’s famous St. Patrick’s Day parade. Capt. Jerry Kelly walks in the parade with other policemen, and Mike, Tim, and Dennis Fogarty also march. Little Nellie joins the festivities, much to her grandfather’s displeasure. While marching along, she sings the memorable “It’s a Great Day for the Irish,” which Roger Edens wrote for the film.

The Values of Erin

Irish themes and characters were common in Golden Age films. This is hardly accidental. Filmmakers intended this frequent representation of Emerald Isle descendants as tribute to one of Hollywood’s most powerful people. If you’re trying to remember whether Louis B. Mayer or Samuel Goldwyn was Irish, don’t bother.

The person to whom I am referring was neither a mogul nor any other studio employee. He was the head of the Production Code Administration (PCA), the Hollywood branch of the Motion Picture Producers and Distributors of America (MPPDA), later called the Motion Picture Association of America. This organization, independent of any studio, religion, or political affiliation, self-regulated American film content for decades. While Will Hays, MPPDA president during 1922–1945, is generally associated with this organization, Joseph I. Breen deserves the credit for film decency.

The PCA was called the Breen Office for the two decades when Irishman Joe Breen ran it (1934–1954). He ensured that all films complied with the Motion Picture Production Code, guidelines for inoffensive movie content. Although commonly called the Hays Code, publisher Martin J. Quigley and Father Daniel A. Lord, not politician Will Hays, penned the famous document.

Like a lovable Irish constable in an old movie, Joe Breen was a public servant with a club and a smile. He quickly befriended Hollywood folks, who realized he had their best interest at heart. They hoped to appeal to Irish-American Breen’s love of country by making Hibernian-themed movies. This may have charmed him, but it never made him lower PCA standards!

The uniquely strong but flexible moral values that Messrs. Quigley and Breen instilled in American films are comparable to the lyrics of Thomas Moore’s “We May Roam Through This World”:

“In England, the garden of beauty is kept
By a dragon of prudery placed within call;
But so oft this unamiable dragon has slept,
That the garden’s but carelessly watch’d after all.

“Oh! they want the wild sweet-briery fence
Which round the flowers of Erin dwells;
Which warns the touch, while winning the sense,
Nor charms us least when it most repels….

“In France, when the heart of a woman sets sail,
On the ocean of wedlock its fortune to try,
Love seldom goes far in a vessel so frail,
But just pilots her off, and then bids her good-bye.

“While the daughters of Erin keep the boy,
Ever smiling beside his faithful oar,
Through billows of woe, and beams of joy,
The same as he looked when he left the shore.”

England’s “dragon of prudery” is like a censor board, which artlessly butchered pre-Code films (1930–1934), ruining their stories without improving their moral content. France’s “vessel so frail” could be the modern Classification and Rating Administration, which merely categorizes finished films instead of guiding them throughout production. Only the Code, like Ireland’s “sweet-briery fence,” charmed while doing its job, since it made entertaining films that were appropriate for all ages.

If you love entertainment from Hollywood’s yesteryear, explore the vast world of old movies! They offer charm, music, heartwarming stories, wholesome romances, and genuine portrayals of family. “Little Nellie Kelly” is a beautiful example of all these attributes. It shows a young woman who is torn between her love for her father and her love for her husband. A generation later, her daughter faces the same dilemma with her grandfather, the same stubborn Irishman, in fact.

This movie teaches the value of American citizenship, work’s importance, and how love, no matter how sincere, can be misguided if it allows someone’s bad behavior to continue.

This St. Patrick’s Day, elevate your celebration by viewing this classic. Whether you’re Irish or not, this movie will leave you doing a jig while singing, “It’s a great, great day!”