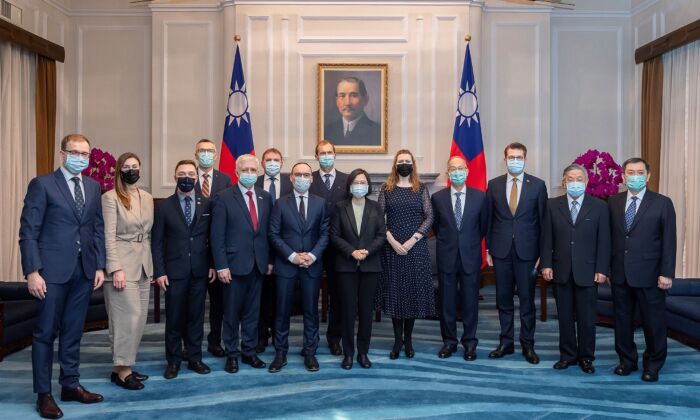 Lithuania’s stand over Taiwan “puts everything in a new light,” said its Parliamentarian Matas Maldeikis, as the European country faces retaliation from Beijing for drawing closer to the democratic island.

“We want to create economical bonds with liberal democracy as much as possible, because it’s a question of time … authoritarian regimes fall,” Maldeikis said in a Jan. 6 interview with NTD, a sister outlet of The Epoch Times.

“In helping [Taiwan], it is helping us also,” he pointed.

The congressman, also the chair of the Lithuanian Parliament’s Taiwan Friendship Group, started by thanking Taiwan and its people for backing the Baltic state in withstanding major economic pressure from China.

Taipei has announced a $200 million investment fund in Lithuanian industries including semiconductors, laser technology, and biotech, to boost bilateral trade, Eric Huang, head of the Taiwanese Representative Office in Lithuania, said on Jan. 5.

“We are very thankful for the possibility of the support that Taiwan expressed yesterday. It is a very big deal for us—for the government and for society,” Maldeikis said. “This kind of perspective puts everything in a new light. It’s two democracies working together and not being dependent, in any sense, on some foreign power.”

The country of 2.8 million people is now bearing a trade spat with China as it seeks to stand off the “very not stable” Chinese authoritarian regime, Maldeikis described.

“In a few days, everything could be ruined if you have a relationship with very not stable authoritarian regimes,” he said.

The Chinese Communist Party is threatening to “sweep Lithuania into the trashcan of history”, which is ironic, because that’s where communism already is.#StandWithTaiwan 🇱🇹💕🇹🇼🍍

The Baltic state, unlike most of its Western allies, has decided to stand fast to a direct relationship with Taiwan, by allowing the self-ruled island to open a de facto embassy in its capital, Vilnius late last year.

Such a move infuriated Beijing, which claims the island as its runaway province with no right to diplomatic recognition. China downgraded its diplomatic ties and suspended consular services after the Taiwanese Representative Office opened on Nov. 18.

Lithuania’s president recently said the decision to allow Taiwan to open a representative office using the island’s name was a mistake and flared controversy. But Maldeikis confirmed via a Jan. 7 Twitter post that the government will not change the name.

In addition to downgraded diplomatic ties, the gesture over the Taiwan row brought about an escalated financial dispute. Public reports show Beijing has pressured countries to halt the sourcing of materials from Lithuania and imposed a trade embargo over its exports and imports.

Maldeikis said the attack has rippled across the European Union (EU).

European Union’s trade commissioner, Valdis Dombrovskis, told a German newspaper last month that China’s customs were increasingly blocking exports from EU member states, prior to the holiday seasons, if they contain parts made in Lithuania.

“It’s a question of that [the goods are] made in European Union by the law and China is breaking all its commitments to the European Union,” said Maldeikis. “This is why we have to understand and China knows that. This is why it is lying. It is lying that nothing is happening.”

“In the sense, they are cowards,” he added. “It was not a coincidence, for China started the economical war with us exactly before Christmas … hoping to make a big fuss in our newspapers.”

During the Thursday talk, the Lithuanian parliamentarian urged democracies to back up each other as much as possible, because an “authoritarian regime—because he loves somebody or he doesn’t love somebody—just decides to cut the businesses to manipulate the businesses for his purposes.”

As a member of the European Union and NATO, the best Lithuania can do is to show success with Taiwan amid the tension with Beijing, Maldeikis said on Jan. 6.

“If it is a success story, it also sends a signal to other countries, a very strong signal, being not dependent on China,” he added.

The remarks came after the trade representative of America promised a day earlier “continuing strong support” to Lithuania, while top U.S. and German diplomats expressed concerns, agreeing that Chinese pressure against Lithuania was unwarranted.

The EU would take up the issue at the World Trade Organization if necessary, Dombrovskis from Latvia said previously.

Chinese Foreign Ministry spokesman Wang Wenbin called during a daily briefing on Jan. 6 the U.S. promise to Lithuania is to “use Taiwan to contain China.”

“It hurts China very much because it sees Lithuania and Taiwan can find partners somewhere else,” Maldeikis said.

Taipei said it was ready to help Vilnius out in resupplying trade that was halted by Beijing.

On Jan. 5, a Taiwanese state company promised to buy all the 120 shipping containers from Lithuanian that China rejected, and will take “as much as possible” more, said Taiwanese authorities.