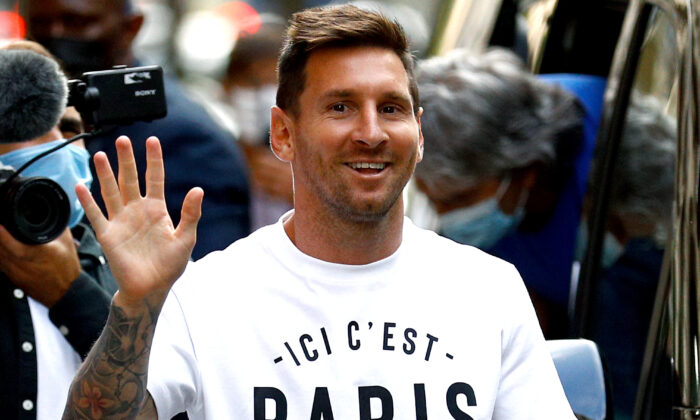 Football star Lionel Messi and three of his Paris Saint-Germain teammates have tested positive for COVID-19, the team announced on Sunday.

Juan Bernat, Sergio Rico, and Nathan Bitumazala have also contracted the virus and are in quarantine.

“They are currently in isolation and are subject to the appropriate health protocol,” the club said in a statement.

Paris Saint-Germain is scheduled to play Vannes in the French Cup’s round of 32 on Jan. 3. Six days later on Jan. 9, the team is set to go head to head with Lyon at the Groupama Stadium stadium, Lyon city, France.

However, it is unclear if Messi will be able to recover and leave quarantine in time for the match.

“Messi has been in regular contact with our medical team, and when he has a negative test, he will travel to France, but we don’t know any more than that. I don’t know if he will be involved against Lyon,” Pochettino told a press conference on Sunday.

“Until he gets a negative test in Argentina, he will not be able to travel to France. So it is all down to the test in terms of when he can travel … we will assess when he is ready to play.”

On Sunday, French Health Minister Olivier Véran announced that the isolation period for fully vaccinated people who test positive for the CCP (Chinese Communist Party) virus, which causes the disease COVID-19, would be cut to seven days from 10 days, starting from Monday.

“This isolation could be lifted after five days in case of a negative test. Those who are not vaccinated will have to self-isolate for 10 days, with a possibility to come out of isolation after seven days under the same terms,” Veran said in an interview with Le Journal du Dimanche.

France reported 219,126 new COVID-19 cases in a 24-hour period on Saturday, marking the fourth day in a row that the country has seen more than 200,000 cases and the second-highest figure to date after France registered 232,200 on Friday.

“We have been living with the virus for almost two years, everyone knows what to do in order not to be infected. But we can still catch it, there are things we cannot control,” Pochettino said. “This is the risk with which we live on a global scale.”

“In football, contact is inevitable, we share the dressing room. The risk of contamination is there, but we take all the necessary measures to try to prevent a player from infecting others,” he said.

Sunday’s statement from Paris Saint-Germain also noted that team member Neymar da Silva Santos Júnior will continue injury treatment in his home country of Brazil until Jan. 9 with members of the club’s medical and performance staff.

The Brazilian native was expected to be off the football field for six to eight weeks after suffering a sprained left ankle with ligament damage back in November.

His return to training is still expected to be in about three weeks, the club said.