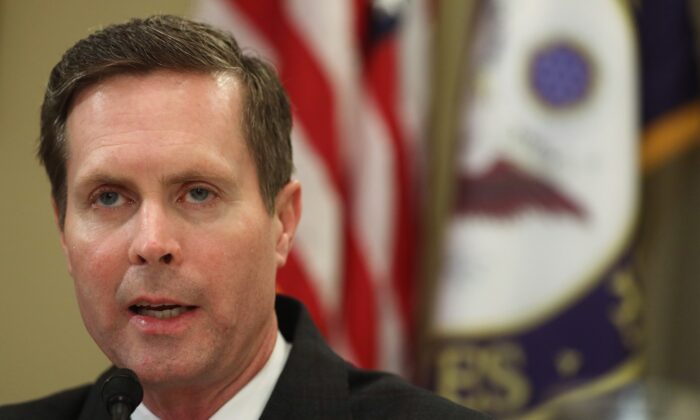 Rep. Rodney Davis (R-Ill.), who is likely to become chairman of the House Administration Committee in 2023 if Republicans regain the majority in the chamber in November, demanded in a letter on June 9 to Rep. Bennie Thompson (D-Miss.), the chairman of the House Select Committee to Investigate the January 6th breach of the U.S. Capitol, that the panel preserve all its records.

The letter from Davis, the current ranking GOP member of the Administration Committee, came just hours before the Jan. 6 panel’s first primetime hearing. An unnamed aide reportedly told journalists earlier in the day that evidence would be presented showing that then-President Donald Trump was “at the center” of an effort to prevent the transfer of power from him to incoming President Joe Biden.

In an unusually detailed and lengthy preservation demand, Davis told Thompson: “I write today to demand your cooperation in preserving all records produced by or in the possession of the Select Committee to Investigate the January 6th Attack on the United States Capitol (Select Committee).

“Please preserve in complete, un-redacted form all information in possession of the Select Committee or reasonably available to the Select Committee, including, but not limited to, all written correspondence and memoranda; emails; calendar entries; to-do list entries; telephone system records, logs, and transcripts, including for all cell phones, pagers, landlines, and other electronic devices; voicemails; text messages; instant messages; postings on social media, blogs, and other Internet sites; message board and chat room transcripts …”

The Jan. 6 panel has been a center of controversy almost to the day it was announced in 2021 by Speaker of the House Nancy Pelosi (D-Calif.), who appointed all of its current members after unilaterally barring two Republicans—Rep. Jim Jordan of Ohio and Rep. Jim Banks of Indiana—from serving on it, despite their having been named for the appointment by House Minority Leader Kevin McCarthy (R-Calif.).

Banks told reporters during a Jan. 6, 2022, House GOP news conference that the Democrats who control the Jan. 6 panel “aren’t investigating January 6, that is already abundantly clear … they are trying to use this select committee as a Trojan Horse to abolish the Electoral College, to intimidate President Trump’s aides, to block him from ever appearing on the ballot again, and to prevent his supporters from participating in American democracy.”

Banks also declared that Pelosi has yet to explain why she didn’t request the National Guard troops made available by Trump two days prior to the protest at the U.S. Capitol that resulted in one death and hundreds of injuries to law enforcement officers and protesters.

The Jan. 6 panel has issued hundreds of subpoenas and interviewed nearly 1,000 individuals in connection with the Capitol breach. Republicans question the panel’s legitimacy because it was authorized in a House vote to five GOP members appointed by McCarthy.

But after rejecting Banks and Jordan, Pelosi selected Rep. Liz Cheney (R-Wyo.) and Rep. Adam Kinzinger (R-Ill.), who both voted to impeach Trump. Long-established congressional procedures require the leader of the minority party to determine which members of his or her caucus serve on committees.

Davis’s preservation demand letter also directed Thompson to preserve a lengthy list of other documents, including draft and final versions of all committee memoranda, whether completed or not, all threat assessments or other intelligence reports given to the committee, all social media posts made by members and staff through the committee’s servers and network and those made through other servers and networks, memoranda of agreement with all witnesses, and a complete list of all committee staffers, detailees, interns, contractors and consultants “as of July 1, 2021, and as of June 8, 2022.”

Copies of the letter were delivered to Pelosi, all other members of the Jan. 6 panel, and Rep. Zoe Lofgren (D-Calif.), the current head of the House Administration Committee.

A spokesman for the select committee couldn’t be reached by press time for comment on Davis’s letter.