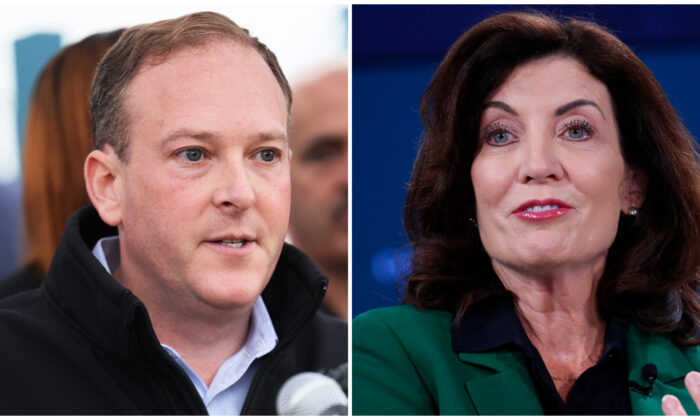 Frustrated with New York Gov. Kathy Hochul’s halfhearted attempt to get serious on crime, a decades-long Democrat state lawmaker says he will vote for her Republican challenger in the upcoming election.

“The No.1, No.2 and No.3 issues for New Yorkers are crime, crime, crime,” Dov Hikind, a Brooklyn Democrat who had served as an assemblyman in the New York State Legislature for 35 years until 2018, told The Epoch Times’ sister media NTD News after the last and only debate before the Nov. 8 gubernatorial race.

During the hour-long debate on Tuesday night, Hochul faced off with Rep Lee Zeldin (R-N.Y.) and took on topics including the economy, abortion, and COVID vaccine mandates. But the most heated exchange took place when Zeldin charged Hochul with failing to address rampant subway crimes and hate crimes targeting Jewish and Asian communities.

Hochul, who ascended to the governorship after former Governor Andrew Cuomo resigned amid a sexual harassment scandal, fired back by accusing the Long Island Republican of trying to “keep people scared” about crimes more than they should, while insisting that her criminal justice policies are “making a difference.”

“Anyone who commits a crime under our laws, especially with the change they made to bail, has consequences. I don’t know why that’s so important to you,” the Democrat incumbent said at one point.

Hochul’s response, Hikind said, shows that she “has no clue” whatsoever as to what concerns New Yorkers the most.

“There’s a 40 percent decrease in the number of people using the New York City subway system. That’s crazy,” he told NTD News. “I don’t blame people. They’re afraid. They’re concerned. They see the things that are happening on the subway system and in the streets of New York.”

“Hochul has no clue, and I think it was very clear last night,” Hikind continued, adding that he was “dumbfounded” about whether Hochul has a plan for the future at all. He also pointed to the fact that the governor didn’t start campaigning on the issue of crime until very recently when polls showed Zeldin steadily narrowing her lead.

In a campaign ad launched last week, Hochul highlighted her opponent’s ties to President Donald Trump. The ad features footage of Trump at an April 2022 event at his Mar-a-Lago home saying, “Lee fought for me very, very hard.” It also shows Trump giving Zeldin a supportive tap on the shoulder.

“Zeldin voted with Trump, too—nearly 90 percent of the time, against tougher gun laws, for extreme anti-abortion laws,” the narrator says in an ominous voice. “Zeldin even voted to overturn the 2020 election to keep Trump in power.”

The more ads like this Hochul runs, the better Zeldin will be performing in the election, Hikind said.

“Lee Zeldin was going up in the polls because the people of the State of New York understand that if there is no freedom to live, to breathe, to walk the streets, the rest is really just not important.”