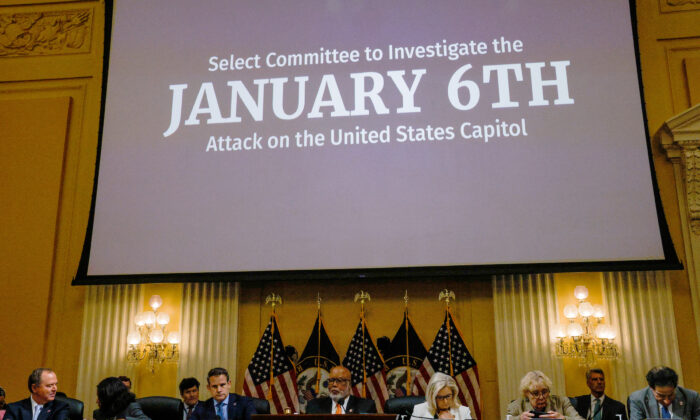 Members of the U.S. House Select Committee to Investigate the January 6 Attack on the United States Capitol are seen during the fifth public hearing of the committee in Washington on June 23, 2022. (Jim Bourg/Reuters)
Viewpoints

The Select Committee to Investigate Jan. 6 has adjourned for a well-deserved summer break. Misleading the public is exhausting work.

A careful review of the official transcripts of its eight long hearings shows the committee repeatedly made connections that weren’t there, took events and quotes out of context, exaggerated the violence of the Capitol rioters, and omitted key exculpatory evidence otherwise absolving former President Donald Trump of guilt. While in some cases, it lied by omission, in others, it lied outright. It also made a number of unsubstantiated charges based on the secondhand accounts—hearsay testimony—of a young witness with serious credibility problems.

These weren’t off-the-cuff remarks. Panelists didn’t misspeak. Their statements were tightly scripted and loaded into teleprompters, which they read verbatim.

In other words, the committee deliberately chummed out disinformation to millions of viewers of not just cable TV, but also the Big Three TV networks—ABC, CBS, and NBC—which agreed to preempt regular daytime and even primetime programming to air the Democratic-run hearings. And because Democrats refused to allow dissenting voices on the panel or any cross-examination of witnesses, viewers had no reference points to understand how they, along with the two Trump-hating Republicans they allowed on the committee, shaded the truth.

This charade of an honest investigation appears to have had the desired effect. Polls show the Jan. 6 hearings hurt Trump, who plans to run again, with independents. Unaffiliated voters have grown more likely to blame Trump for the Capitol riot and to show support for Democrats in the midterms, according to a new Morning Consult/Politico survey.

With the November elections fast approaching, Democrats plan to hold another round of hearings next month, hoping voters pay even closer attention. With that in mind, it’s important to examine the false claims and distortions they no doubt will repeat. They are legion. Here’s the fact-checking the viewing public—and the electorate—thus far has been denied.

CLAIM: While committee Chair Rep. Bennie Thompson (D-Miss.) excoriated Trump for not calling off the Capitol rioters earlier, he claimed they were “savagely beating and killing law enforcement officers,” according to the transcript of his remarks from the prime-time July 21 hearing, carried live by the networks.

FACT: No police officer was killed during the riot.

CLAIM: During the same hearing, committee member Rep. Elaine Luria (D-Va.) faulted Trump for his “glaring silence” about the “tragic death of Capitol Police Officer Brian Sicknick, who succumbed to his injuries” suffered during the riot.

FACT: The D.C. medical examiner ruled Sicknick died of “natural causes,” not injuries, well after the riot. Luria seemed to perpetuate false rumors started by The New York Times that Sicknick was struck with a fire extinguisher, a fable debunked by both the coroner and the Sicknick family.

CLAIM: Thompson asserted Trump “summoned” a mob that was “heavily armed and angry.”

FACT: Not a single gun was recovered in the riot. For that matter, the only gun used during the four-hour melee was fired by a Capitol police officer, who killed an unarmed rioter, Ashli Babbitt—whose name was never mentioned in any of the hearings. Despite airing endless footage of rioters breaching the Capitol and fighting police, the committee omitted footage of USCP Lt. Michael Byrd shooting Babbitt from behind a doorway without warning, which was the most violent incident that occurred that day.

CLAIM: The committee put a former far-right extremist on as a witness to testify that rioters built “a gallows” to allegedly hang then-Vice President Mike Pence.

FACT:  The witness, Jason Van Tatenhove, wasn’t at the Capitol that day. He had no insider knowledge about the purpose of the flimsy wooden structure erected across from the Capitol. In any case, it was a mock gallows, not a functional one. Even the New York Times recently acknowledged it “was too small to be used.”

CLAIM: Committee Vice Chair Rep. Liz Cheney (R-Wyo.) proclaimed in the hearing curtain-raiser—also held in primetime and broadcast live by all three networks—that the panel had evidence Trump said Pence “deserves” to be hanged, a chilling claim if true. “Aware of the rioters’ chants to hang Mike Pence,” she asserted, “the president responded with this sentiment: ‘Maybe our supporters have the right idea,’ Mike Pence quote ‘deserves it.’”

FACT: Her “evidence” turned out to be a secondhand retelling by witness Cassidy Hutchinson, a White House assistant fresh out of college who overheard a paraphrasing of what Trump may have thought about the chants, not a direct Trump quote as Cheney implied. Hutchinson later testified Trump said, “something to the effect of,” Pence “deserves it.”

FACT: Former White House lawyer Eric Herschmann insisted that he actually wrote the note, not Hutchinson, adding a serious chink in her credibility as the committee’s star witness. “The handwritten note that Cassidy Hutchinson testified was written by her was in fact written by Eric Herschmann on January 6, 2021,” said a spokesperson for Herschmann, who noted that Herschmann told the committee that in his deposition. The panel never informed the public that Hutchinson’s claim was disputed.

CLAIM: Based on Hutchinson’s testimony, the committee also claimed that former White House counsel Pat Cipollone said Trump’s plan to march to the Capitol would cause Trump officials to be “charged with every crime imaginable.”

FACT: Cipollone didn’t corroborate the claim in his sworn deposition before the committee.

CLAIM: The committee relied on another second-hand account by Hutchinson to broadcast to the world the alleged bombshell that Trump tried to physically commandeer his Secret Service limo to the Capitol. “When the president got in ‘The Beast’ … he thought they were going up to the Capitol,” Hutchinson testified, relaying what she’d heard from a security official who had heard it from another source. But when Trump was told he had to go back to the White House, she continued, Trump got “irate” and said “something to the effect of ‘I’m the [expletive] president, take me to the Capitol now,’” and proceeded to “grab at the steering wheel.” She claimed he even “lunged” at a Secret Service agent inside the vehicle.

FACT: Trump rode in a different motorcade vehicle than “The Beast” that day (an SUV, not the famous Cadillac limo), and several Secret Service agents have denied any physical altercation took place, casting further doubt on Hutchinson’s reliability as a key witness for the panel (records show she kept working for Trump in his post-presidential office for nine weeks after he left the White House, even though she claimed to be “disgusted” by what happened on Jan. 6, which she said was based on “a lie” peddled by Trump that the election was stolen). After pushback from the Secret Service, the committee leaked to CNN that a D.C. police officer “has corroborated” Hutchinson’s testimony. But when DCPD Sgt. Mark Robinson testified in the final hearing, he failed to corroborate her tale of Trump grabbing the steering wheel or lunging at a member of his security detail. “The only description I received was that the president was upset and was adamant about going to the Capitol and there was a heated discussion about that,” Robinson said.

CLAIM: Throughout the hearings, the committee cited Trump’s speech at the Ellipse as the spark that ignited the riot. “There can be no doubt that [Trump] commanded a mob, a mob he knew was heavily armed, violent, and angry, to march on the Capitol to try to stop the peaceful transfer of power,” Thompson said in the last hearing. Emphasized Luria: “Donald Trump summoned a violent mob and promised to lead that mob to the Capitol.”

FACT: While Trump did urge supporters to “walk” with him down to the Capitol after the rally, he specifically asked them to do so “peacefully.” The committee left that key exculpatory phrase out of the hearings. It never aired the footage or transcript of him saying, “I know that everyone here will soon be marching over to the Capitol building to peacefully and patriotically make your voices heard.” If it had, it would have ruined the carefully crafted narrative that Trump incited violence. The omission was a critical deception.

CLAIM: In the opening hearing, Cheney read out loud a tweet Trump sent during the riot in which he said, “These are the things and events that happen when a sacred landslide victory is so unceremoniously & viciously stripped away from great patriots who have been badly & unfairly treated for so long.” She claimed Trump was justifying more violence.

FACT: But Cheney cut off the next line where Trump called for “peace” and told supporters to leave the Capitol. “Go home with love & in peace,” the rest of the tweet said. Cheney blinded millions of viewers watching to the full picture.

CLAIM: Cheney, who faces a Trump-endorsed challenger in her Aug. 16 primary race, kicked off the hearing with a bold charge: “President Trump summoned a violent mob and directed them illegally to march on the United States Capitol.” She vowed to show “evidence” to back it up. Thompson said they would prove that Trump was “at the center” of a “seditious conspiracy.”

FACT: Not only did they fail to deliver any hard evidence that Trump ordered rioters to attack the Capitol as part of a conspiracy, they also began to contradict themselves as the hearings progressed. Thompson later said Trump merely “spurred” the mob and “energized” extremists, which is quite different from directing them. In an unintended revelation, one of their witnesses presented a timeline that suggested the instigators of the breaches of the Capitol had already headed to the Capitol before Trump spoke at the Ellipse. Documentarian Nick Quested testified the Proud Boys marched to the Capitol at 10:30 a.m., which meant Trump couldn’t possibly have incited them. “I was confused to a certain extent why we were walking away from the President’s speech,” said Quested, who was embedded with the Proud Boys.

Despite taking more than 1,000 depositions and subpoenaing more than 140,000 documents, the committee never found a smoking gun proving Trump was involved in a top-down organization of the riot. There was no coordination or conspiracy, which tracks with what the Biden Justice Department has found. Of the 874 criminal cases prosecutors have brought against Trump supporters at the Jan. 6 riot, none of them names Trump as an unindicted co-conspirator.

But don’t take my word for it.

Former Democratic Sen. Heidi Heitkamp, a former state attorney general, told ABC News’s “This Week” that the committee has come up short on proof of conspiracy.

“They don’t have a nexus yet [between Trump and the Capitol rioters],” she asserted.

Senior CNN legal analyst Laura Coates, moreover, said the committee “fell short in trying to establish very clearly that Donald Trump gave a coherent order that then was followed” to storm the Capitol, adding it presented “innuendo” but no proof of “a conspiracy.”

No one excuses the real crimes committed that day. But the average American deserves to see a fuller picture of what happened, instead of the distorted one lensed by the Jan. 6 Committee, which was charged with presenting all the facts, not just ones that could hurt Republicans or pre-impeach Trump in 2024.

If the committee really had the goods on Trump, it wouldn’t feel the need to deceive the public to the extent it has with all the embellishments, exaggerations, questionable testimony, omissions, and flat-out lies. Why not just play it straight?