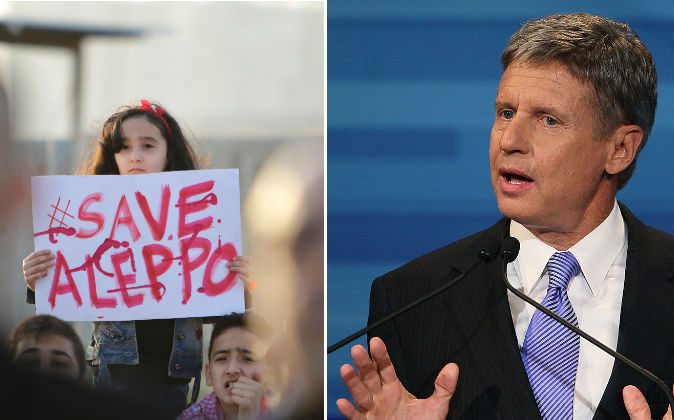 A Syrian girl holds a placard during a rally in solidarity with Aleppo, in the Lebanese northern port city of Tripoli, on May 1, 2016; Former New Mexico Gov. Gary Johnson speaks in the Fox News/Google GOP Debate at the Orange County Convention Center in Orlando, FL., on Sep. 22, 2011. (IBRAHIM CHALHOUB/AFP/Getty Images; Mark Wilson/Getty Images)
2016 race

A former U.S. ambassador to Iraq, as well as The New York Times, also misidentify the Syrian city
By Steven Klett

Libertarian presidential candidate Gary Johnson stumbled when he was asked a question about the Syrian city of Aleppo, a highly contested battleground in the Syrian conflict.

“What would you do if you were elected about Aleppo?” MSNBC’s “Morning Joe” panelist Mike Barnicle asked the former New Mexico governor during an in-studio interview Thursday morning.

“And what is Aleppo?” Johnson said.

Johnson explained that he was not kidding, and the panelist told the presidential candidate that Aleppo is “the epicenter of the refugee crisis” in Syria, which gave Johnson enough information to answer the question.

“Okay, Got it. Well, with regard to Syria, I do think that it’s a mess,” he said before laying out his position of working closer with the Russian government in the war-torn country.

“I think the only way that we deal with Syria is to join hands with Russia to diplomatically bring that at an end but when we’ve aligned ourselves with—when we have supported the opposition, the Free Syrian Army, the Free Syrian Army is also coupled with the Islamists, and then the fact that we’re also supporting the Kurds and this is, it’s just a mess,” Johnson said.

Co-host of the show Joe Scarborough jumped on the foreign policy misstep in his followup question.

“You asked ‘what is Aleppo?’ Do you think that foreign policy is so insignificant that somebody running for president of the United States shouldn’t even know what Aleppo is, where Aleppo is, why Aleppo is so important?” Scarborough asked.

The fallout from the comments have been swift, and Johnson released a formal statement saying that he “blanked.”

“This morning, I began my day by setting aside any doubt that I’m human,” he said.

“Yes, I understand the dynamics of the Syrian conflict—I talk about them every day. But hit with ‘What about Aleppo?’ I immediately was thinking about an acronym, not the Syrian conflict. I blanked. It happens, and it will happen again during the course of this campaign.”

Started my day by setting aside any doubt I’m human. #WhatIsAleppo? My statement: https://t.co/CDKbaA288l

But Johnson was not the only on the person on the show who misidentified the Syrian city. Former U.S. ambassador to Iraq, Christopher Hill, when asked by Joe Scarborough about Johnson’s flub, incorrectly described Aleppo—rather than Raqqa—as the “capital of ISIS.”

#ProTip: Dont use FP credentials to criticize politician for not knowing what Aleppo is & then say it’s ISIS capital pic.twitter.com/aYPTcCWQOq

The New York Times, in their reporting on Johnson’s comments, also erroneously referred to Aleppo as “the de facto capital of the Islamic State.” The newspaper also said that Aleppo, not Damascus, is the capital of Syria.

The @nytimes, while chiding Gary Johnson for a “surprising lack of foreign policy knowledge,” gets basic fact wrong pic.twitter.com/15OAr2IGc1

The New York Times later issued corrections for both claims.

Johnson has been making a big push in recent weeks to meet the required 15 percent to get on the first debate stage. His campaign aired its first TV ads last week and is receiving support from former Republican presidential candidate Mitt Romney who said that Johnson should be on the debate stage.