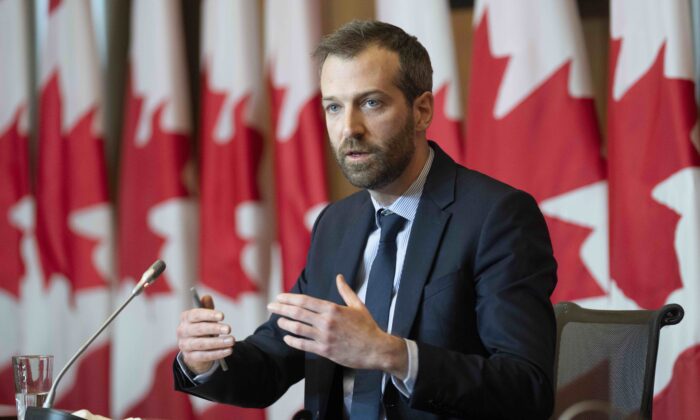 Liberal MP for Louis-Hebert Joël Lightbound speaks about COVID-19 restrictions during a news conference on Feb. 8, 2022 in Ottawa. (The Canadian Press/Adrian Wyld)
By Noé Chartier

Liberal MP Joël Lightbound gave a solo press conference this morning to call on his own government to lift COVID-19 restrictions and to change its divisive tone on the issue.

Taking an opposing stance to his party’s leader, Prime Minister Justin Trudeau, Lightbound said legitimate concerns about restrictive policies should not be dismissed and governments should not “demonize those who voiced them.”

The MP representing the Louis-Hébert riding said such an approach needs to stop, saying the vaccination issue is being used by Trudeau as a wedge to divide people and score political points.

“I can’t help but notice with regret that both the tone and the policies of my government changed drastically on the eve, and during, the last election campaign,” said Lightbound at a press conference on Feb. 8.

Along with his plea to tone down the rhetoric, Lightbound made other recommendations to move forward, saying the government should provide a roadmap with measurable targets, such as hospitalization levels, to lift all restrictions within its purview.

He said Canadians are finding it harder to comply with restrictions because the government “no longer cares to explain them,” adding that policies such as the vaccine mandate for truckers is not based on science nor economically sound.

The MP, who also chairs the Quebec caucus, said he’s looked for the data supporting these policies but hasn’t found it.

“This leads me to humbly suggest that the government should systematically publish the epidemiological projections and the scientific analysis underpinning the measures it imposes going forward,” he said.

Citing a third solution, Lightbound said capacity building within the health care system is essential to prepare for future waves, and as such, the federal government should start negotiating health transfers with the provinces and territories.

“The government’s position is quite frankly hard to understand. On the one hand, we say that we will not be negotiating the transfers before the pandemic ends. And on the other hand, we say that the pandemic will last for years. If you want to be able to truly live with the virus without resorting to the violence of lockdowns, these discussions cannot wait,” he said.

Despite his dissent from the party position, Lightbound said he plans on remaining a Liberal, but could no longer keep quiet after raising the issue internally. He said other colleagues share his concerns, though they have yet to step forward.

The MP had opened his remarks by condemning the display of hateful symbols amid the Freedom Convoy protest in Ottawa, while also calling for its end, but he then shifted to say he disagrees with the generalizations that have been made about the protest.

“I’ve seen on [CBC] Radio-Canada an interview with what seemed to be a very kind grandmother who demonstrated for her grandkids, she looked and sounded nothing like a white supremacist,” said Lightbound.

“Nor did the black, Sikh and indigenous Canadians I saw demonstrating on my way to Parliament these last two weeks, or in Quebec City this last Saturday. I have enough respect for my fellow Canadians not to engage in these easy and absurd labels.”

Opponents of the Freedom Convoy have latched onto pictures of an individual holding a Nazi flag, and the holding or display of at least two Confederate flags on Jan. 29 to try to paint the entire group as racist and bigoted.

Moving on from the protest, Lightbound said he was speaking out on behalf of constituents and citizens who’ve reached out to him recently to express concerns about where the country is going with its restrictive COVID-19 policies.

“I’ve heard from parents worried to see their kids sink into depression and slowly lose their joy of living. I’ve heard from pediatricians in tears telling me about their young patients’ despair, anxiety, isolation, as well as the stunning increase in school dropouts they are observing,” said Lightbound.

“I’ve heard from artists who are on the brink of mental and financial collapse after two years, with barely enough work to get by. I’ve heard from social workers answering suicide hotlines, who are overwhelmed by the number of calls they’re receiving. I’ve heard from entrepreneurs and restaurant owners who are contemplating losing what they’ve spent their whole lives building.”

Lightbound went on to note examples of how COVID-19 health policies have had far-reaching consequences, such as some Canadians selling everything to move to the United States, presumably to enjoy a less restrictive environment, as well as teachers worried about schoolchildren reenacting segregation between vaccinated and unvaccinated kids in the schoolyard.

The Liberal MP then said that Canadians are confused about the legitimacy of health measures when they hear from health experts like Chief Public Health Officer Dr. Theresa Tam recently saying policies like the vaccine passports need to be re-examined, and when they see other countries with lower vaccination rates than Canada opening up, or the WHO recommending dropping border measures such as vaccine requirements since they can’t stop the spread of the Omicron variant.

“Now, while folks are hearing and seeing all of this, they’re left rightfully wondering, where the hell are we heading here in Canada? I think there lies the frustration. They feel there is no appetite from our government to adapt so as to reflect the changing data and the changing reality of the pandemic and of the world,” Lightbound said.

“They’re worried that measures that ought to be exceptional and limited in time, are being normalized with no end in sight.”

Conservative MPs were quick to show support on Twitter after his address.

“The statements from Joël Lightbound demonstrate it is time to act with respect. Yes, his words are aligned with ours: he’s had enough of the divisive politics from the Prime Minister,” said former House Leader and Québec MP Gérard Deltell.

“In the context of the pressure exerted by party caucuses in our system, Joël Lightbound has shown immense courage today,” said Saskatchewan MP Garnett Genuis.

“We also see that courage is contagious. It’s time for more MPs to speak out for unity, common sense, and hope. Things are changing.”