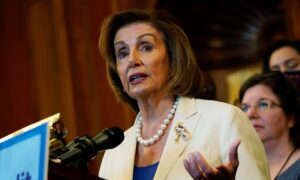 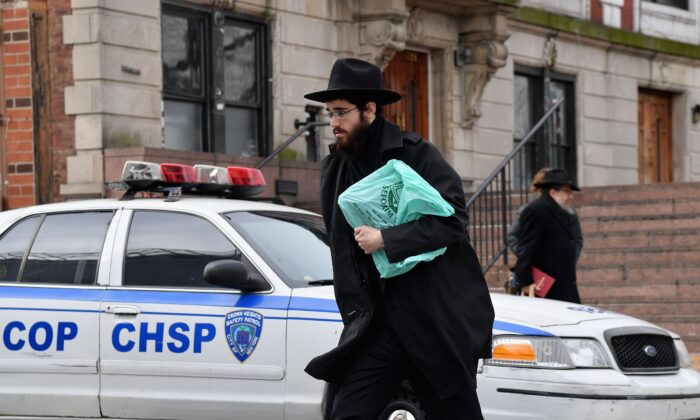 An Orthodox Jewish man walks in the Brooklyn neighborhood of Crown Heights in New York on Feb. 27, 2019. (Angela Weiss/AFP via Getty Images)
US News

Critical social justice (CSJ) ideology, which includes critical race theory, is “enabling new forms of antisemitism” in America, according to a new white paper to be made public on Sept. 1 by the Gaithersburg, Maryland-based Jewish Institute for Liberal Values (JILV).

“While there are differing perspectives within CSJ, the more radical and anti-Jewish ideas are not being held in check and there is evidence that the more extreme versions are gaining ground and influencing public discourse,” according to the white paper, of which an advance copy was made available to The Epoch Times.

“To be clear, we are not discounting that racism exists and needs to be addressed; rather, we are concerned about how this particular ideology is in practice enabling new forms of antisemitism.”

“Critical theory” originated in Germany’s Frankfurt School of thought based on Marxism, which holds that a society’s “oppressor” and “oppressed” classes can be analyzed through the particular prism of a factor such as economics, privileges of powerful classes, or gender.

Titled “Critical Social Justice and Anti-Semitism,” the JILV analysis was authored by David Bernstein, the think tank’s founder and CEO; Nicole Levitt, who oversees policy and legal affairs; and Daniel Newman, who manages its marketing and technology.

The white paper cited seven factors that make CSJ a significant factor in fueling antisemitism: the canard of Jewish privilege, the erasure of Jewish identity, intersectionality and antisemitism, the “anti-Israel binary,” the marginalization of Jews in politics, Jews and equity, and the undermining of Enlightenment principles.

The JILV is devoted to helping “Jewish organizations and individuals hold constructive conversations about CSJ and ensure balanced approaches” in assessing the ideology as it impacts culture, the economy, politics, and society in general.

“As if lifted straight out of the ‘Protocols of the Elders of Zion,’ some CSJ proponents resurrect the age-old stereotype of the Jew as power broker secretly running the show,” the white paper said regarding the canard of Jewish privilege.

“Moreover, CSJ lacks the subtlety or nuance to think outside the simplistic terminology of power or power politics, so it necessarily squeezes relatively successful groups like Jewish Americans into the Procrustean bed of the oppressor class.”

The “Protocols” is a vicious antisemitic tract that first appeared in Tsarist Russia early in the 20th century. The original author of the tract is unknown, but it “describes the alleged ‘secret plans’ of Jews to rule the world by manipulating the economy, controlling the media, and fostering religious conflict,” according to the “Holocaust Encyclopedia.”

The white paper pointed out that the term “Jewish privilege” trended strongly on Twitter in the summer months of 2020, while several discussion rooms on another social media app, Clubhouse, were shut down because they were dedicated to talking about the topic.

“When Haredi Jews were victims of violent attacks in New York in 2018, a year before another spike in bloody attacks, the executive director of the Black Movement Center in Crown Heights, Mark Winston Griffith, told The Forward that some black Americans see Judaism as ‘a form of almost hyper-whiteness,’” the white paper said.

The erasure of Jewish identity, the second factor discussed by the white paper, represents the manner in which CSJ advocates force a unique ethnic identity into the two broader classes of oppressed and oppressor.

“Daphna Kaufman of Reutgroup coined the term ‘erasive antisemitism’ for the designation of Ashkenazi Jews from Europe as ‘white,’” the white paper said.

“This racialization of Jewish identity erases Jewish identity in favor of the CSJ binary of ‘oppressed person of color’ or ‘white’ oppressor. In this ideological framework, Jews are not afforded the status of a distinct people worthy of self-determination.”

The white paper puts forth six steps that JILV recommends to combat CSJ and antisemitism, including encouraging individual advocates of classical liberal values like tolerance of opposing viewpoints, litigating to oppose “diversity” programs based on CSJ, organizing new advocacy groups to support liberal values, creating a new coalition of such groups, mounting highly targeted anti-CSJ campaigns, and advancing alternative diversity models that include diversity of viewpoints as well as ethnicities.

“A central strategy must be to embolden those who quietly oppose CSJ to speak out publicly. Most critics of the ideology hold back for fear of losing their jobs and social status,” the white paper said.

“Only when a critical mass of people come forward will the ideology be exposed as representing the views of a small percentage of the population and will institutions rethink their ideological commitments.”