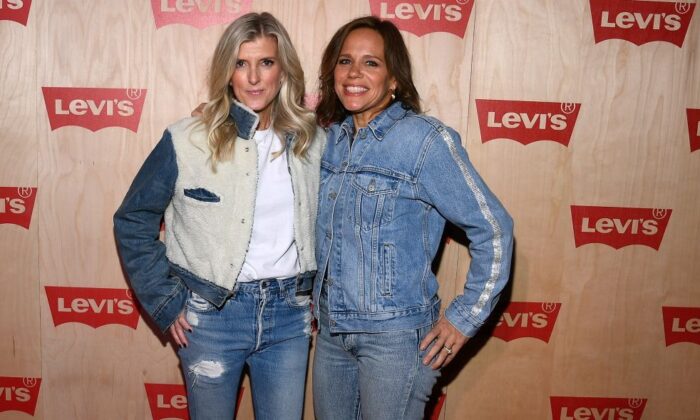 Jennifer Sey, on the right, at the Levi's Times Square Store Opening in New York City on Nov. 15, 2018. (Dave Kotinsky/Getty Images for Levis)
By Jack Phillips

The former executive vice president and president of clothes maker Levi Strauss & Co. said she quit and walked away from $1 million because of her views against COVID-19-related school closures.

“More than 20 years ago, I joined Levi’s. I quit so I could be free,” Jennifer Sey wrote on Twitter, linking to her article published in former New York Times editor Bari Weiss’s Substack newsletter.

Sey said she started working her way up Levi’s corporate ladder in 1999, but when the COVID-19 pandemic started to unfold in early 2020, the mother of four became an advocate for keeping schools open.

The 52-year-old organized rallies and spoke to local media outlets against school closures. However, management in Levi’s condemned her for her stance, and Sey recalled in the summer of 2020 that a corporate communications manager told her to “pipe down.”

“I refused to stop talking. I kept calling out hypocritical and unproven policies, I met with the mayor’s office, and eventually uprooted my entire life in California—I’d lived there for over 30 years—and moved my family to Denver so that my kindergartner could finally experience real school,” she wrote.

After appearing on Fox News to describe her experience, Sey said that others in Levi’s lodged left-wing labels at her.

The Fox appearance “was the last straw,” she wrote. “The comments from Levi’s employees picked up—about me being anti-science; about me being anti-fat (I’d retweeted a study showing a correlation between obesity and poor health outcomes); about me being anti-trans (I’d tweeted that we shouldn’t ditch Mother’s Day for Birthing People’s Day because it left out adoptive and stepmoms); and about me being racist, because San Francisco’s public school system was filled with black and brown kids, and, apparently, I didn’t care if they died.”

At one point in her article, Sey said she was told by management that she could be the next Levi’s CEO if she stopped publicly speaking against COVID-19 rules.

“In the last month, the CEO told me that it was ‘untenable’ for me to stay. I was offered a $1 million severance package, but I knew I’d have to sign a nondisclosure agreement about why I’d been pushed out,” said Sey, who is a former gymnast who competed for the United States in the 1986 Goodwill Games. “The money would be very nice. But I just can’t do it. Sorry, Levi’s.”

Levi’s didn’t respond to a request for comment by press time.