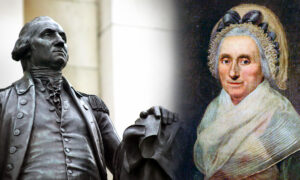 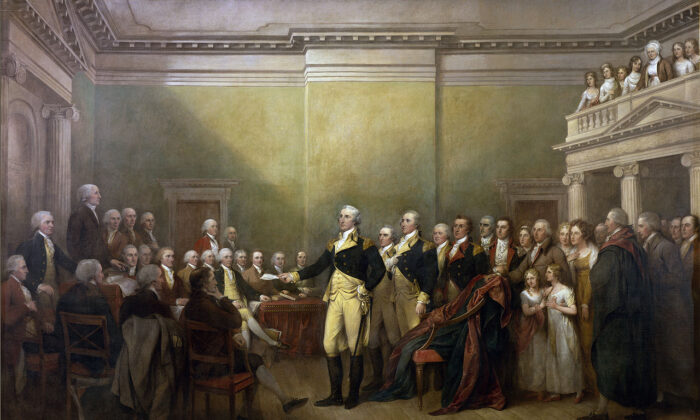 Whether dealing with conflicts or fame and power, the Founding Father set a remarkable example
By Dustin Bass

For a large portion of his illustrious military and political career, George Washington possessed such power. But it is how he restrained that power that speaks volumes to us today in how to deal with others.

The following are three pivotal moments that proved Washington’s character.

The Demand for British Acknowledgement

When the British troops landed en masse on our shores, they were under the leadership of the Howe brothers―Richard and William. They desired a meeting with the commander-in-chief of the Continental Army―an army that they, King George III, nearly all of Parliament, most British citizens, and the Tories considered nothing more than a band of rebels destined for ultimate defeat. Not only had the Howes underestimated the “glorious cause” of that rebellion, but also the man who led that cause.

On July 14, 1776, they sent Lt. Philip Brown with a message addressed to Washington. Brown never reached Washington, as Henry Knox, Joseph Reed, and Samuel Webb were sent by Washington to meet him. Upon asking who the letter was addressed to, Brown responded, “George Washington, Esq. etc. etc.”

Knox, Reed, and Webb feigned perplexity. No such person existed. Perhaps truly perplexed, Brown asked who the letter should be addressed to. The three responded that everyone knew who “General Washington” was after the events of the summer of 1775. Brown and the letter were sent back to William and Richard Howe.

A second attempt ended very much the same way, as the letter was addressed to “George Washington, Esq.”

It was not until the third letter, and three days after sending the first, that the British command understood how seriously Washington took the situation. The third letter was addressed “His Excellency George Washington.” Upon receipt, Washington agreed to meet with William Howe’s adjutant general, Lt. Col. James Paterson.

It was not only that the letter was inappropriately labeled, but that it would be truly inappropriate for him to open such a letter. Not only because was it addressed to a private citizen, which he was not, but that to open such a letter would demean his position, and to acquiesce to such an insult―real or implied―would be to demean his officers, his army, Congress, and most importantly, the cause for which they were fighting. Therefore, this moment with the letter was not just about demanding respect for his position.

Washington understood the fragility of the situation. His situation, and that of the new nation’s, could easily be undermined through even the slightest misperception by his enemies and his fellow patriots. Washington was necessarily conscious of every detail―even those that appeared trivial.

The victory of Gen. Horatio Gates and the surrender of Gen. John Burgoyne’s army at Saratoga in October 1777 convinced the French to accept American independence and begin helping us with military aid.

After the Christmas miracle of 1776, 1777 was less than miraculous for Washington. He had undergone a number of defeats. Congress had fled Philadelphia as the British took the city. And now all eyes were on the success of Gates, who was a proven general, and, for Washington’s critics, a happy alternative.

Washington was aware of his critics in Congress and even in the army, the aforementioned Reed being among them. But something else was now afoot. After the victory at Saratoga, three generals, with the support of numerous members of Congress, would begin a pincer movement to undermine, and even attempt to remove, Washington from command and replace him with the victorious Gates.

These three generals were Gates, Thomas Mifflin, and Thomas Conway.

After a week of negotiations, Burgoyne signed the articles of surrender on Oct. 17, 1777, ending the Battle of Saratoga. Washington would receive word on Oct. 18, not from Gates, but from Gov. George Clinton of New York. A week later, in a letter to John Hancock about a shortage of supplies, Washington mentioned in passing that he had yet to hear from Gates about the surrender. Hancock replied that he also had yet to hear from Gates. It was not until Nov. 2 that Gates would send a mere three-sentence letter to Washington―his superior―regarding the single biggest development of the war. Washington fumed, but not publically, nor even to the offending general.

When Gates’s aide, James Wilkinson, was sent to inform Congress of the Saratoga news, he ran into Lord Stirling’s aide. Known for his loose-lipped nature, Wilkinson discussed the harsh comments Gates had made about Washington’s leadership at Brandywine Creek. He also showed Stirling’s aide a line in a letter from Gen. Conway to Gates that read: “Heaven has been determined to save your country or a weak general and bad councillors would have ruined it.”

Stirling told Washington what Wilkinson had said and shown to his aide. When Washington confronted Gates about Conway’s letter, Gates feigned outrage, suggesting it was impossible, and even that it was most likely Alexander Hamilton, who had copied a forgery. Hamilton had recently visited Gates, upon Washington’s request.

Washington informed him that the “wretch” and “traitorous thief,” as Gates had called the person, was in fact his own aide. It may have been pleasing to inform Gates of this, but it could not have alleviated the worry or resentment he felt about two generals colluding against him.

Washington was already well aware of the shortcomings of Gates and Conway. His study of Mifflin would prove no different, though he found it all the more disturbing that he would be betrayed by one whom he had befriended and appointed as one of his initial aides.

When Congress reorganized the Board of War from a legislative committee into an executive agency, it placed Thomas Mifflin on it—and Mifflin would ensure Gates would be the board’s president. Though Gates would remain a major general, his new position gave him a supervisory role over Washington. A few weeks later, the Board of War created an inspection system, naming Conway as its inspector general. Washington could see the writing on the wall, especially after Conway was promoted to major general—a position Richard Henry Lee, a representative from Virginia in the Second Continental Congress, had assured Washington only two months prior that Conway would never receive.

When Conway arrived at Valley Forge, he indicated he was “coolly received,” an accusation Washington had no reservation in accepting. Conway wrote to Washington in complaint, suggesting their conflict was due to the infamous letter to Gates, but that Washington should not take the “least notice” of the comment. He ruffled Washington even further by asking, “Must such an odious and tyrannical inquisition begin in this country?”

Conway would soon exit Valley Forge, and the Board of War would be dissolved. This would also end Mifflin’s and Gates’s positions over Washington.

Mifflin would soon be forced to resign as quartermaster general amid charges of mismanagement, which tarnished his reputation. After his rise at Saratoga, Gates would suffer a terrible fall after the devastating loss in the Battle of Camden during the Southern Campaign, where he—among others—fled the field, leaving behind the Continental regulars of Maryland and Delaware. He was shortly thereafter relieved of field command.

Conway continued to issue complaints to Congress, along with threats to resign—a threat he had issued to Washington at Valley Forge. In April 1778, Congress gladly accepted his resignation. His constant criticisms of Washington, however, continued.

Washington had garnered the loyalty of his soldiers and officers, which made the cool reception of Conway at Valley Forge all the more chilling. This loyalty to Washington was put on display in dramatic fashion when John Cadwalader challenged Conway to a duel. The duel ended with Conway shot in the mouth and neck. Cadwalader stared down at the bleeding Conway and stated, “I have stopped that [expletive] rascal’s lying anyway.”

Mifflin, Gates, and Conway were the authors of their own undoings. It required little action from Washington, as he understood how poor character and pride do destroy a man—Conway being the most visible proof.

Conway, during his recovery, did garner enough strength to pen a final letter to Washington before returning to France:

“I find my self just able to hold the penn During a few Minutes, and take this opportunity of expressing my sincere grief for having Done, Written, or said any thing Disagreeable to your excellency. my carreer will soon be over, therefore justice and truth prompt me to Declare my Last sentiments. you are in my eyes the great and the good Man. May you Long enjoy the Love, Veneration and Esteem of these states whose Libertys you have asserted by your Virtues. I am With the greatest respect sir your Excellency’s Most obedt humble Servant.”

The Resistance to Absolute Power

There is a famous John Trumbull painting hanging in the rotunda of the U.S. Capitol entitled “General George Washington Resigning His Commission.” Washington and his army had just defeated the greatest military power on earth. He was adored by all—from the soldiers to the citizens. There were hints that he should become king of this new country. A colonel in the army made the mistake of suggesting it in a letter. To this, Washington responded, as part of a seven-page rebuttal, “If I am not deceived in the knowledge of myself, you could not have found a person to whom your schemes are more disagreeable… if you have any regard for your country, concern for yourself or posterity, or respect for me … banish these thoughts from your mind.”

Washington resigned his commission in the Maryland State House in Annapolis. This act echoed the history of another great general from another great republic: Lucius Quinctius Cincinnatus of the young Roman Republic. Cincinnatus, who had served once as consul and turned down the opportunity to serve again because it was against the republic’s constitution, was called away from his farm to defend the republic when an enemy had attacked. He was made dictator by the senate, which gave him absolute power for a period of six months. In two weeks, Cincinnatus led his countrymen to victory. He then immediately resigned as dictator and returned to his farm.

In Baltimore, there is a 180-foot tower with a 15-foot-tall statue of George Washington atop. Washington, instead of being adorned in his military uniform, is in a toga—a reference to the great Roman, Cincinnatus. And Washington, like Cincinnatus, understood his country’s liberty would require he also deny the lust for power.

Reflecting on his famous painting, Trumbull stated: “What a dazzling temptation was here to earthly ambition! Beloved by the military, venerated by the people, who was there to oppose the victorious chief, if he had chosen to retain that power, which he had so long held with universal approbation? The Caesars, the Cromwells, the Napoleons, yielded to the charm of earthly ambition, and betrayed their country; but Washington aspired to loftier, imperishable glory—to that glory which virtue alone can give, and which no power, no effort, no time, can ever take away or diminish.”

When King George III, who fully anticipated Washington to become ruler, was informed by the court painter Benjamin West that Washington planned to resign and return to his farm, the king said, “If he does that, he will be the greatest man in the world.”