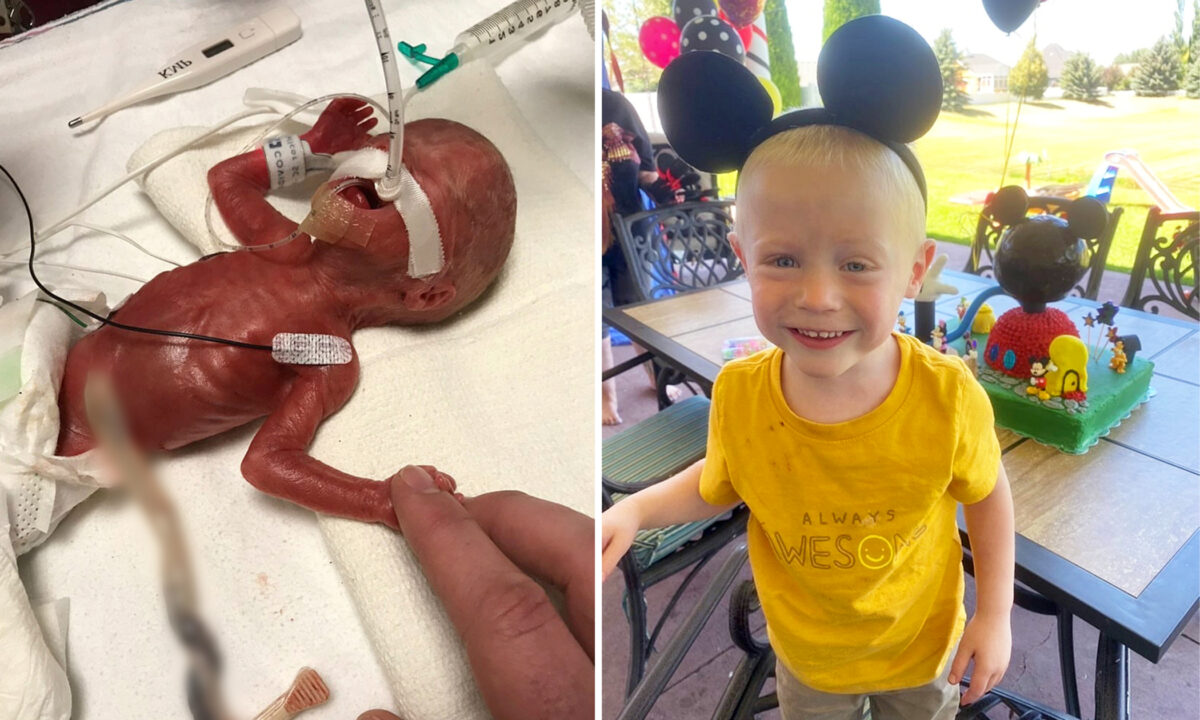 A tiny baby weighing less than a pound and born a week before the abortion limit has defied the odds to survive and thrive.

Mom Jessica Doxey, 30, was rushed to hospital when she was just 23 weeks pregnant and was diagnosed with life-threatening blood condition pre-eclampsia, a pregnancy complication marked by high blood pressure.

An emergency C-section was performed to save Jessica, who was warned her preemie son, who was just 15 ounces (435 g) at birth, was unlikely to survive. He was born so early, she said, doctors asked her if she wanted them to save her son.

Baby Kaio, who shares his name with his father, spent six weeks on a ventilator and 2 1/2 months in an incubator, replicating the womb. A few weeks before Christmas 2017, the Doxeys finally received the best present of all when little Kaio came home, aged 4 1/2 months.

“At no point in my mind was I willing to give up on our little boy,” said Jessica, a food scientist from Bakersfield, California.

“I’d been in so much pain over the last 72 hours but what kept me going was holding on to the belief that he’d be okay.

“The C-section took about an hour, and they had to use a general anesthetic to perform the surgery.”

She added: “When I woke up, I was really confused, and the doctors explained that Kaio was alive but weighed just 435 grams.

“They even invited my husband in so we could share what they thought would be our first and last moments with him in case he didn’t make it.

“But, that thought hadn’t even crossed our mind, and we were determined to save him.”

Mom-of-three Jessica recalled that she went into labor prematurely with her first child, Stella, 6, at 36 weeks. Jessica said she was reassured it was unlikely to happen again, but at 23 weeks pregnant with Kaio, she was rushed into the hospital after suddenly developing a severe headache.

She was diagnosed with pre-eclampsia. It usually occurs towards the end of the pregnancy, but for Jessica, this wasn’t the case, and her condition quickly worsened. A few days later, Jessica developed HELP syndrome, a pregnancy-related condition that affects the blood and liver.

Prior to the C-section, doctors gave Kaio a 40 percent chance of survival. However, once he was born, on July 7, that immediately dropped to a 10.

Jessica was discharged from the hospital a week after giving birth, and to give her newborn son the best chance of survival, she expressed breast milk for the entire 4 1/2 months and stored it in a special freezer at home, before bringing it into the hospital to feed her little son.

As time passed, baby Kaio became stronger, and Jessica and her husband, Kaio, 31, visited him around the clock, praying he’d survive.

“For weeks it felt like it was my fault because it was my body,” Jessica said. “It felt like my failing and it’s hard to let that go when you’re watching your child suffer. When you’re in that situation, every good thing that happens you’re afraid to enjoy it.

“Being at home whilst Kaio was in hospital, it felt like my heart was in a different place. Often it would be 4 a.m. and I’d suddenly panic and feel the need to be with him so I’d rush to the hospital.

“It was the hardest time of our lives, but that feeling of bringing him home was indescribable.

“Walking through our front door with him in our arms it seemed like everything was right in the world—we are truly grateful.

“I want to raise awareness and let other mums who have premature babies know it’s not their fault and that they shouldn’t blame themselves.”