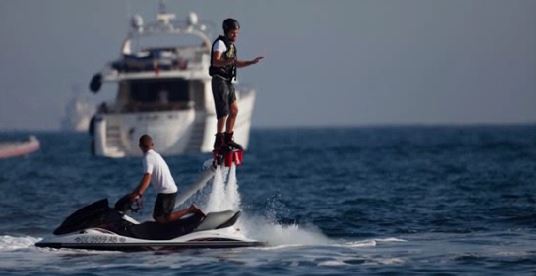 Actor Leonardo Dicaprio tried out a jetpack while in Ibiza with his girlfriend Toni Garrn.

He was using one type of jetpack for about half-an-hour, a source told E! News.

There’s several types of jetpacks going around nowadays. One, the Jetlev, can lift a person 30 feet high by pumping water from a backpack through a hose connected to a small, unmanned boat. Another contraption called the Flyboard, which looks like a small snowboard attached to a hose, can propel riders 45 feet in the air.

Ibiza is in Spain.

Some aren’t thrilled with the contraptions, which are showing up in multiple areas. University of Hawaii coral scientist Bob Richmond told officials in Hawaii he was concerned about the noise the devices make, as fish avoid areas that are too loud. He’s also worried fish and coral larvae could get pumped through some of the equipment the watercraft use and die.