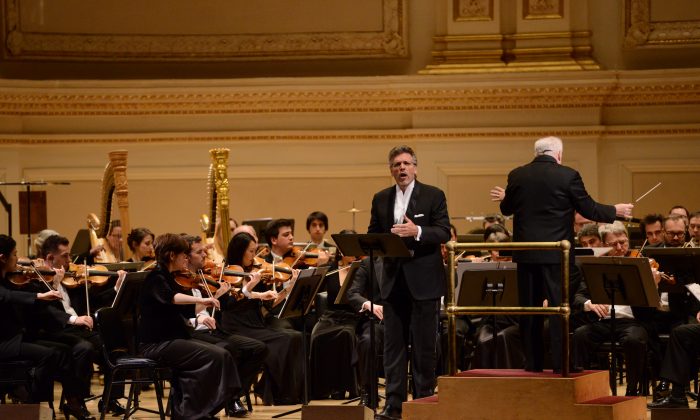 NEW YORK—The Orchestre National de Lyon appeared at Carnegie Hall with the help of three talented Americans: Leonard Slatkin, who has been its music director since 2011, and opera stars Thomas Hampson and Renée Fleming.

The Orchestra is noted for its playing of music by Maurice Ravel (1875–1937) and the program featured the work of this great composer.

The first piece on the program was “Antar,” a suite Ravel put together and re-orchestrated in 1910 from music by Russian composer Nikolai Rimsky-Korsakov (1844- 1908). The work was not published and was reconstructed by the Lyon Orchestra with a new addition: Amin Maalouf, best known for writing four librettos for Kaija Saariaho’s operas, was commissioned to write a text.

“Antar” was presented at the concert in an English translation by Matthew Hurt and Sarah Vermande.

In the Playbill, Maalouf writes, “The warrior-poet Antar and his beloved Abla are, in a way, the Romeo and Juliet of the Arab world. Everyone knows their story.” Antar rises from slavery to become the hero of his people. He marries his cousin Abla and he is killed in battle when she is pregnant with their first child. When her sister tells Abla of her husband’s death, she comforts her with the thought that life is a mirage and so is death.

The narrator was the eminent baritone Thomas Hampson. He, of course, has a beautiful speaking voice, and read the text with immense feeling. The music by Rimsky-Korsakov was reminiscent of his “Scheherazade” with its Arabian Nights flavor.

After the intermission, the first piece the Orchestra performed was by a contemporary French composer: Guillaume Connesson (born in 1970). The Orchestra performed the U.S. premiere of “Celephaïs” (2016), which was commissioned by the Lyon and Netherlands Philharmonic Orchestras. The tone poem is based on a story by American horror writer H.P. Lovecraft (1890-1937) and evokes an imaginary city with onyx streets and bronze gates. The impressive work fit in with the rest of the program.

Fleming managed to make the vast hall seem as intimate as a drawing room.

Renée Fleming sang Ravel’s “Shéhérazade” (1903), a setting of three poems by the composer’s friend, Tristan Klingsor. In the first, “Asia,” the singer longs for travels to the exotic lands of the East.  In the second, “The Enchanted Flute,” the singer hears her lover playing the flute. Each note is like a mysterious kiss. In “The Indifferent One,” the singer is smitten with a young man but he ignores her.

In this subtle, evocative work, Fleming managed to make the vast hall seem as intimate as a drawing room. She is as commanding in songs as in the more dramatic operas she usually performs.

The final piece on the program was Ravel’s Suite No. 2 from “Daphnis et Chloé” (1913), a tantalizing excerpt from the ballet score.

Slatkin and the Orchestra performed two encores: the “Barcarolle” from Offenbach’s “Tales of Hoffmann” and “Carmen’s Hoedown” by the conductor’s father, Felix Slatkin. This entertainingly zany work mixed melodies from Bizet’s “Carmen” with square dance music, complete with cries of “Yee-hah” at various points. It exemplified the Franco-American nature of the concert with its French music and orchestra led by an American with two U.S. soloists.

For home listening, Naxos recently released a wonderful recording of Slatkin and the Orchestre National de Lyon performing the complete “Daphnis et Chloé” ballet, which utilizes the orchestra as well as a chorus. The album is filled out with Ravel’s “Une barque sur l’océan.”

This is the fourth part of an ongoing series of recordings of Ravel’s orchestral works by Slatkin and the Lyon Orchestra.