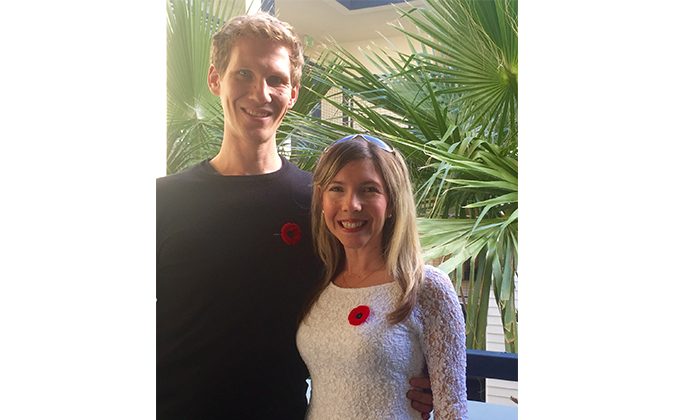 The poppy as a symbol for those who fell in the Great War is known throughout the Commonwealth thanks to Canadian surgeon Lt.-Col. John McCrae, who wrote “In Flanders Fields” in 1915. It has since been used to commemorate all military personnel who have died in war.

But the U.S. is not a Commonwealth country. Remembrance Day is known as Veterans Day there and the poppy is not worn. This may have left some wondering about Laura Krochko’s bright red poppy pin, traditionally worn until Remembrance Day, after which it is taken off.

Krochko is a Canadian living in San Francisco, where such pins are not easy to come by. She wanted to wear a poppy pin for Veterans Day, but at first she didn’t know if she would be able to get one in time for it to matter.

But then Karen Freitas, secretary of the San Fransisco Bay Area Branch 25 of the Royal Canadian Legion, surprised Krochko on Nov. 8 with a bag of over 50 poppy pins. Krochko has since been sharing the pins around the building where she lives with her Canadian husband Ryan Krochko. Ryan has also been giving them out at work.

“I had sent in the request last week,” Krochko says in a Facebook message. “And then, late Saturday night, a woman named Karen emailed me—turns out she is the Secretary for the San Francisco Bay Area Branch 25 of the Royal Canadian Legion.”

Freitas had gotten the request to deliver the poppies from Dominion Command, the Royal Canadian Legion’s HQ in Ottawa. Dominion had asked San Francisco Bay Area Branch 25 to help Laura get ahold of some poppies.

“Though she lives about two hours away, she was going to be in San Francisco Sunday for the Veterans Day Parade and asked if we could meet up, which unfortunately I wasn’t able to do,” explains Krochko. “Then on Sunday morning, she called to see if anything had changed.”

Freitas told Krochko that car trouble was keeping her from driving to meet with her, but said she would mail the poppies as quickly as possible.

“She took down my address and I thought, that was that … until later that evening around 7:30 p.m. when I received a surprise call from Freitas.

“She said she had gotten her vehicle looked at and would be able to stop by our neighbourhood with the poppies within the next 20 mins! So we met up with her and she gave me a baggie filled with 56 poppies (!!)”

Sharing her story two days before Remembrance Day, Krochko said she did her best to get the pins spread around. Some went with her husband to his office, others to fellow Canadians they’ve met down there, and some were left at her building for others to take and wear.

“I was amazed at the legion’s dedication,” she said.