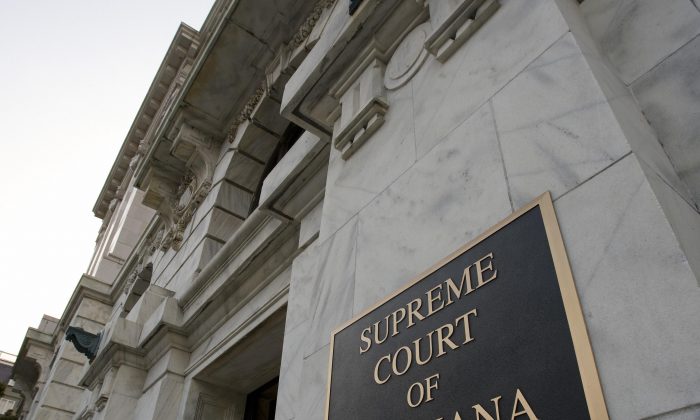 The exterior of the Supreme Court of Louisiana in New Orleans, on 24 Aug. 2007. (PAUL J. RICHARDS/AFP/Getty Images)
Opinion

The mandatory sentencing of juveniles to life without parole was declared unconstitutional in Miller v. Alabama, but will the high Court make it retroactive?

WASHINGTON—Sometimes it’s really hard for non-lawyers to accept the legal world and its incessant nit-picking when the fate of people’s lives is at stake. A case in point is Montgomery v. Louisiana, which the U.S. Supreme Court took up on October 13.

In 2012, in Miller v. Alabama, the Court ruled in 5-4 decision that a mandatory sentence of a person under the age of 18 to life imprisonment was not constitutional, and violates the Eighth Amendment banning “cruel and unusual punishments.” The petitioner Montgomery is asking the Court to apply Miller retroactively. The Louisiana Supreme Court has ruled against making Miller retroactive in the case of Mr. Montgomery, who has now appealed to the Supreme Court.

Henry Montgomery was sentenced by Louisiana to life without chance of parole when he was a teenager for committing homicide. At stake in this case are potentially the lives of hundreds, perhaps more than a thousand prisoners currently serving life without parole (LWOP) sentences in the United States that were handed down when they were minors before the Miller decision. Mr. Mark Plaisance, who spoke on behalf of the petitioner, reckoned the number to be 1,500.

It should be noted that the Court did not rule in Miller that a person under 18 convicted of the crime of homicide cannot be sentenced to life without parole. Even if Montgomery wins at the Supreme Court, he could still be sentenced again to life without parole at a new sentencing. The Court said in Miller, however, that LWOP should be uncommon—a point that was often brought up at the hearing.

What the Miller decision actually did was stop the practice of making mandatory the LWOP sentence for juveniles who had committed murder.

Mitigating Circumstances of the Crime

The details of the case are these. In November 1963, a 17-year-old black youth, Henry Montgomery, was arrested in East Baton Rouge, Louisiana, for the murder of a sheriff deputy, a white law enforcement officer. It was a time of “racial tension and turmoil that included reported cross burnings,” states the brief for the “petitioner,” who is Mr. Montgomery. Montgomery was tried, convicted, and automatically received the death penalty. There was no sentencing phase, that is, no hearing either before a jury or judge to consider age or other mitigating circumstances in the sentencing.

In 1966, the conviction and death sentence were overturned by the Louisiana State Supreme Court that cited evidence of Ku Klux Klan activities a week prior to the trial, according to Montgomery’s brief. In 1969, Montgomery was retried, found guilty, and again automatically received a mandatory LWOP sentence. At the time, “state law precluded Mr. Montgomery from receiving an individualized sentencing hearing at which a judge or jury could consider such mitigating evidence in determining an appropriate and proportionate sentence,” states the petitioner’s brief.

During the trial, experts testified regarding the youth’s psychological state: “immaturity, impetuosity, and failure to appreciate risks and consequences” and the lack of proper parental relationships as he “regarded his mother as an older sister.”

The brief suggests that Montgomery struggled when dealing with police officers. The brief states, “no sentencer could give effect to the circumstances of the offense, including evidence that as a scared youth, Mr. Montgomery ‘shot in panic as the officer confronted him playing hooky,’ as mitigating the sentence.”

None of the above factors could be considered during sentencing upon the jury finding him “guilty, without capital punishment,” which meant in Louisiana, imprisonment at hard labor for life.

Mr. Montgomery has matured since he entered the notorious Louisiana State Penitentiary, known as Angola, more than 50 years ago. Now 69, “he has served as coach … for a boxing team he helped establish, has worked in the prison’s silk screen department, and strives to be a positive role model and counselor for other inmates,” states the brief.

The circumstances of Mr. Montgomery life and the fact that many, perhaps a thousand or more inmates, could be freed or have their sentences reduced is of great interest to many. However, the arguments made before the nine justices never mentioned anything about the difficult circumstances of Montgomery’s childhood and psychological issues.

The arguments that may determine whether Mr. Montgomery dies in prison turned on the legal aspects and whether the high court has jurisdiction to consider the case.

Soon after the Miller decision, Montgomery sought to have his sentence deemed unconstitutional. At this stage, Montgomery can’t appeal his conviction or sentence, which were long ago finalized, but must use what lawyers call a “collateral review” to use the fact that Montgomery’s sentence was unconstitutional and that he is entitled to consideration of a lesser sentence.

Without going into all the particulars of motions and courts involved, the Louisiana Supreme Court determined that “Miller does not apply retroactively to cases on collateral review as it merely sets forth a new rule of criminal constitutional procedure, which is neither substantive nor implicative of the fundamental fairness and accuracy of criminal proceedings.”

Miller said that juvenile homicide offenders should not have to die in prison with no chance for rehabilitation and no consideration of youth.
— Mark D. Plaisance, attorney for petitioner

The above words used by the Louisiana court relied on standards set forth in Teague v. Lane for how retroactivity should be applied. The arguments made at the hearing before the Supreme Court centered around the Teague standards as well.

The second question was whether Miller created a new “substantive” rule or a “watershed” rule of criminal procedure, which have implications to the fundamental fairness and accuracy of the criminal proceeding.

The petitioner’s brief argued that the constitutional prohibition on mandatory life without parole sentences for juveniles meets the substantive standard, and hence it would apply retroactively.

“Miller said that juvenile offenders should not have to die in prison with no chance for rehabilitation and no consideration of youth. That important rule changed the substantive outcomes available (emphasis added). Indeed, this Court said that life without [parole] should be uncommon,” said Mr. Plaisance, for the petitioner.

Justice Elena Kagan said the Miller decision (which she wrote for the majority) constituted a substantive change. Before Miller, a sentence for persons found guilty of homicide had one choice: LWOP. Miller expanded the range of options available for sentencing, and so meets the substantive standard that would make Miller retroactive.

LWOP ‘Left on the Table’

Arguing for Louisiana was S. Kyle Duncan, Esq., Washington, D.C., who thought it significant that a sentence of LWOP was not precluded by Miller. He argued, “My point is … that Miller doesn’t ban [LWOP], and that is determinative for whether something is a substantive rule or not.”

He said, “So leaving the punishment on the table is crucial. If it doesn’t take [LWOP] off, it’s not substantive.” Apparently, Mr. Duncan is saying that Miller does not in itself change Montgomery’s sentence. “The State still has power to impose [LWOP],” he said. “A substantive rule is about whether a State categorically no longer has the power to impose a category of punishment.”

The resentencings of those that have taken place so far … have almost uniformly received sentences that are in terms of years significantly shorter than the life.
— Deputy Solicitor General Michael R. Dreeben

The Justice Department took the side of the petitioner Montgomery and disagreed with Duncan. Deputy Solicitor General Michael R. Dreeben, Esq., as friend of the Court, argued, “The reasons why the Court decided Miller had to do with the reduced culpability of youth and the capacity of youth to mature change, and achieve a degree of rehabilitation that is consistent with something less than the most harsh sentence available for youths who commit murder,” he said.

He went on to say that the Court thought that the harshest sentence would be given to the worse, incorrigible offenders who commit the worst crimes, implying that the Court would not expect most under 18 offenders to fall into that category and deserve to be spend the rest of their lives in prison. The new rule in Miller therefore was a substantive because it changes the likely outcome of sentencing these young offenders.

Proving that the new rule from Miller was substantive, he said, “The resentencings of those that have taken place so far—it’s only been about ten—but those defendants have almost uniformly received sentences that are in terms of years significantly shorter than the life.”

The Court is expected to render a decision by the end of the term in June 2016. Based on the discussion at the hearing, there is a very good chance that the Court will rule that it lacks jurisdiction. That outcome would mean for Mr. Montgomery that he will likely die in prison.