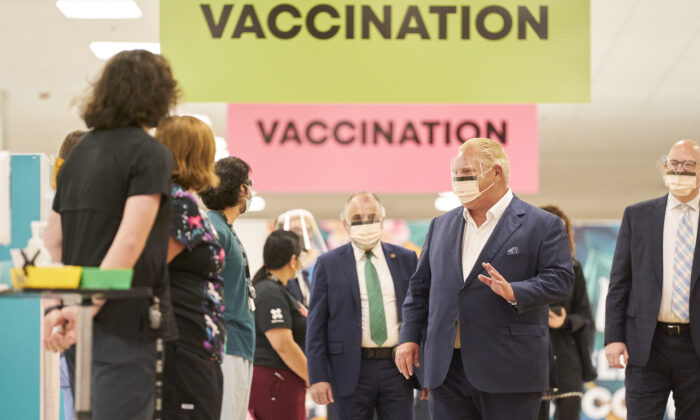 A non-profit legal organization is filing a constitutional challenge in Ontario’s Superior Court of Justice against the province’s COVID-19 vaccine passport mandate.

In a statement, Jorge Pineda, staff lawyer at Justice Centre for Constitutional Freedoms, said Ontario’s vaccine mandates are “ethically wrong” and “illegal,” and the group plans to argue in court that the measures “take away the long-standing rights of citizens to make informed decisions about their own medical care.”

“The Supreme Court of Canada has found that the Charter protects the right to bodily autonomy and informed consent; this is the law, and it is indisputable,”  Pineda said.

“The vaccine passport is a brazen attempt to subvert the Charter and to render its protections meaningless.”

The legal organization is filing the constitutional challenge on behalf of eight Ontario citizens who have declined one or more COVID-19 vaccine doses.

One of the applicants named in the case is Kitchener resident Sarah Lamb, who suffered from adverse effects after taking the first dose of a COVID-19 vaccine, including “numbness from the waist down,” according to the court filing. Lamb requires hospital treatments and is seeing a neurologist about the adverse effects, and has decided not to take a second shot of the vaccine for fear of further medical complications.

Sarah Harjee, another client of the Justice Centre, is a nurse and pregnant mother who refused the vaccine due to fear of its possible side effects on herself and her unborn child. She is opting to wait until more data and studies are available before deciding whether to take a COVID-19 vaccine, the court document says.

Last month, Ontario introduced its vaccine certificate system, prohibiting individuals from accessing certain “non-essential” public settings and services unless they show proof of having been fully vaccinated against COVID-19.

On Oct. 15, the Ontario government further introduced an enhanced vaccine certificate with a QR code that businesses and organizations can use to scan and verify the vaccine certificates. Businesses that refuse to enforce the new restrictions could be fined up to $10,000,000 and owners could also be jailed for up to one year.

“With respect to owners of businesses and organizations, the vaccine passports compel them to enforce unconstitutional laws, as well as laws that would typically be considered to violate human rights legislation,” Pineda said.

“Ontarians should not be forced to discriminate and exclude others from society on the basis of a personal and private medical decision.”

The Justice Centre also argues that while Ontario Premier Doug Ford claimed that the vaccine passport helps contain the spread of the CCP (Chinese Communist Party) virus and prevent further lockdowns, his government has not provided information about how vaccinated people spread viruses.

“Vaccine manufacturers have only promised that those receiving the new mRNA vaccines will suffer less severe symptoms; no promise was made that vaccines stop the spread,” the Justice Centre said in the statement.

The Ontario government has announced that exemptions to the vaccine passport would be limited, and applicable in very few circumstances (pdf), such as individuals that can provide a medical exemption authorized by a physician.