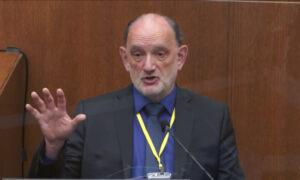 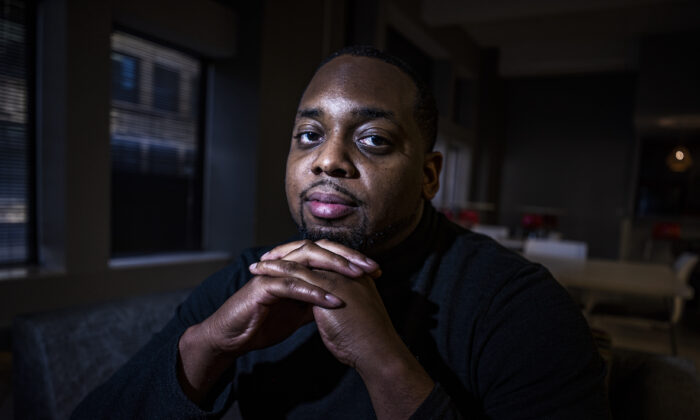 Brandon Mitchell, a juror in the trial of former Minneapolis police Officer Derek Chauvin for the killing of George Floyd, poses for a picture, in Minneapolis on April 28, 2021. (Richard Tsong-Taatarii/Star Tribune via AP File)
US News

A juror in the trial of Derek Chauvin, the former Minneapolis police officer found guilty in the 2020 death of George Floyd, failed to disclose that he attended an event attended by Floyd’s relatives last year, raising questions of impartiality, according to legal experts.

Floyd stopped breathing while being pinned to the ground by Chauvin following an arrest for alleged use of counterfeit money in Cup Foods in Minneapolis in May last year. A jury convicted Chauvin of second-degree murder, third-degree murder, and second-degree manslaughter after closing arguments concluded on April 19.

One of the 12 jurors who deliberated at the trial, Brandon Mitchell, a 31-year-old high school basketball coach who has identified himself, told news outlets in Minneapolis that on Aug. 28 last year, he attended a march in Washington where Floyd’s siblings were present.

A photograph from the event showed Mitchell wearing a black T-shirt with a picture of Martin Luther King Jr. emblazoned with the words “Get your knee off our necks,” and “BLM,” which stands for Black Lives Matter, as well as a baseball cap that says “Black Lives Matter.”

Mitchell on Monday told the Star Tribune that his uncle posted the photo on social media during the event, a commemoration of the anniversary of Martin Luther King Jr.’s “I Have a Dream” speech from 1963.

Mitchell asserted that the event was not a rally for Floyd’s death or against police brutality. All 12 jurors were asked during selection if they had attended any such events as part of a 14-page questionnaire, as well as for their opinions on the Black Lives Matter movement.

Mitchell responded “no” to a question asking if he, or anyone close to him, had ever attended or participated in such events, according to the Star Tribune. Mitchell claimed he had been transparent as a juror about his favorable view of the BLM movement.

“I think they asked if I attended any protests for George Floyd or anything for police brutality. My answer was no because I hadn’t,” he told WCCO-TV in Minneapolis. “This particular march was more so for voting, voter registration. Getting people out to get out and vote for the presidential election that was upcoming a couple months afterward … This was the only thing I attended.”

“It was huge to get people geared for voter turnout, so being a part of that, being able to attend, you know, the same location where Martin Luther King gave his speech was a historic moment,” Mitchell added. “Either way, I was going to D.C. for this event, even if George Floyd was still alive.”

He separately told the Star Tribune that attending the August event was an “opportunity to be around thousands and thousands of black people” and “to be a part of something.”

Other images taken at the event show individuals dressed in BLM T-shirts, carrying BLM flags, and other signs with slogans such as “I Can’t Breathe.”

Attendees called for reform of policing as well as people to vote for Democrats in the 2020 election. The rally saw relatives of Floyd and Jacob Blake, who was shot by a police officer when resisting arrest. Blake was sent to hospital and then rehabilitation following the shooting.

Jury consultant Alan Tuerkheimer told The Washington Post that Chauvin’s defense attorney Eric J. Nelson could use the details to push for an appeal, saying that while image alone is likely not enough to throw out the conviction, “it could be an avenue for the judge to reconsider the case.”

The juror could perhaps be brought in for further questioning to determine whether he was dishonest or biased in his verdict, he said, adding, “That could change the outcome of things; if there is anything that makes him seem that he was not forthcoming.”

Civil rights attorney Brian Dunn said the photo is “undeniably suggestive of a possible bias in this juror” but the key question is whether Mitchell “lied about, or failed to provide complete answers on whether he has engaged in public activism, or whether he has any affiliations with BLM that go beyond the mere wearing of the shirt.”

Mitchell last week became the first juror to reveal his identity and speak publicly about the experience.

“After we deliberated and we had to do some explaining to a few people, breaking it down a little bit further, everybody was on the same page,” Mitchell said on the “Get Up! Mornings With Erica Campbell” podcast.

According to Mitchell, most of the jury was in agreement nearly immediately on convicting Chauvin. But at least one juror wanted to slow down and consider things carefully. Mitchell helped convince those who weren’t sure that they should convict Chauvin on all three counts.

Chauvin now faces up to 40 years in prison. He declined to testify in the trial.