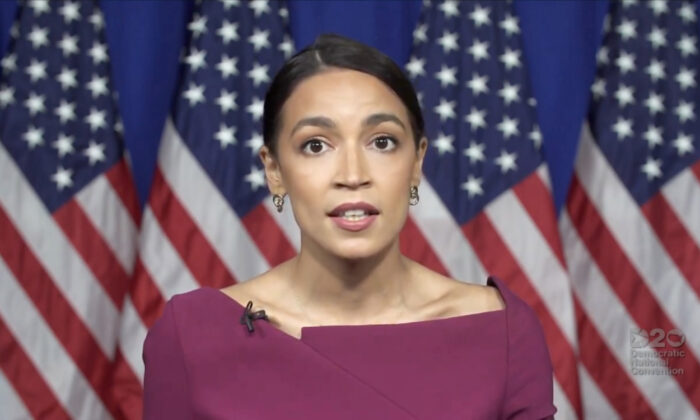 In this screenshot from the DNCC’s livestream of the 2020 Democratic National Convention, Rep. Alexandria Ocasio-Cortez (D-N.Y.) addresses the virtual convention on Aug. 18, 2020. (Handout/DNCC via Getty Images)
2020 Election

Leftists Warned Not to Plot Punishment for Trump Supporters

“Tortious interference has been a law since before the Constitution. It is illegal, and has been for years for a third party to interfere with the legal commerce between one party and another,” Shirley told The Epoch Times on Nov. 19.

Shirley was referring to the socialist New York congresswoman who was dubbed “AOC” by the media when she came out of nowhere to defeat veteran Rep. Joe Crowley in the Democratic primary in 2018.

“Is anyone archiving these Trump sycophants for when they try to downplay or deny their complicity in the future?” Ocasio-Cortez wrote in a tweet on Nov. 6. “I foresee decent probability of many deleted Tweets, writings, photos in the future.”

The purpose of the lists would be to track Trump’s appointees and supporters.

Hari Sevugan, a former Democratic National Committee (DNC) spokesman, responded to AOC by writing on Twitter, “You better believe it. We just launched the Trump Accountability Project to make sure anyone who took a paycheck to help Trump undermine America is held responsible for what they did.”

On its website, Sevugan’s group described its purpose as “to make sure those members of the Trump administration responsible for loosening the guardrails of our democracy are not rewarded with book deals, TV contracts, or six-figure salaries in the private sector based on that experience.”

Sevugan subsequently said his project would be idle, pending the outcome of Joe Biden’s promised effort to unify the country if he becomes president.

Elsewhere, in the days following the Nov. 3 election, other prominent voices on the left proposed various “truth and reconciliation commissions” to investigate the actions and statements of Trump appointees and supporters and to propose civil and/or criminal penalties for them.

University of Illinois Law Professor Colleen Murphy, for example, suggested on Nov. 18 that such a commission is needed because “the uncertainty surrounding the election—both in Trump’s refusal to concede and in the rhetoric and unfounded allegations calling into question its integrity—has generated questions and concerns in a lot of people’s minds about whether there will be a peaceful transition of power.”

And even before the election, such a commission was called for by Sen. Elizabeth Warren (D-Mass.) and others on the left, according to The Nation’s Elie Mystal.

Shirley is best known for his New York Times best-selling books on President Ronald Reagan, his 1976 and 1980 campaigns, and his eight years in the White House (1981–1989).

More recently, however, Shirley resurrected Citizens for the Republic (CFTR), the political advocacy organization that Reagan formed after his loss of the 1976 Republican presidential nomination to President Gerald Ford. Shirley serves as president of the revived CFTR.

Republicans in Congress are speaking out against AOC and others who are seeking to inflict retribution against Trump supporters and appointees.

“No matter how much Democrats talk about unity, the reality is that their goal is to bring cancel culture to Washington,” Rep. Ted Budd (R-N.C.) told The Epoch Times on Nov. 19.

“This list-making and these threats of retribution aren’t just an outrageous example of the radicalism of the socialist left, they also will forever damage the political culture of Congress and make it impossible to ever work with someone you disagree with,” Budd said.

Legal scholars interviewed by The Epoch Times agreed with Budd regarding the damage retributive actions would inflict upon the nation’s political culture.

“If Democrats want to be a majority party, they should listen attentively to what AOC says and then do the reverse,” said constitutional lawyer Walter Olson.

“Instead of keeping enemies lists, think of people on the other side as reachable. Stop trying to force politics into every realm of life. What wins on social media doesn’t win in the country,” Olson said.

“Come to think of it, this all makes good advice for Republicans too.”

Similarly, Institute for Free Speech President David Keating told The Epoch Times that it worries him that “one of the trends that we’ve seen in politics is to try to use the tools of government or the tools of private harassment to punish people with whom others disagree.”

To illustrate, Keating pointed to the threats of physical violence and other forms of harassment inflicted on attorneys representing Trump’s election fraud cases, and on two Republican members of the Wayne County, Michigan, Board of Elections, when they refused to support certifying election results due to their concerns about fraud.

“If the retribution just keeps ramping up after each election, it’s not just going to be on one side,” Keating warned.