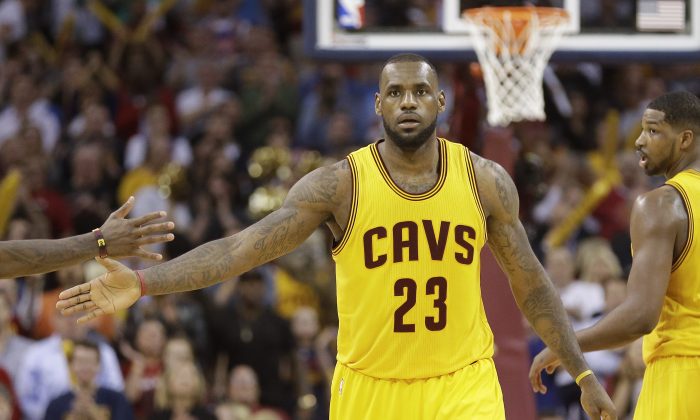 LeBron James’s 38-point, 12-rebound, 6-assist, zero-turnover showing on Tuesday night in Cleveland’s pivotal 106–101 Game 5 win over Chicago—to put the Cavs up 3–2—was yet another virtuoso performance from the game’s best player on the sport’s highest stage.

The hometown superstar, who recently finished third in the MVP voting behind Stephen Curry, also made the defensive play of the game in coming out of nowhere to block Derrick Rose’s potential game-tying fast-break layup try with 48 seconds left.

What made it all the more impressive was that the four-time MVP was playing on a bum ankle, while knowing that the Cavs had to have this one to advance. With the possibility of Pau Gasol being ready for Chicago in Game 6, the time to pounce was Tuesday night and James made sure they did so—as he’s done before.

In 2012, while a member of the Heat, James had Miami in the conference finals against the aging Celtics, who gave Miami all they could handle. With the series tied at two, Boston went down to South Beach and shocked the Heat in Game 5, 94–90, to take what looked like a commanding 3–2 advantage.

With the series back to Boston for Game 6, and the pressure squarely on James’s shoulders (this is before he’d won a title in Miami), “King James” made sure they won. Scoring on an array of post moves in the lane and jumpers beyond the arc, a determined LeBron put up 45 points on an incredible 19/26 shooting while grabbing 15 rebounds and dishing five assists in a 98–79 win that he and the Big Three had to have to win the series, advance to the finals, and justify the whole reason for their getting together in the first place.

In 2013, James again had defending-champion Heat in the Finals—their third of four straight appearances on the NBA’s highest stage. This time against the fundamentally sound San Antonio Spurs.

Down 3–2 in the series and trailing for much of a Game 6 they had to have, it was Ray Allen’s miraculous game-tying three-pointer that sent the game to overtime where Miami won. But it was all made possible by LeBron’s monster 16-point fourth quarter—including a clutch three with 20 seconds left to pull the Heat within striking distance.

Then in Game 7 he poured in 37 points—including a crucial 19-foot jumper that put the Heat up three with 28 seconds remaining, to seal their second straight title.

This year, with Love still out, James may find himself in some more “must-have” games. Fortunately, that’s when he proves he’s the best—even if wasn’t named MVP.