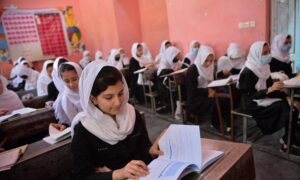 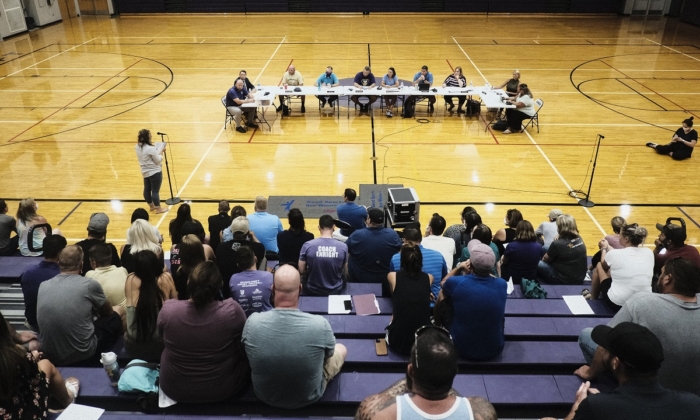 A Board of Education Meeting in Kalamazoo County Schools at the Schoolcraft High School Gymnasium in Schoolcraft, Mich., on Aug. 23, 2021. (Matthew Hatcher/Getty Images)
Viewpoints

Learn From Minnesota: How to Run for School Board…. and Win!

It’s fair to say the rise of Critical Race Theory—the idea that one’s race, rather than one’s character, is the most important thing in one’s life—as the governing principle in many, if not most, U.S. schools at all levels has both astonished and alerted parents across the country to what has happened to our educational system, literally behind their backs.

Many citizens, who have never considered running for anything in their lives, are suddenly interested in running for local school boards to stop this and other related leftist infiltrations of our schools that are turning the American system into something resembling communist training camps.

After all, it’s about the kids.

This is true in Tennessee where I live and apparently in Minnesota where I attended a day-long seminar on how to run for school board and, most importantly and what made this event unique, how to win. (More of that later.)

We were invited by my old friend John Hinderaker of Powerline fame who now heads the American Experiment think tank in Minnesota, which was sponsoring the event.

It was overseen by Bill Walsh, a highly-experienced political operative (in the best sense), who did a superb job of organizing the presentations that were attended by a few dozen school board candidates. (Minnesota has two hundred slots to fill in 2021, many more next year.)

The event was divided in three parts, plus a lunchtime panel, with the first being an extensive analysis of CRT by Catrin Wigfall, a Minneapolis attorney.

She took us back to the 1970s when CRT reformulated the traditional Marxist view of the capitalist oppressing the worker economically into a matter of race, not class, as the dominant, actually all-pervasive, factor.

This was the beginning of “equity,” equality of outcomes (an impossibility, really) taking precedence over what most of us, including Dr. Martin Luther King, have sought and applauded for a long time, equality of opportunity.

It was basically a re-upped version of “affirmative action,” only much worse, leading to a renewed form of segregation, with this segregation being used as a way to upend the Western justice system and ultimately capitalism and freedom.

I was, alas, not surprised to hear from Ms. Wigfall that some teachers’ staff meetings in Minneapolis are already segregated by race. Joseph Goebbels would smile. (Indeed, much of CRT is Goebbels-like.)

One important point she made for the candidates was that CRT supporters in the schools rarely use the term CRT. To avoid controversy, they hide it while still following its principles. The candidates should be aware of that and push back on those principles that the public, polls have shown, doesn’t like anyway.

The next speaker was Chas Anderson, a policy fellow of the American Experiment and once a teacher herself in Phoenix. She got into the nitty-gritty of education finance every school board member should know in order to do their job effectively. (“If someone says it’s not about the money,” as H.L. Mencken said in my favorite quote, “it’s about the money.”)

It was highly-detailed and much of it specific to the very liberal state of Minnesota, well-known to be enamored of government financing practically everything.

Since this is a national/international publication, I will skip through this, except to underline its importance as people move forward in their individual states. (One of the reasons I am writing this is to urge them to do so. This must be done everywhere, ditto courses like this for which Minnesota forms a template.)

Although the first two speakers were excellent, for me the heart of this event was a lunch panel of three active or former school board members led by Walsh, followed by a talk by Walsh. The subject was how to win.

After all, you can know all there is to know about Foucault and the Frankfort School and the provenance of all these creepy Marxist deceptions and bravo for you, go to the head of the class, but just as they say about “swing,” “it don’t mean a thing” if you don’t win.

Along that line, the most interesting thing I heard over lunch came from a current school board member, a woman with a seat on one of the largest boards in the state, governing a population of roughly two hundred thousand, who said the following, ironically echoing the CRT supports mentioned above:

“Don’t discuss CRT, even if you despise, as you should. Don’t name it. It will only confuse people and put them off, become suspicious of you. (Most people don’t know what it is anyway.) Discuss its principles in a general sense and people will agree they are bad and like you enough to vote for you. Be bi-partisan, or at least come off that way.”

This woman’s business card—I’m not revealing her identity or other current board members who may be at risk—says it all: “One Mission, Many Paths.” The sub headline: “Empower Each Student’s Success Story.”

Who could disagree with that? Read into it what you wish.

Is this woman a Zen master or what? People have been searching for a more subtle Alinsky-on-the-right for some time. Maybe she is it.

Of course her approach is contingent, as she, and Walsh underscored later in more detail, on where she is campaigning. If in a heavily-Republican district, it’s probably okay, perhaps advisable, to go full bore, but in most areas good-hearted caution is the way to go. People are politics. Make them like you and they will vote for you. Above all, don’t make them feel stupid.

Much time was given over to obtaining important lists before running. Turn-out, especially in off-year elections, and sometimes even during the big ones, almost always determines who wins.

Lists of who has actually voted and their party affiliation are available. Get them. The list will guide you on where it’s worth campaigning door-to-door. Even in something as small as school board, it’s difficult, often impossible, to knock on them all.

And consider running in tandem with a couple of other candidates because if you do win, you’re going to need like-minded colleagues against an entrenched force of liberal reactionaries augmented by the usually-nefarious local Chamber of Commerce (another reason to get to know your state’s school finance laws, as Ms. Wigfall noted).

There’s a lot more at the American Experiment website, including a history of school finance, campaign tactics, and school board responsibilities. I implore you to go there if you’re thinking of running or know people you think should.

I would give more of their advice here, but apropos of “turn-out,” I am typing this on a plane from Minneapolis to Los Angeles to cover what may “turn out” to be one of the most significant “turn-out” elections of American history—the 2021 gubernatorial recall.

Meanwhile, those who choose to run for school board are the American heroes of our time. Help them any way you can.

Or, as Chairman Mao might say, “Learn from Comrade Minnesota!”