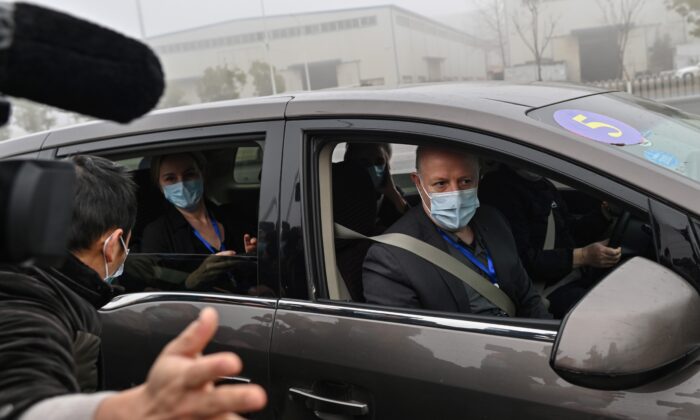 Peter Daszak (R) and other members of the World Health Organization team investigating the origins of the COVID-19 coronavirus, arrive at the Wuhan Institute of Virology in Wuhan, Hubei Province, China, on Feb. 3, 2021. (Hector Retamal/AFP via Getty Images)
Viewpoints

New documents detail how Peter Daszak’s EcoHealth Alliance and China’s Wuhan Institute of Virology were planning to use gain-of-function experiments to artificially insert “human-specific cleavage sites” into coronaviruses in order to increase their ability to infect human cells.

The newly released documents, which are part of a funding proposal submitted to the Pentagon’s Defense Advanced Research Projects Agency (DARPA) program in 2018, detail a blueprint for the creation of a COVID-19-like virus. The ostensible goal of the research was to get ahead of nature by predicting whether viruses might evolve over time to acquire those enhanced traits.

When COVID-19 first emerged, some scientists were puzzled that the virus had a human-specific adaptation at the cleavage site. A study in the science journal Nature noted that the COVID-19 virus “exhibited the highest binding to human (h)ACE2 of all the species tested.”

It was that human-specific binding feature of COVID-19, absent in coronaviruses of the same phylogenetic tree, that has distinguished it from past outbreaks. The virus’s unique ability to bind to human cells makes it highly transmissible and has enabled its rapid spread throughout the world.

COVID-19’s unexplained binding feature has resulted in a pandemic that has cost millions of lives and upended world economies. By contrast, both severe acute respiratory syndrome (SARS) and Middle East respiratory syndrome (MERS) were responsible for less than 1,000 deaths each worldwide.

The documents, which were given to an internet-based group researching the origins of the pandemic, have since been confirmed as authentic by a former Trump administration official. The group, known as the Decentralized Radical Autonomous Search Team Investigating COVID-19 (DRASTIC), has posted the documents online.

The proposal was rejected by the head of the Pentagon’s DARPA program, James Gimlett, principally because it involved dangerous gain-of-function and dual-use research that was neither mentioned nor assessed in Daszak’s proposal.

However, the level of detail contained in the proposal, including the identification of an existing testing site in Yunnan Province, China, raises questions as to the status of the proposed work and whether some of that work actually began before the proposal was submitted.

While it isn’t known whether Daszak ultimately carried out the proposed project, he and his Chinese collaborator, Shi Zhengli, the director of the Wuhan Institute of Virology (WIV), have received funding from other U.S. agencies for other projects. Those projects included grants from Dr. Anthony Fauci’s National Institute of Allergy and Infectious Diseases (NIAID)–which had funded similar gain-of-function research at the WIV–as well as more direct funding from the Chinese Communist Party (CCP).

Daszak’s 2018 funding proposal is 75 pages in length and provides many details that reinforce the theory that COVID-19 was manufactured or enhanced in a laboratory.

Although technical in nature, the proposal states that Daszak and Shi were planning to “introduce appropriate human-specific cleavage sites and evaluate growth potential in Vero cells and HAE cultures.”

In layman’s terms, Daszak and Shi presented a blueprint to artificially insert human-specific cleavage sites into coronaviruses in order to make them more transmissible in humans. The unusual furin cleavage site evident in COVID-19 hasn’t been observed in any other betacoronavirus, a fact that immediately caught researchers’ attention at the outbreak of the pandemic.

That feature of the virus was a main topic of discussion at a secret teleconference headed by Fauci on Feb. 1, 2020. The teleconference was hastily convened by Fauci and British pharmaceutical trust director Jeremy Farrar in response to public reporting of a potential connection between COVID-19 and the Wuhan Institute of Virology. In an apparent reference to the insertion of a human-specific cleavage site into COVID-19, a teleconference participant noted: “We need to talk about the backbone too, not just the insert?”

During the same teleconference, Fauci-funded scientist Kristian Andersen of Scripps Research claimed to be “60 to 70 percent sure the virus came from a laboratory.” Andersen’s collaborator, Edward Holmes, put that figure even higher, at “80 percent.”

Despite their private conclusions about the virus’s potentially engineered features, Fauci’s teleconference group would spend the next 20 months publicly promoting a natural-origin narrative.

Daszak’s and Shi’s proposal also detailed the proposed synthetic reconstruction of viruses from sequence information obtained from other viruses. That means that the WIV was looking to engage in the creation of synthetic viruses. The proposal states that the institute would create three to five of these “new” viruses per year.

The institute also was planning for the aerosol delivery of recombinant coronavirus spike proteins into native bat populations. The ostensible purpose was to vaccinate the bats against viruses that could later jump to humans. The plan to vaccinate bats in the wild using aerosolized delivery of coronavirus spike proteins doesn’t appear to have been previously disclosed, nor assessed, in terms of its associated risks.

Notably, Daszak’s funding proposal also states that he and the WIV already had a “test cave” site in “Yunnan Province, China.”

Yunnan is the size of California. Yet, the proposal doesn’t specify the precise geographic location of the testing site. One possibility is that Daszak’s testing site is the Mojiang Mine, where the WIV spent many years conducting field studies. The existence of the Mojiang Mine was repeatedly concealed by Daszak and Shi and was only revealed when online researchers looking into the origins of the pandemic found references to it in Chinese research papers.

The likelihood of the Mojiang Mine as the test site location appears to be supported by satellite footage that shows the emergence of new buildings at the remote site where three miners died from a COVID-19-like illness in 2012. The Mojiang Mine is the same location where Shi found COVID-19’s closest known relative, a fact that she covered up throughout the first year of the pandemic.

The existence of a “test cave” site at the mine might also explain why Chinese authorities have taken extraordinary measures to prevent anyone from accessing it or the surrounding area. In December 2020, a BBC crew was repeatedly thwarted from accessing the area.

Notably, Daszak’s proposal states that both he and Shi were in possession of more than 180 unique coronaviruses; the sequences of most have never been released. In fact, on Sept. 12, 2019, the WIV deleted its entire database of bat virus sequences in the middle of the night, and those sequences remain missing to this day. At Daszak’s behest, the World Health Organization’s team that was investigating the virus’s origins elected not to ask Chinese authorities about the database.

Daszak’s proposal also revealed that the WIV had facilities for keeping live bats, a point that both he and his collaborators subsequently denied.

The discovery of Daszak’s 2018 proposal has elicited a strong response from a few members of the scientific community. Viscount Ridley, who’s writing a book about the origins of the pandemic, expressed his dismay that Daszak concealed his plans to insert “human-specific cleavage sites” into coronaviruses.

“Now it turns out he had authored this vital piece of information about virus work in Wuhan but refused to share it with the world,” Ridley wrote on Twitter. “I am furious. So should the world be.”

Daszak’s proposal provided a detailed outline of intentions by scientists at the institute to genetically engineer a cleavage site into bat coronaviruses, thereby creating a new virus specifically designed for human-to-human transmission. And to our great detriment, the virus that would emerge a year later in Wuhan has the exact feature that had been described in Daszak’s proposal.

The proposal should be generating wider attention—both inside and outside of the scientific community. And it should also refocus attention on scientists such as Fauci, who were so strenuously pushing a natural-origin narrative.