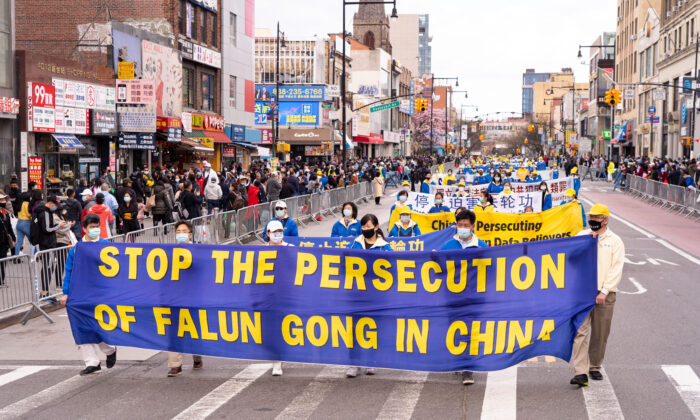 Pingping Yu
Pingping Yu has been a writer, translator, and researcher for The Epoch Times since 2007. She covers a variety of topics related to China, with a strong focus on human rights, economy, and business.
View profile
Follow
biggersmaller
Print

Official documents that The Epoch Times recently acquired shed light on how the CCP (Chinese Communist Party) uses the country’s judicial system as a tool to implement nationwide persecution of people deemed by the Party as threats. The obtained documents were issued internally to judicial branches by The Dandong City Committee of Political and Legislative Affairs (CPLA) and its affiliated CCP organizations.

In China, CPLAs are “a functional department of the CCP that leads and manages the judiciary branch, an important organization to realize the Party’s leadership of the judiciary system,” according to newly published official CCP regulations. From the national to the municipal level, the CPLAs are the actual leaders of the judicial branches including the courts, the Procuratorate, and law enforcement.

The leaked documents include: a 2019 midyear work summary and plans (pdf) of the CPLA of Donggang city; its 2020 priorities summary and the Responsibilities for Social Stability and Security Agreement (pdf) that the CPLA issued to the city’s Intermediate Court, the Procuratorate, the Public Security Bureau, and the local military unit; and a summary of documents issued by the CPLA in the first two quarters of 2020 (pdf). The documents show that the CPLA focuses heavily on enforcing suppressive efforts against religious groups, ethnic groups, political dissidents, and others that the CCP deems as a potential threat to stability. Because of its reach in the judicial system, the military, and all governmental bodies, it can push suppression and persecution into every cell of the society.

The summary of the CPLA-issued documents shows that out of 20 documents issued by the municipal CPLA of China’s northeastern city Dandong, Liaoning Province, in the first half of 2020, six indicate a focus on suppressing Falun Gong, Uyghurs, Christians, government petitioners, and even AIDS and mental disease patients. Four of the other documents contain information about efforts to “crack down on gangsters.” In the past two decades, campaigns in the name of “cracking down on gangsters” often target local private businesses, and in many cases ended in the government throwing business owners in jail and confiscating their company and personal assets.

The spiritual practice Falun Gong is a primary target of the CPLA’s suppression, according to the documents. Exact quotas for persecuting Falun Gong are assigned to and by the CPLAs. In a summary of its 2019 accomplishments, the Dandong CPLA declared its goal of “transforming 20 Falun Gong practitioners by the end of the year.” In the CCP’s language, “transforming” Falun Gong practitioners means to force them to sign papers to denounce their belief and promise to stop practicing, according to FalunInfo.net.

In its 2020 Priorities (pdf), the CPLA ordered the judiciary branches to “empty the inventory” of unconverted Falun Gong practitioners through a variety of methods, ranging from “24-hour surveillance” of Falun Gong practitioners and “closely monitoring their thoughts and actions,” to more severe punishments. The CPLA also forces local neighborhoods to subscribe to its anti-Falun Gong materials and organized propaganda campaigns to incite the public’s hatred of the practice, according to the documents.

Each judiciary branch and the military unit in the area are required to sign responsibility agreements for carrying out the requirements and goals of the CPLA. The Epoch Times obtained the 2017 Responsibility Agreements for the Dandong Municipal Procuratorate, Dandong Public Security Bureau, and Dandong Intermediate Court. All three units specified Falun Gong as a target of suppression. The agreements say that the Dandong CPLA will examine and evaluate each branch’s effectiveness in executing the orders, and the assessment results are used to determine each branch’s incentives or punishments. Officials are rewarded with financial incentives and promotions for meeting their quota, and risk losing their job if they fail to meet the quota.

Such measures motivate and force the judiciary system to adopt a wide range of abusive methods to convert Falun Gong practitioners. Commonly used methods include detention in jails and other facilities, forced brainstorming sessions, physical torture, deprivation of employment and schooling for the practitioners and their families, and more, according to FalunInfo.net.

Because the majority of Falun Gong practitioners refuse to transform, extreme abuse often happens. Falun Gong’s official website Minghui.org recorded 4,343 confirmed deaths due to the persecution by September 2019, and 519,000 cases of torture, according to Minghui’s book “The 20-Year Persecution of Falun Gong in China (pdf).” These statistics are believed to be far lower than the actual numbers.

Wang Changlong, a Falun Gong practitioner and former government worker of Donggang, a subordinate city of Dandong city, described his horrifying experience with torture as a punishment for his refusal to convert: “[The police] shocked me with high-voltage batons and targeted the most sensitive areas of my body,” Wang said in a statement in 2015. “The shock from the batons went through my head, eyes, mouth, neck, armpits, heart, belly button, sides, lower abdomen, genitals, groin, soles of the feet, back, and anus … They went in circles like that, again and again, for over 20 minutes. The pain almost killed me.” Wang was illegally detained, sentenced to three years in a labor camp, and later secretly sentenced to three more years in jail.

Also from Donggang city, Falun Gong practitioner Song Jiwei died in August 2016 at age 60 due to nine years of torture and abuse. Song was arrested four times and imprisoned in the Dandong Labor Camp and Xihu Prison. He suffered various types of torture including beatings, shocking with electric batons, burning with cigarette lighters and cigarettes, being soaked naked in cold water for 24 hours, needle pricks, sleep deprivation, and other forms of torture. According to Song’s statement published on Minghui, the guards in the labor camp put him in a meditation posture, tied his legs tightly together, bent his head towards his feet, and then sat on his back.

In Donggang city alone, from 1999 to 2019, the police launched at least eight large-scale waves of kidnapping Falun Gong practitioners and numerous smaller-scale ones. The kidnappings resulted in over 500 practitioners being captured, according to Minghui.org records. Among them, 16 are confirmed to have died from torture, and many more were disabled or severely injured physically and/or mentally. There are 64 known jail sentences, 176 labor camp sentences, and 190 illegal detentions, according to incomplete statistics from Minghui.org. This data does not necessarily include all of the cases due to the CCP’s strict censorship making it difficult for Falun Gong practitioners to send out information.

The CCP-driven persecution model is executed at every administrative level and across the nation. According to official rules, CPLA orders override all laws, regulations, and common sense, and are expected to be executed without questions. In a similar shion, the CCP controls other government functions and businesses including media, the education system, and the private sector.

Pingping Yu
Follow
Pingping Yu has been a writer, translator, and researcher for The Epoch Times since 2007. She covers a variety of topics related to China, with a strong focus on human rights, economy, and business.