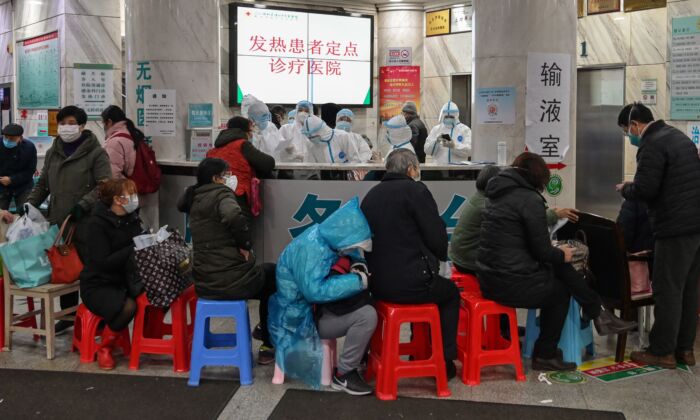 Authorities in Wuhan have consistently underreported CCP virus infections and deaths, according to internal government documents obtained by The Epoch Times from one of the city’s districts.

Experts who conducted statistical modeling, eyewitness accounts from locals, and documents previously provided to The Epoch Times have shown that Chinese authorities concealed the true scale of the outbreak in Wuhan and other parts of China.

The latest documents reveal how deception began at the low levels of government.

There are 13 districts in Wuhan. As Huangpi district is a residential section of Wuhan, the outbreak there should be less severe than denser parts of the city.

But in 20 classified documents from the Huangpi district health bureau, data revealed that the district alone had many patients hospitalized with COVID-19 symptoms—making the publicly reported data by the Wuhan Health Commission likely false.

Every day, district health bureaus fill out a statistic form issued by the Wuhan Health Commission to report total CCP virus cases within their jurisdiction. These numbers are not disclosed to the public; Wuhan only publishes a total for the entire city.

The Epoch Times has obtained copies of those forms for dates in January and February.

The forms contain detailed information about patients who visited 22 hospitals located in Huangpi district, including the contact person and their phone numbers.

On Jan. 12, the Wuhan government did not officially report any new infections or suspected cases. At the time, China had not yet developed a diagnostic test kit for detecting the virus and official criteria for confirming infections were not transparent.

But the statistic form showed that 202 patients visited hospitals in Huangpi district on Jan. 12 after developing a fever—one of the symptoms of COVID-19.

Later in the month, the Wuhan government appeared to change its tallying method. On the bottom of the form for Jan. 29 was a newly added reminder for district governments: “The daily tally of new infections will only count patients who were treated at the 26 hospitals designated for COVID-19-only in Wuhan.”

Because there are only two such designated COVID-19 hospitals in Huangpi district, the completed forms for Huangpi only listed data from two hospitals. That means COVID-19 patients who checked into other hospitals in the district were no longer counted.

The Wuhan Health Commission officially reported 356 new infections in the city on Jan. 29.

Then, in the statistic form for Feb. 11, the column for new infections mysteriously disappeared. There was only a column to report the number of patients who were being treated for COVID-19 at the two designated hospitals in Huangpi.

Another document, dated March 14, showed detailed information for all confirmed deaths due to COVID-19 in the district until that date.

The Epoch Times obtained a section of this report, showing 31 names with their ID numbers and home addresses. A 33-year-old, Xu Gang, died at the Chinese Medicine Hospital on Feb. 19, and 90-year-old Peng Xihui, who died at the Mulan Hospital, had no specified date of death.

The location of death for 22 of the patients was at designated hospitals in Huangpi district and broader Wuhan. Eight of them did not list a location—meaning they likely died at a non-designated hospital or at home.

This suggests there could be more such undocumented patients who may have died of COVID-19 but were not counted in the tally because they were not checked into a designated hospital.

The Huangpi district bureau also kept records of medical staff who were showing symptoms of COVID-19, from Feb. 4 to Feb. 9.

For example, the district bureau noted that three medical staff showed symptoms on Feb. 4. That day, according to the internal data, the district saw a total of 16 new infections.

The records did not say clearly whether the medical staff were diagnosed with COVID-19; by that time, authorities had already developed testing kits.

But if they were, that meant medical staff accounted for 18.75 percent (three divided by 16) of the total infections that day.

On Feb. 7, five medical staff had symptoms, making up 23.8 percent of the total (21) diagnoses that day.

Medical staff are among the most vulnerable to infection.

Li Wenliang, one of the eight whistleblowers who first publicized information about a “SARS-like” outbreak in December 2019, died of the CCP virus on Feb. 7 morning, according to state media. He was 34.

On March 3, Li’s supervisor Mei Zhongming also died of the virus, at the age of 57, while hospitalized at the Jinyintan Hospital.

Many more deaths have been reported in local media.

The family member of an individual living at the campus for the Hubei General Hospital—a residential compound for the facility’s roughly 1,500 medical staff and their relatives—previously told the Chinese language Epoch Times that more than 500 people living there have been diagnosed with the virus.