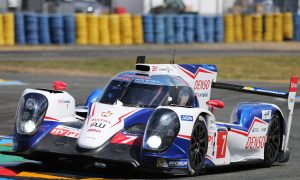 Fourteen hours into the race, the #7 Toyota TS 040 Hybrid which had led the Le Mans 24 since seven o’clock in the evening, stopped on the side of the course at Arnage Corner, with undetermined mechanical issues.

Driver Kaz Nakajima climbed out of the car and tried to repair the car himself, following instructions delivered from the pits via radio, but the car, which led for 163 of 223 laps, dropped to fourth overall.

The second Toyota, the #8, continued to circulate untroubled in sixth place, eleven laps behind the leaders. The #8, like the #7, had shown no signs of mechanical fragility; the #8 was only 11 laps down because driver Nicholas Lapierre crashed during a sudden cloudburst.

With the Toyota sidelined, the #2Audi R18 e-tron quattro of Benôit Tréluyer inherited the lead, three laps ahead of the #20 Porsche 919 Hybrid of Brendan Hartley. The second Audi, the #1 of Lucas Di Grassi, sits a further 90 seconds back in third place.

With nine-and-a-half hours left in the race, there is time for multiple reverses of fortune.  The #7 Toyota has been retired, but the #8 is running strong. Either or both of the remaining Audis, could break, be repaired, and break again. Either of the Porsches could fail or finish in first place. The toughest nine-and-a-half hours of the race are beginning.