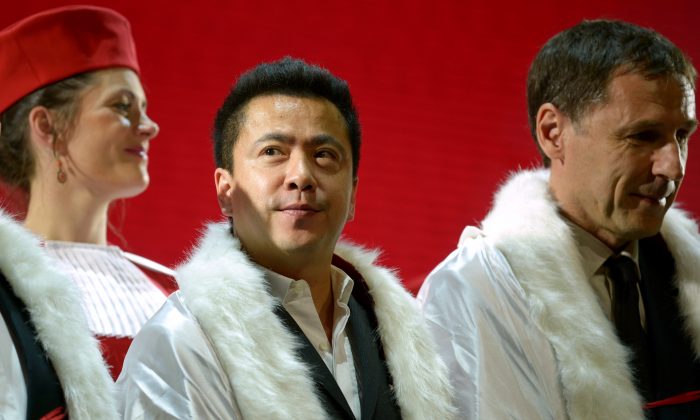 A leading Chinese film studio, Huayi Brothers, has announced it will deepen its ties to the Chinese Communist Party (CCP), after suffering huge financial losses this past year and the apparent cancellation of a high budget war film, “The Eight Hundred,” by Party censors.

On July 8, Huayi Brothers held a conference to announce the establishment of a Party organization within the company, the “CCP Huayi Brothers Media Co. Committee,” in a move to “solidly integrate the Party’s work into the [studio’s] film content,” said the studio’s party secretary Cao He, according to a July 8 report by state-run media The Paper.

The Party should play a leading role in every stage of the filmmaking process, Cao added.

The studio joins another 1.58 million private firms that have embedded party units in their companies. Party organizations, as designed to make sure employees adhere to the regime’s rules, are already a mandatory part in the workplace of all of the country’s publicly-listed firms. Firms were often eager to follow Party orders in order to stay out of trouble.

The company’s CEO, Wang Zhongjun, said during the ceremony that the set-up of the committee would ensure “the Party’s core socialist values … are more deeply ingrained into the blood of the company.” Wang is himself a Party member.

As of June, Huayi has 115 Party members out of the 1,933 employees, with 85 percent of them being millennials born after the 1980s, according to The Paper.

About 94 percent of Chinese private business owners believed that it was important to maintain relationships with the government, although only less than 4 percent of the companies expressed an interest in the Party’s development, according to a 2018 report from South China Morning Post citing an investigation by now-defunct Beijing-based think tank Unirule Institute of Economics.

Huayi Brothers has previously organized several events to express its Party loyalty since last year, including organizing film screenings and major exhibitions in partnership with Party mouthpiece The People’s Daily. In April, the company organized a themed event called “Party-building classroom” to study the communist party leadership conferences and boost the communist spirit.

One of China’s most established entertainment companies, the Beijing-based Huayi Brothers has suffered a number of financial blows in the past year.

Huayi posted a loss of around $1.1 billion yuan ($158 million) in the past year, according to its annual financial report released in April.

Two of the studio’s films poised to be summer hits—Chinese war film “The Eight Hundred” and comedy Tiny Little Wishes—were canceled days before the films’ scheduled release in July as a result of apparent censorship.

Chinese netizens suspect “The Eight Hundred,” dubbed China’s version of “Dunkirk,” was censored because it depicted the CCP’s old political adversary, the Kuomintang, in a favorable light. The CCP defeated the Kuomintang in a civil war to take control of China in 1949, forcing the latter to retreat to the island of Taiwan.

Following the cancellation of “The Eight Hundred,” Huayi’s shares, traded on the Shenzhen Stock Exchange, plunged 8 percent. The company’s stock has also been on a consistent decline since June, dropping by over 20 percent compared to its peak at June 13.

As a result of the box office slowdown, the company was forced to sell some of its projection equipment for $40 million yuan ($5.8 million) to pay for operating costs, Beijing Business Today reported. Huayi said in a July 3 announcement that they would rent back the equipment for another 2 years after the sale.

Wu Zuolai, a U.S.-based Chinese political commentator, believed that July 8 announcement suggests the Party is renewing its attempts to tighten its control of private businesses.

“In the 50s all private businesses were nationalized and business owners had to hand in their property to the Chinese Communist Party. Right now the [CCP] can’t achieve that, so they adopted a new way: the Party organization inserts itself into the company so as to assert control over it,” Wu told Radio Free Asia on July 9.

A Huayi that is influenced by Party dictates would assist the regime in further propagating its agenda through media, Wu added.

“Later on all of the content that [Huayi Brothers] created will have some sort of Party promotion, at the very least it won’t stray from the Party’s fundamental principles,” Wu said.

“With the increased Party’s censors, the living space for creative and original works will gradually diminish, to the point where art becomes one with politics.”