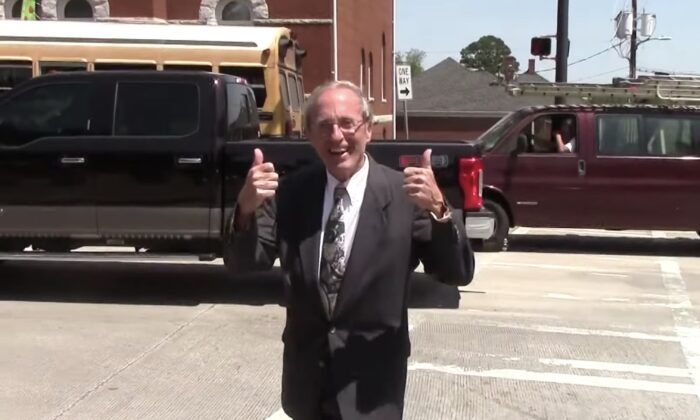 Garland Favorito outside Henry County Superior Court after winning a victory in a suit to allow an audit of Fulton County's November 2020 election, in McDonough, Ga. on May 21, 2021. (Screenshot Nydia Tisdale/The Epoch Times)
Viewpoints

I already had scheduled an interview with Garland Favorito—founder of Voter GA—to discuss the latest judicial decisions in his group’s ongoing investigation of possible voter fraud in Georgia during the recent presidential election, when news broke that the New York Supreme Court had suspended Rudolph Giuliani’s license to practice law in the state.

The written decision—more like a political tract than a legal brief—referenced the Georgia audit. So, before anything else, I asked Favorito about it, wondering if he had something to say about what happened to the man we used to call “America’s mayor.”

At first, Favorito simply said, “The New York Supreme Court made false assumptions about Georgia on it and used them improperly against Giuliani.”

Favorito went silent. I thought that was it—he might even want to pull back—but the opposite was true. He wanted to say something stronger, with more evidence, and later sent me the following two paragraphs via email:

“The New York Supreme Court falsely concluded that the Georgia hand count audit ‘confirmed the results of the election with a zero percent risk limit.’ The truth documented by expert witness testimony at our May 21st hearing is that the hand count audit had a 21% error rate. That expert witness testimony and recently released public ballot images confirm the correctness of Giuliani’s argument that the vote count was inaccurate.”

“The New York Supreme Court also falsely disagreed that the State Farm Arena video ‘can be viewed as evidence of illegal conduct during the vote tabulation process.’ We identified four violations of Georgia election transparency law in the video. In addition, the video clearly shows potentially illegal duplicate ballot scanning. Furthermore, the hand count audit results indicate thousands of duplicate ballots were scanned into the results further confirming Giuliani’s argument that the vote count was inaccurate.”

[All bolds are Favorito’s. The italics are direct quotes from the New York State Supreme Court.]

I first met Garland months ago, when we sat together in the aforementioned State Farm Arena watching that hand-count audit of the Georgia vote.

At that time, he got up to show me how one of the several Dominion machines could be connected to the internet by a short ethernet cable to a nearby server. A Dominion representative was standing a few feet away, nodding approvingly.

Favorito is a retired IT (information technology, as we all know by now) professional, now devoting his life to electoral integrity. He is also, from my admittedly few contacts, a thoroughly honest guy of the “Mr. Smith Goes to Washington” sort, just the kind of person to put the fear of Jehovah in the Democrats and the #NeverTrumpish Georgia GOP hierarchy, notably Gov. Brian Kemp and Secretary of State Brad Raffensperger, both of whom seem headed for the primary chopping block.

The latter is under suspicion for all sorts of covert activities, including having his agents snoop into at least one box of locked ballots without notifying anyone.

And speaking of the fear of Jehovah in Democrats, another Garland (Attorney General Merrick Garland) apparently has Georgia in his sights. For the first time, the Biden administration is suing one of the states for their new election laws. They claim Georgia is discriminating against non-white voters through its Election Integrity Act of 2021. (How fishy is it Democrats think it’s so hard for black people to obtain ID cards or go to polling places?)

Call it Garland versus Garland. I’m going with the first-name variety who also told me during the interview that he has been deluged with more interviews than ever as his appeal draws closer. Many—such as the left-leaning Atlanta Journal-Constitution—are doing their best to discredit him, implying in those interviews that Voter GA has failed, using such minor details as the judge denying the use of high-powered microscopes in the recount (something Favorito says they never wanted in the first place) as evidence of that failure.

But I’ll let Garland (first name) speak for himself:

“We are pleased that the court has ruled in our favor again for the fifth time. The ruling substitutes Defendants by replacing currently named government organizations with individual board members we named originally in our lawsuit. It also moots Don Samuels’ [Georgia government lawyer] attempt to dismiss our case. This continues the string of victories we have including how we obtained the original protective order, conditional approval to inspect ballots, access to ballot images, and the order to unseal the ballots.”

Favorito tells me it will be another month before the next ruling from the judge. Voter GA, he says, will be taking that time to strategize.