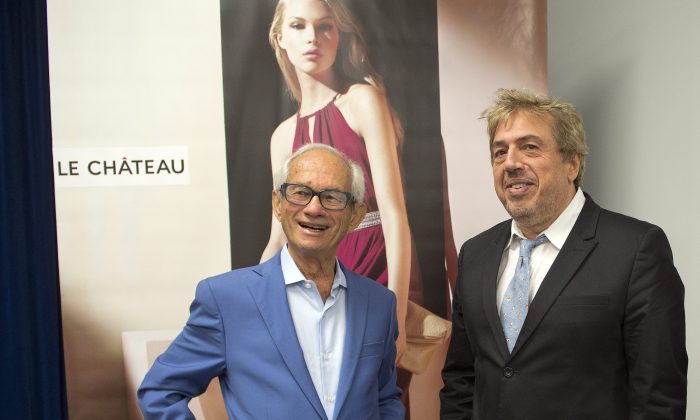 Le Chateau Reintroduces Itself to Young Professionals in Canada

MONTREAL—Le Chateau hopes to reverse years of financial losses by introducing a more mature line to customers who were loyal in their rebellious youth but are now seeking fashionable office attire.

“We were young and rebellious when we started in the ’60s and that whole era of society has changed, so we’re now having to offer our product in the right way for today’s culture,” founder Herschel Segal said in an interview after the company’s annual meeting on Wednesday, July 15.

The Montreal-based retailer has been looking for ways to stem four years of losses amid declining sales.

While Segal said the company has moved slowly to reposition itself, it is regaining its footing and making the right moves.

That includes going more upscale by targeting working men and women in their 20s to mid-30s.

Executive vice-president Franco Rocchi said the targeted customer can also be older and include those who fondly remember shopping at Le Chateau before they had jobs, got married, or had children.

“We were a rite of passage and a lot of the market remembers us as that, and we want to let them know that our product today has now grown up.”

With the help of ad agency Sid Lee, Le Chateau plans to promote its more mature styling in an ad campaign next month as it prepares to introduce a loyalty card in 2016 and expand its online wedding boutique launched last spring.

Le Chateau has been developing the change over the past few years, including the rollout of a new store concept that features better lighting, more comfortable fitting rooms, and grouping clothing displays by use, such as daywear, career, and special occasion.

Rocchi said he’s optimistic about a turnaround because the new store concept that has been adopted in several top locations in Canada has shown sales improvement even without any advertising support.

A total of 20 stores will be remodelled by the end of 2015, representing about 10 percent of the company’s Canadian network. More will be added as leases are renewed.

Le Chateau also plans to continue closing underperforming stores. Its e-commerce business is growing by double digits but accounts for less than 10 percent of overall business.

Retail analyst Randy Harris of Trendex criticized the pace of change as being too slow. He said he doesn’t see the online wedding offering working and added that efforts to chase older former customers would blur the image Le Chateau has tried to create.

“They’re looking for Hail Marys,” he said. “The thought that you can get a woman who said: ‘Gee, I bought my disco clothing when I was 21 and now I’m 40 and I’m going to come back to Le Chateau’—that dog doesn’t hunt.”

But Jane Silverstone Segal, who replaced her husband as chairman and CEO, assured shareholders that Le Chateau has the right strategy for a brighter future in a competitive retailing segment that has seen several failures.

“Despite our results, we remain confident in our long-term goals. We are increasingly positioning our brand to appeal to younger professionals,” she said.