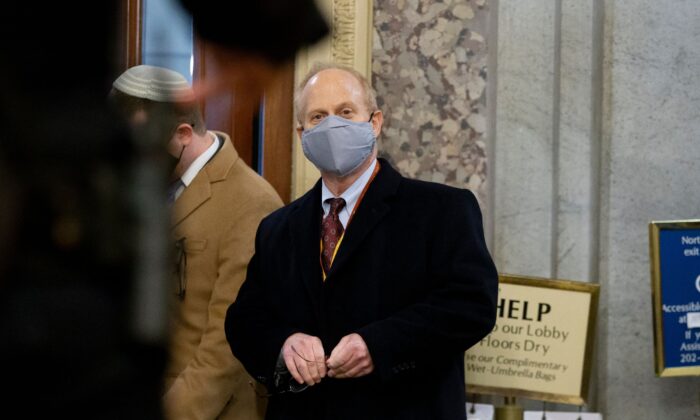 David Schoen, a lawyer for former President Donald Trump, arrives at the U.S. capitol for the third day of the second impeachment trial of Trump, on Capitol Hill in Washington on Feb. 11, 2021. (Michael Reynolds/Pool/AFP via Getty Images)
Donald Trump

Lawyer Who Represented Trump During Impeachment Says It Was an Honor

One of the lawyers who represented former President Donald Trump in the recent impeachment trial said in a new interview he was honored to do so.

“I was standing up for the Constitution and the president, and I was honored to do it. And the idea that you should be embarrassed somehow to be Jewish and do that—I don’t understand it,” David Schoen told the Jewish Press.

Schoen helped Trump win an acquittal in the Senate on the charge of inciting an insurrection.

The Alabama-based lawyer said he’s always taken the position that everyone deserves proper representation, regardless of what type of person they are.

“Alan Dershowitz is kind of a model for that. He has always been somebody I looked up to in that regard. He says, ‘That’s a lawyer’s job. Sometimes you have to represent the worst of the worst.’ But that wasn’t the case here. I was honored to do it. I can’t imagine saying ‘No’ to a president of the United States who asks you to represent him,” Schoen said.

The lawyer noted that he represents capital murder cases occasionally on a pro bono basis and often receives feedback that his work is fantastic.

“Now I represent the president of the United States and people say, ‘Oh, my God, you’re a horrible person. How could you do this?’ It’s unbelievable,” he added.

Schoen has faced so-called cancel culture because he chose to represent the former president. A law school canceled a course he was going to teach, and he was suspended from a lawyer email list.

Schoen told The Epoch Times that he received threats during the trial, with one person sending six lengthy emails detailing what he wanted to do to the lawyer and his family. He said he spoke several times a day with Trump during the trial and the Republican was very supportive, as were many GOP senators.

Schoen considered the repercussions of taking the case but ultimately decided to accept the offer.

“But I take a lot of controversial cases. I take a case because I believe in the principle underlying the case, generally,” he added. “I’ve been a civil rights lawyer for 36 years. When I lived in Alabama, I lived behind an electric fence with two German shepherds and I had to carry a gun every place I went. So I faced many threats for different kinds of reasons over the years. But if you let that stop you I suppose you’re in the wrong business.”